U Sports
CHL
by
CHL/LCH 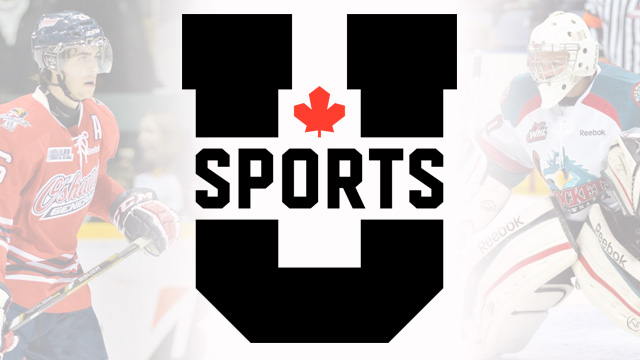 U Sports unveiled its roster for a two-game exhibition series between the U Sports men’s hockey all-stars and Canada’s National Junior Team prospects.

The two-game set, which was announced last month, will take place at the Centre d’Excellence Sports Rousseau, home of the QMJHL’s Blainville-Boisbriand Armada, on Monday, Dec. 12 at 7 p.m. ET and Tuesday, Dec. 13 at 1 p.m. ET as part of the National Junior Team’s preparation for the 41st IIHF World Junior Championship in Toronto and Montreal (Dec. 26 – Jan. 5).

The 23-player U Sports lineup – all but one with CHL experience – is comprised of 11 standouts from the OUA conference and six apiece from the AUS and Canada West leagues. Twelve of the 23 players have represented U Sports against the World Junior hopefuls in the past, including 11 returnees from last year’s inaugural national all-star squad which split the two-game series, winning the first game 5-4 in a shootout. The OUA contingent will look to make their case for a spot on the 2017 Winter Universiade roster, with head coach Brett Gibson also serving as the FISU Games bench boss.

“It is a fantastic opportunity for these 23 U Sports athletes from across the country to showcase how great of a product we have,” said Gibson. “It also comes with a great responsibility to be a small part of the preparation for our Canadian under-20 team in their quest for a gold medal.”

Protecting the U Sports net in Boisbriand will be goaltenders Kevin Bailie from Queen’s, Corbin Boes from Dalhousie and Jordon Cooke from Saskatchewan, who all suited up in last year’s event.

Boes, in his third season with the Tigers, leads the nation in save percentage (.933) while Cooke sits third in goals-against average (1.98) among goaltenders with at least 10 games played.

Murray, who was named the AUS nominee for last season’s BLG Award as Male Athlete of the Year, ranks first in scoring by defencemen with nine goals and 28 points in 18 games this season.

Saulnier, who spent four seasons in the QMJHL with Moncton, recorded a U Sports-leading 33 points in 18 games during the first half of the regular season.

Asselin, who starred in the QMJHL with Montreal and Chicoutimi, was voted U Sports player of the year in 2015-16 playing for UQTR. The former Juniors and Saguenéens forward has 12 goals in 10 games for the Patriotes.

Hockey Canada is the governing body for hockey in Canada and a member of the International Ice Hockey Federation (IIHF), with a membership through its 13 provincial branch associations of over 700,000 players, coaches and officials. Hockey Canada is a not-for-profit organization that creates leading-edge hockey development programs for its members to deliver in communities across Canada; provides consistent rules and regulations and various other membership services from coast to coast to coast; manages numerous regional, national, and international hockey championships and events; and leads the operation of all teams that represent Canada in international ice hockey competition. Hockey Canada’s mission is to “lead, develop and promote positive hockey experiences.” For more information on Hockey Canada, please visit www.hockeycanada.ca or follow through social media on Facebook and Twitter.

U Sports is the national brand for University Sports in Canada. Every year, over 12,000 student-athletes and 500 coaches from 56 universities vie for 21 national championships in 12 different sports. U Sports also provides higher performance international opportunities for Canadian student-athletes at Winter and Summer Universiades, as well as numerous world university championships.