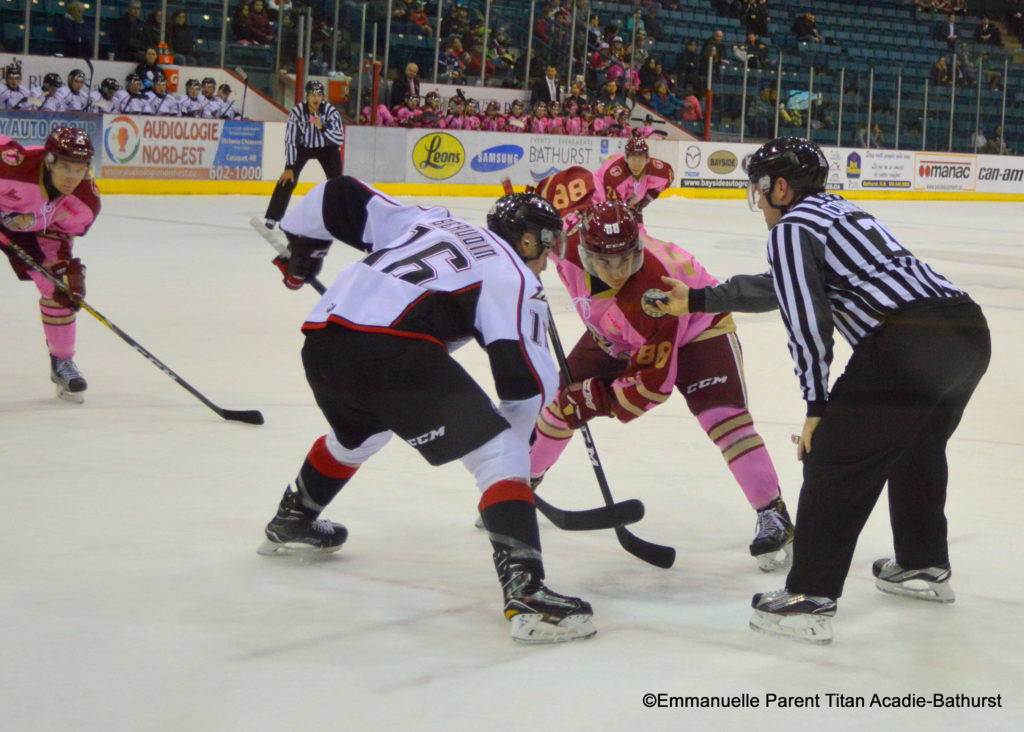 The Acadie-Bathurst Titan played host to their annual Pink in the Rink game in support of breast cancer research and welcomed the Rouyn-Noranda Huskies to the K.C. Irving Regional Centre for their only visit of the season. With 1,656 in the stands, the Titan skated away with a five-to-three victory.

Playing in his 200th QMJHL game, Christophe Boivin opened the scoring with 8:46 to play in the first period, firing home his eighth goal of the season on the power play. Assists on the game’s opening goal would go to Christophe’s younger brother Félix and Antoine Morand. Daniil Miromanov would capitalize on a miscue by Huskies goaltender Samuel Harvey to score his first goal of the season with Samuel L’Italien and Jeffrey Viel picking up the assists. Before the end of the period, Mathieu Boucher would get the reigning league champions on the board with his sixth of the year to make it a 2-1 game after 20 minutes of play.

The two teams would exchange goals in the second period with rookie Tyler Hinam scoring his first goal in the QMJHL to tie the game at two goals apiece. The stalemate would last until Jeffrey Viel would find the back of the net with 2:22 remaining in the period for his fourth goal of the season with the lone assist going to defenceman Jérôme Gravel, giving the Titan a 3-2 lead with two periods completed.

The Titan would once again employ their shutdown defence in the third period, keeping the Huskies at bay despite mounting pressure. After the Huskies pulled their goaltender for an extra attacker, Jonathan Bourcier would seemingly put the game out of reach scoring his fourth of the season into the empty net with 1:09 to play. Christophe Boivin would pick up an assist on the goal. With 21 seconds remaining in the game and their net once again empty, Rouyn-Noranda would pull within one goal as Bruno-Carl Denis scored his third of the season, but it was all for naught as Viel would ice the game with his second of the game and fifth of the season from Dawson Theede, scoring the Titan’s second empty-net goal of the game.

Samuel Harvey stopped 26 of 29 shots, suffering just his second defeat of the season dropping his record to 8-1-0-1 on the year. Titan goaltender Reilly Pickard picked up his fifth win in his last six games, stopping 28 of 31 shots, improving his record to 7-3-1-1.

Special Teams saw the Titan go one-for-five with the man advantage while the Huskies were shut out on seven power play opportunities.

Playing in his 200th game in both the QMJHL and in a Titan uniform, Christophe Boivin recorded a goal and an assist giving him a team-high 18 points on the year. He currently ranks 11th overall in games played in a Titan uniform and will enter the Top 10 when he plays his 206th game.

Nicolas Dumulong was out of the line-up for Sunday’s game, serving the first of an undetermined number of games in an indefinite suspension brought down by the league early Sunday morning. In his place, 17-year-old rookie defenceman Jérôme Gravel was inserted into the line-up and recorded his first QMJHL point, assisting on Jeffrey Viel’s second period goal.

OVER $10,000 RAISED FOR BREAST CANCER AWARENESS

With jersey bids, raffles and collections made on Sunday afternoon, the Acadie-Bathurst Titan raised over $10,000 for breast cancer research.

The final week of October is upon us, and with it brings the return of the QMJHL’s Rivalry Week. For the third year in a row the Titan are being matched up with the Charlottetown Islanders in a two-game series. The Titan and the Islanders split the first Rivalry Week series two years ago and took a 3-2 edge on points gained last season. This will also mark former Titan captain Guillaume Brisebois’ first return to Bathurst since being traded at the 2016 QMJHL Entry Draft. Tickets for Friday night’s 7pm game can be purchased at the K.C. Irving Regional Centre box office, by phone at 549-3200 (local) or 1-877-549-3200 (toll free) and online at admission.com