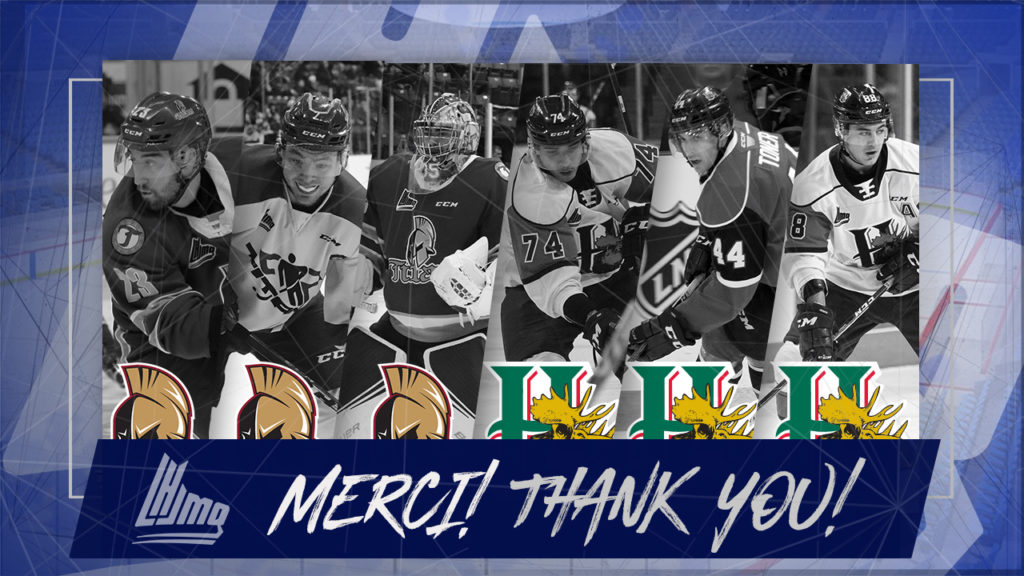 The unprecedented end to the 2019-2020 QMJHL regular season means two clubs have already played their final contests. Unfortunately, that also means that six talented overagers have seen their junior careers abruptly come to an end.

Despite failing to qualify for the President Cup playoffs, the Acadie-Bathurst Titan nonetheless saw an improvement of 12 points over their 2018-19 showing. Leading the way on the backend was team captain Yan Aucoin. Obtained in the off-season from Baie-Comeau, the l’Etang-du-Nord, Quebec native completed a 335-game QMJHL career by setting personal bests in both goals (10) and points (32).

The Titan posted 12 victories on the year, all of which were earned by goaltender Tristan Berube. The fourth-year veteran from La Pocatiere, Quebec, acquired from the Rimouski Oceanic during training camp, finished his final “Q” campaign with a GAA of 3.56 and a save percentage of .903% while providing a presence between the pipes that kept his club in several games over the course of the season. The former Gatineau Olympiques starter will be returning to that area next season as a member of the University of Ottawa Gee Gees.

The last piece of the overager puzzle for Acadie-Bathurst was obtained in November from the Drummondville Voltigeurs. Remy Anglehart completed his fourth full season in the QMJHL as a first-time 20-goal scorer to lead the Titan in scoring. Overall, the product of Port-Daniel, Quebec racked up 29 goals and 54 points in 64 games between the two clubs. He also departs the league having played a key role in two long playoff runs, with Drummondville (2019 league semi-finalists) and Blainville-Boisbriand (2018 President Cup finalists). Anglehart will be aiming to return to the postseason with a rising U de M Aigles Bleus squad in AUS action next year.

The Halifax Mooseheads made a very clear statement over the course of the 2019-20 season that the future is the focus. However, this young roster was balanced by a trio of savvy veterans, including center D’Artagnan Joly. Halifax was the fourth “Q” stop for the Gatineau, Quebec native, who was picked up from Rimouski in December. A Calgary Flames prospect, Joly completed his fourth full year in the league with 31 points in 35 games, including 19 points over his final 16 games.

The day before acquiring Joly, the Mooseheads welcomed winger Kevin Gursoy into the fold. The product of Windsor, Ontario entered the league as a free agent invite of the Saint John Sea Dogs in 2017. Making his way first to Charlottetown, then to Halifax, Gursoy registered 30 points in as many games for the Moose, part of a 56-point campaign to cap off his “Q” career as the team’s leading scorer.

The club welcomed back a familiar face at the trade deadline when they resigned defenseman Denis Toner for the balance of the campaign. The Saint-Andre, New Brunswick native parlayed a strong training camp in 2018 into a spot on the Memorial Cup host Mooseheads squad. Making his way back to Halifax after spending the first half of the season with the MHL’s Grand Falls Rapids, Toner recorded seven points in 26 games. His next hockey chapter will take him to the AUS, where he’s slated to suit up for the U de M Aigles Bleus in 2020-21.

The QMJHL thanks all of these players for their hard work and dedication over the course of their careers in the league and wish them the best in all future endeavours.