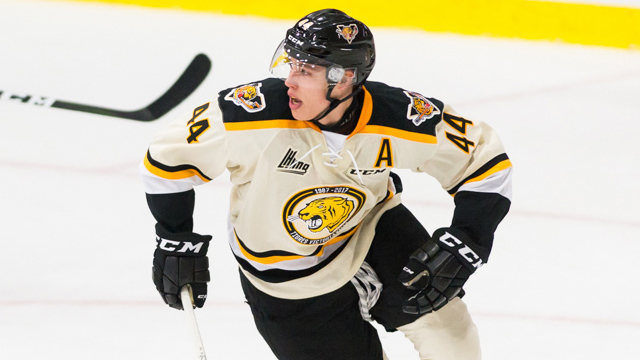 Toronto, ON – The Canadian Hockey League today announced that Anaheim Ducks prospect Maxime Comtois of the Victoriaville Tigres is the CHL Player of the Week for the week ending March 4 after recording 12 points in three games scoring five goals with seven assists and a plus-minus rating of plus-8.

Comtois earns the award for the second time in four weeks after a trio of multi-point performances extended his personal point-streak to 16 games and helped the Tigres extend their winning-streak to six carrying an overall record of 37-20-4-2 into the final two weeks of regular season play.  Comtois and the Tigres began their three-game eastern road trip on Wednesday with an 8-2 victory over the Halifax Mooseheads with the power forward scoring twice with two assists earning first star honours.  He delivered a career-high five-point performance on Friday with a goal and four assists and was named second star of a 9-0 win against the Charlottetown Islanders, then wrapped up the week on Saturday with two goals and one assist as second star of a 7-3 win over the Saint John Sea Dogs.

A 19-year-old from Longueuil, Que., Comtois is playing in his third season with the Tigres who selected him third overall in the 2015 QMJHL Entry Draft.  In 50 games this season he’s scored a career-high 41 goals along with 35 assists for 76 points.  Comtois was a member of Canada’s National Junior Team winning gold at the 2018 IIHF World Junior Championship and just recently signed his entry-level contract with the Ducks who selected him in the second round of the 2017 NHL Draft.

Also considered for the award this week was Vegas Golden Knights prospect Cody Glass of the Portland Winterhawks with five goals and five assists for 10 points in four games, and St. Louis Blues prospect Robert Thomas of the Hamilton Bulldogs who recorded seven assists in three games.