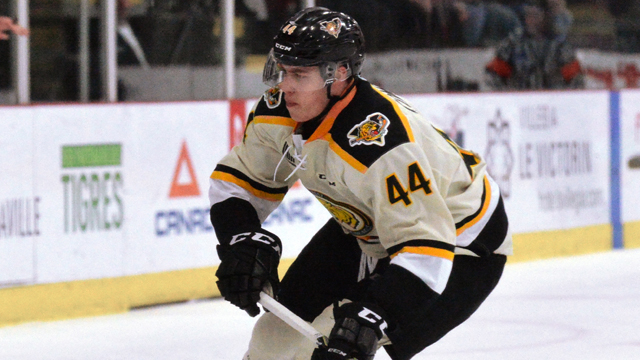 Toronto, ON – The Canadian Hockey League today announced that Anaheim Ducks prospect Maxime Comtois of the Victoriaville Tigres is the CHL Player of the Week for the week ending February 11 after scoring four goals and four assists for eight points in three games with a plus-minus rating of plus-6.

Comtois delivered a trio of multi-point performances for the seventh place Tigres who officially clinched a berth in the QMJHL Playoffs riding a five-game winning-streak which has improved their record to 30-18-4-2.  His week began Wednesday with a goal and an assist in a 7-1 victory over the Val-d’Or Foreurs, and continued Thursday scoring twice with two assists as second star of an 8-4 win against the Baie-Comeau Drakkar.  His week wrapped up outdoors on Saturday competing in the Drummondville Winter Classic scoring his 30th goal of the season and adding an assist to extend his personal point-streak to seven in a 2-0 victory over the Voltigeurs.

A 19-year-old from Longueuil, QC, Comtois is playing in his third season in Victoriaville after being selected by the Tigres third overall in the 2015 QMJHL Entry Draft.  His 54 points in 41 games are just six points shy of his career-high of 60 set during his rookie season across 62 games.  Comtois was a second round pick by the Ducks in the 2017 NHL Draft and won gold as a member of Canada’s National Junior Team at the 2018 IIHF World Junior Championship in Buffalo.

Also considered for the award this week was Anaheim Ducks prospect Tyler Soy who became the Victoria Royals all-time leading goal scorer with 142 during a week in which he recorded four goals and four assists for eight points in three games, and 2018 NHL Draft prospect Liam Foudy of the London Knights who scored five goals and two assists for seven points in three games.