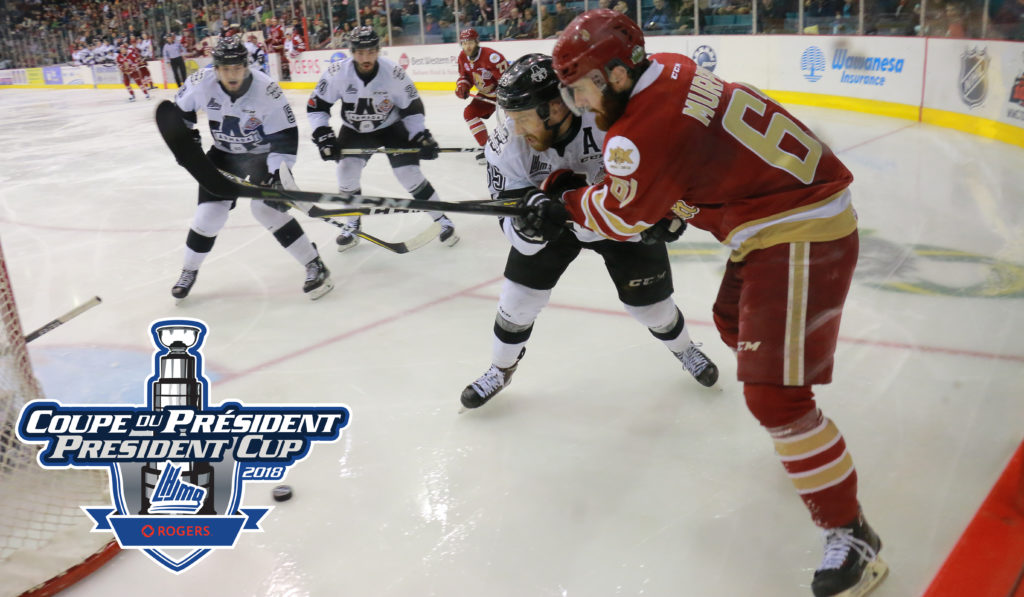 Playing a second game in as many nights, the Blainville-Boisbriand Armada managed to tie up its 2018 Rogers President Cup Final series with the Acadie-Bathurst Titan at 2-2 following a 5-1 win on Wednesday night.

Despite a 25-25 tie in shots on goal, it was the Armada who seemed to control the pace of the game for most of the night, including a three-goal second period that created an uphill battle too steep to climb for the Titan.

Anthony Poulin, Alexander Katerinakis and Luke Henman were respectively responsible for the middle frame goals, while Drake Batherson scored the final two markers for the Armada to take over the post-season scoring race. Joël Teasdale also had two points of his own in the win, both in the form of assists.

In goal, Evan Fitzpatrick made 20 saves in the loss while his Titan teammate, Adam Holwell, was the only one to beat the Armada’s Émile Samson down the other end of the ice.

After both teams tied at six in shots in the scoreless first period, the flood gates opened for the Armada in the second period as it was clearly not intimidated by the sold-out crowd at Bathurst’s K.C. Irving Regional Centre.

Taking a 3-0 lead into the final frame, Batherson added to Blainville-Boisbriand’s lead with his 11th goal of the playoffs 7:24 into the period. Holwell cut the lead to 4-1 with the Titan’s only goal of the game 85 seconds later, but it was too little too late.

Batherson then added an empty net goal with 4:04 left on the game’s clock to seal the game’s outcome.

Both teams will now travel back to Boisbriand’s Centre d’Excellence Sports Rousseau for a promising Game 5 to be played on Friday night at 7 p.m ET / 8 p.m AT.