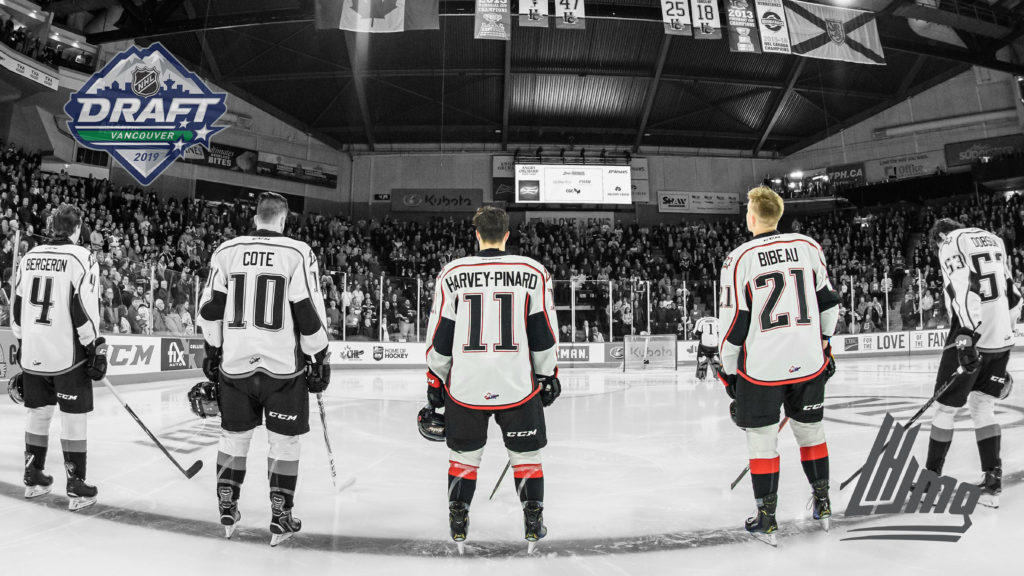 If at first you don’t succeed, try and try again.

It’s a saying that has been around for years and one that is closely tied to the qualities of perseverance and dedication.

For forwards Félix Bibeau and Rafaël Harvey-Pinard – two players who’ve shown drastic improvement since taking their first strides in the QMJHL back in 2015-16 – it has never been about trying harder however, but rather about proving their worth.

Fast-forward to the weekend of June 21 and 22 of 2019 and it is now much clearer; all of their hard work has finally paid off. The culmination of years and years of practices and sacrifices came for Bibeau and Harvey-Pinard, both 20 years old, when they were selected in the 2019 NHL Entry Draft.

Being drafted by and NHL franchise is always a remarkable feat, but it is even more so when it’s done in your third year of eligibility.

“I knew that at 20 years old my chances of getting drafted were pretty slim”, admitted Bibeau. “I didn’t go to Vancouver [where the draft was held] thinking that if ever I was selected, I’d be at home, with my family. I didn’t have any expectations whatsoever so the feeling of getting drafted was hard to beat! It was a surprise and I was thrilled to hear my name!”

The New York Islanders were the ones who called Bibeau’s name, waiting until the 6th round before using the 178th pick on the Mercier, Quebec native.

It was an almost identical scenario for Harvey-Pinard, Bibeau’s teammate with the Rouyn-Noranda Huskies for the past four seasons.

“I knew I had some chances of getting drafted, but I also knew they were minimal”, he said. “Usually it’s the 17- and 18-year-old guys who get picked, so to get drafted at 20 is pretty special! It was a really nice surprise for my family and I.”

Having your name called by any one of the 31 NHL franchises is nothing short of exceptional, but it was more than a dream come true for Harvey-Pinard. The Jonquière, Quebec native was selected 23 spots after Bibeau by none other than the team he had been cheering for his entire life: the Montreal Canadiens. 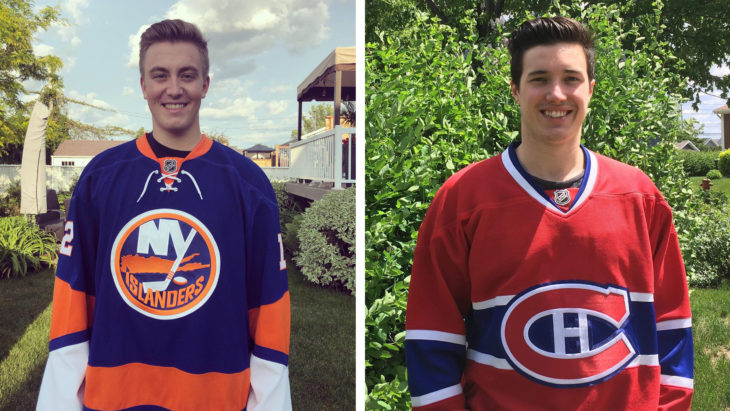 The cherry on top

Needless to say, the NHL Draft made up a memorable afternoon for both young men. Last September, none of them could’ve expected the journey they were about to embark on. Back then, Bibeau and Harvey-Pinard, respectively an assistant captain and the team captain of the Huskies this past season, were still dreaming of the best-case scenarios for the 2018-19 campaign.

Ten months later, they could never have imagined that all their wildest dreams were now a reality.

Both star players led Rouyn-Noranda to a record-setting season in which the Huskies matched a CHL record 25 straight wins and finished atop the regular season standings with a QMJHL record 59 victories. All this on the verge of leading the Huskies to a President Cup title, and eventually to a Memorial Cup win.

Before becoming an Islanders pick, Bibeau enjoyed a fantastic 2018-19 season that saw him post a career best 69 points in 63 games. He followed that up with a stellar showing in the playoffs, tallying another 29 points in 20 outings, before capping off the Memorial Cup with a tournament-best five goals in as many games.

For Harvey-Pinard, it was a little bit of the same. He also set new career highs by finding the back of the net 40 times and picking up 85 points in 66 regular season games. He’d go on to add another 13 goals and 27 points in his 20 postseason outings before amassing six points in five games at the Memorial Cup.

Both men agree: having all of their team success helped them garner the attention of NHL scouts that they hadn’t been able to convince in the previous two seasons.

“Having such a good team this year helped me get drafted because we had a lot of visibility. Playing in the league final and at the Memorial Cup meant that many eyes were on us”, stated Bibeau. “In my case, it also helped that I was playing with Noah Dobson in Rouyn-Noranda. The Islanders’ player development personnel followed Noah all season, so they got to see me play more often as well.”

“For me, I think my skating is what scared off a few scouts in the past”, Harvey-Pinard hinted. “But I’ve been working on it for years now, and the fact that we went deep in the playoffs and then at the Memorial Cup allowed me to show the scouts that I had improved. It was beneficial for me, no question about it.” 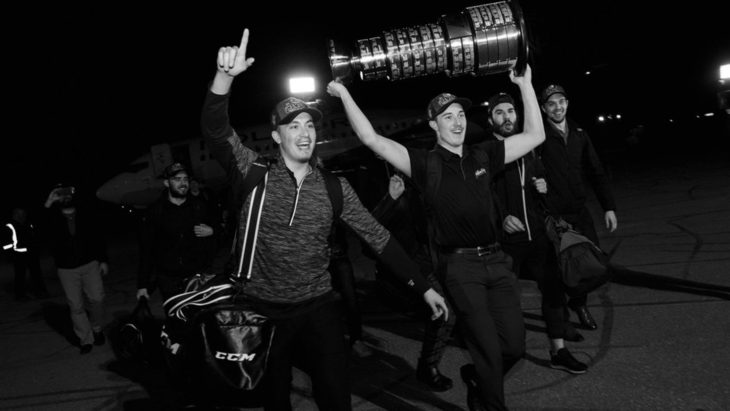 With the Huskies tremendous season now engraved in the league’s history books, Rouyn-Noranda decided it was best to start its rebuilding process right away. In order to do so, the franchise had to trade its veterans to get its youth movement under way.

Prior to the latest QMJHL Draft, the Abitibi squad announced it was trading Bibeau to the Quebec Remparts and sending Harvey-Pinard to the Chicoutimi Saguenéens. While both players were saddened to leave the championship team that drafted them back in 2015, they were also excited for things to come.

For Harvey-Pinard, all stars seem to be aligned. After capping off his season with two championship rings, he now has a chance at representing both teams he grew up watching in the Saguenéens and Canadiens!

“After the Memorial Cup, I kept saying that I had just wrapped up the perfect season. But now it truly is perfect!”, he laughed. “Winning two cups, getting drafted by the Habs, and then getting traded to my childhood team and being named its captain, I couldn’t have asked for anything better over the past three months. I went through so many emotions and I’m thankful for them all!”

Growing up, Harvey-Pinard remembers that his parents would only allow him to break curfew if he was watching a Habs game. After all those nights spent watching hockey with the family, his selection by the Canadiens was evidently a really emotional one.

“I was sitting in the living room with my sister and my parents on Draft day”, he ironically recalls. “My agent sent me a quick text to tell me I was going to get picked really soon. When I looked up at the TV, I saw that the Habs were up. It was crazy! When we saw my name show up on the screen, my sister started crying, then it was my parents, so then I started crying too!”

For Bibeau, getting to this point in his career is more about faith and that’s what is motivating him for what’s coming.

“Ever since I began playing in the Q, it was never easy for me. But I kept working hard and believing in myself”, he proudly states. “I know 2019 will be hard to beat, so many great things happened to me. I feel like [being drafted] is just me being rewarded for all my efforts over all these years!”

With the pressure of being selected in the NHL now behind them, both players can now look at the future. At age 20, Bibeau and Harvey-Pinard now have two options heading into next season; playing a final season in the Q, or playing a first season of professional hockey. 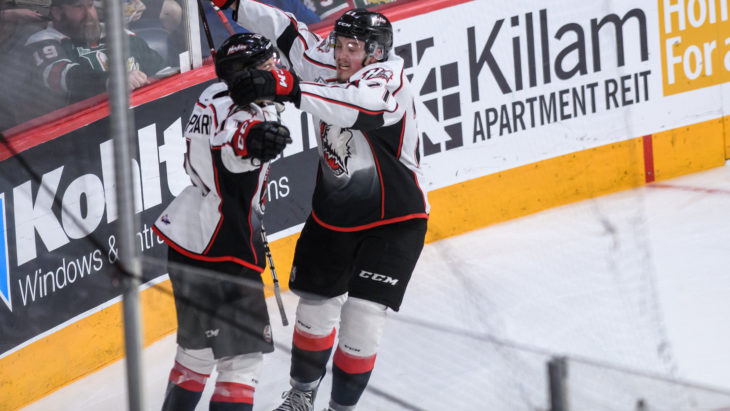 Every hockey player’s dream is to suit up in the NHL one day. For Bibeau and Harvey-Pinard, that dream is closer than ever, yet still very far.

For the first time in their lives, both will now be working out in the off-season in the hopes of showing their NHL squads that they made the right choice in selecting them last month.

“My main objective is to have a good summer of training. I haven’t fixed goals for myself yet, but if I get a chance to play in the AHL next season, I will take it”, mentioned Bibeau. “I’ve always wanted to play at the highest level possible, so we can say that playing in the AHL is now part of my objectives. But I wouldn’t be sad of having to return to the Q with the Remparts. I have no real expectations, so if it’s one or the other I’ll be happy and I’ll be playing hockey! What more can you ask for?”

For Harvey-Pinard it’s a little bit of the same in terms of his personal goals.

“My objective is definitely to play for the Laval Rocket next year and I’m going to give my all during my summer workouts to make it happen”, he says. However, should the veteran head back to junior, he is going to enjoy every minute he spends playing for the other team he grew up idolizing.

“In the end, if the Canadiens decide it’s better for me to head back to junior, I won’t be too rattled since I’ll be playing for the Saguenéens – my home team. We’re going to have a great squad so no matter what scenario happens, I’m going to have a good time next year!”