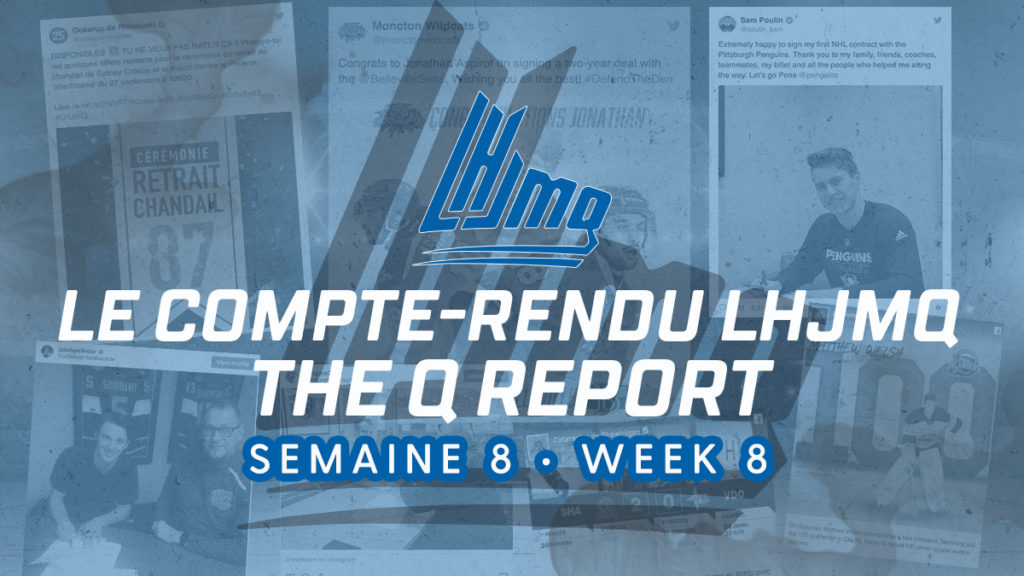 Although the schedule is lighter in the league this week, there’s no shortage of stories to share during the first full week of November in the QMJHL.

The Dean of the West

The World Under-17 Hockey Challenge continues this week in Swift Current, Saskatchewan and Red Deer, Alberta and already, representatives from the QMJHL are making headlines.

Arguably the biggest impact from a QMJHL player in the event thus far has come from the stick of Gatineau Olympiques center Zachary Dean, who scored the overtime winner for Team Canada Black in their tournament opening 6-5 win over Team Canada White. He would go on to chip in an assist on another overtime tally, this one coming during a 5-4 triumph over Team USA on Tuesday. The tournament concludes with Saturday’s Gold Medal Game, set to take place at 9PM ET/10PM AT.

Dean had four points — two goals and two assists — in the three preliminary games with undefeated Canada Black. The team takes on Russia in a Thursday quarter-finals.https://t.co/32VFbA8ry9

From Baie-Comeau to Manitoba

While the best Under-17 male players in the world battle it out, the top Under-18 females in Canada are facing off against one another in Winkler and Morden, Manitoba. Participating in this tournament is yet another familiar name within QMJHL hockey circles as Baie-Comeau Drakkar Athletic Therapist Mariane Allard is assuming the same duties for Team Quebec. Her squad is currently tied for second in Group B, trailing only Team Ontario Blue.

It’s been the best of times for Rimouski Oceanic center Cedric Pare. This campaign has been a coming out party for the 20-year-old so far. On Halloween night, the former Saint John Sea Dog visited his former home arena and, in lieu of trick-or-treating, decided to treat himself… to a trick! Pare’s second six-point game of the season – and third hat trick – was instrumental in propelling the Oceanic to a 6-1 triumph.

While Pare was pulling ahead in the scoring race, Dakota Lund-Cornish was stopping everything in sight. The Baie-Comeau Drakkar netminder registered his second career QMJHL shutout last Friday night, turning aside 25 shots in a 5-0 victory over the Victoriaville Tigres.

The Chicoutimi Sagueneens will ring in the new year by celebrating one of their franchise’s top players when Jean-Marc Richard’s #6 will be sent to the rafters at the Georges Vezina Center on January 3rd. Richard patrolled the blueline in Chicoutimi from 1983-87, recording 301 points in 268 regular season games. One of just two defensemen to record back-to-back 100-point campaigns, Richard also helped lead the Sags to a President Cup Final appearance in 1987.

Helping Out by Working Out

When Cédric Finn passed away from sarcoma cancer two years ago, his brother Samuel – a former QMJHL player who played for Cape Breton, Lewiston and Victoriaville – immediately began looking for ways to fund research for the rare form of cancer. That’s when he came up with the “Burpees for Ced” initiative.

The premise of the campaign is straightforward; try to set a Guinness World Record for the most chest-to-ground burpees completed in a 12-hour period. All donations obtained will support the Cedars Cancer Foundation – Cedric Finn Fund. While it remains to be seen whether or not the goal of 5000 burpees will be achieved when the event occurs on November 29th, the monetary target of $30,000 is well on its way to being met.

QMJHL teams have already joined the #Burpees4Ced movement, with the Rimouski and Blainville-Boisbriand organizations leading the way with 500$ donations each… and a few burpees as well!