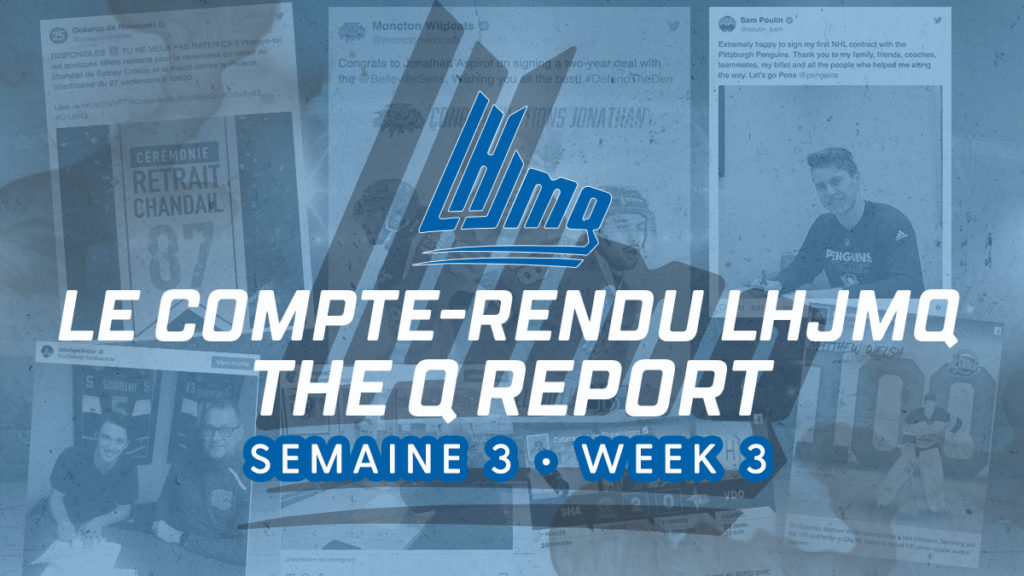 Be it individual, team or league accomplishments, the second week of action in the QMJHL featured something for everyone.

When Sidney Crosby was celebrated with the retirement of his Number 87 by the Rimouski Oceanic last Friday night, everyone expected a memorable celebration of the career of the former first overall selection in both the QMJHL (2003) and NHL (2005) Drafts.

What wasn’t expected was what the QMJHL itself had up it’s sleeve. During the pre-game festivities at the Sun Life Financial Coliseum, it was announced by the “Q” that uniform number 87 would be retired league-wide, a first in CHL history.

BREAKING | As of next year, no one will wear Crosby’s number 87 in the #QMJHL. It will be retired across the league!

After all the pomp and circumstance, the Oceanic and Sherbrooke Phoenix went to battle. The game would be decided by yet another QMJHL first overall selection. Alexis Lafreniere, drafted by Rimouski in 2017 and slotted for the upper echelons of the 2020 NHL Draft, showed impeccable timing – in more ways than one – in potting his first goal of the season with 22 seconds remaining in overtime to deliver a victory to the Oceanic.

A Comeback for the Ages

For the first time, fans in Sydney witnessed their newly reconstituted Cape Breton Eagles take the ice in regular season action on Saturday night. Those in attendance won’t soon forget what they saw, and not just because of the new name and uniforms.

Trailing the Saint John Sea Dogs 5-0 in the game’s first half, the Eagles began to claw away. Three tallies in each of the second and third periods, including Shawn Boudrias’ winner with a minute and a half left in the final stanza, would pave the way for the Eagles’ improbable 6-5 triumph.

Your Eagles WIN!!! It was a remarkable comeback at the Nest, as the Eagles rally from 5-0 to defeat the Saint John Sea Dogs 6-5!! Jarrett Baker and Derek Gentile each had a goal and an assist, Egor Sokolov had three assists, and Shawn Boudrias scored the winning goal with 90 seconds left to complete the comeback. The same two teams will do battle tomorrow afternoon at Centre 200. Puck drop is at 4 PM, and tickets can be purchased at the Centre 200 box office, by phone at 902-564-2200 or online at https://tickets.capebreton.ca/Online/default.asp

Shawinigan Cataractes goaltender Antoine Coulombe made an impression in his first start of the 2019-20 season by pitching his first career QMJHL shutout. He only had to wait five days to turn the trick again.

The second-year netminder blocked all 30 shots fired on net by the visiting Victoriaville Tigres as the Cataractes posted a 5-0 victory in their home opener on Friday night. He would eventually extend that sequence to 191:01, bringing to a close the longest shutout streak to start a season in QMJHL history.

Antoine Coulombe of the @Cataractes_Shaw is the latest #UltramarPlayer of the Week! The netminder set a #QMJHL record by kicking off a season with a 191:01 shutout streak!

Coulombe was one of two goalies to notch a shutout last week. On Sunday afternoon, Sherbrooke Phoenix netminder Thomas Sigouin posted the second QMJHL whitewash of his career with a 30-save effort in his club’s 1-0 overtime win against the Drakkar in Baie-Comeau.

The final home opener in the QMJHL this season takes place in Chicoutimi, tonight, when the Sagueneens host the Halifax Mooseheads. It should prove to be a memorable night, in particular for Sags’ captain Rafael Harvey-Pinard.

A post shared by Saguenéens de Chicoutimi (@sagueneensdechicoutimi) on Jun 7, 2019 at 10:01am PDT

After leading the Rouyn-Noranda Huskies to President and Memorial Cup victories last spring, the Jonquiere, Quebec native made his way home to the Saguenay region thanks to an off-season trade. Expected to be a force all season long, the Sagueneens make their debut at Georges Vezina Centre undefeated in regulation (3-0-1).