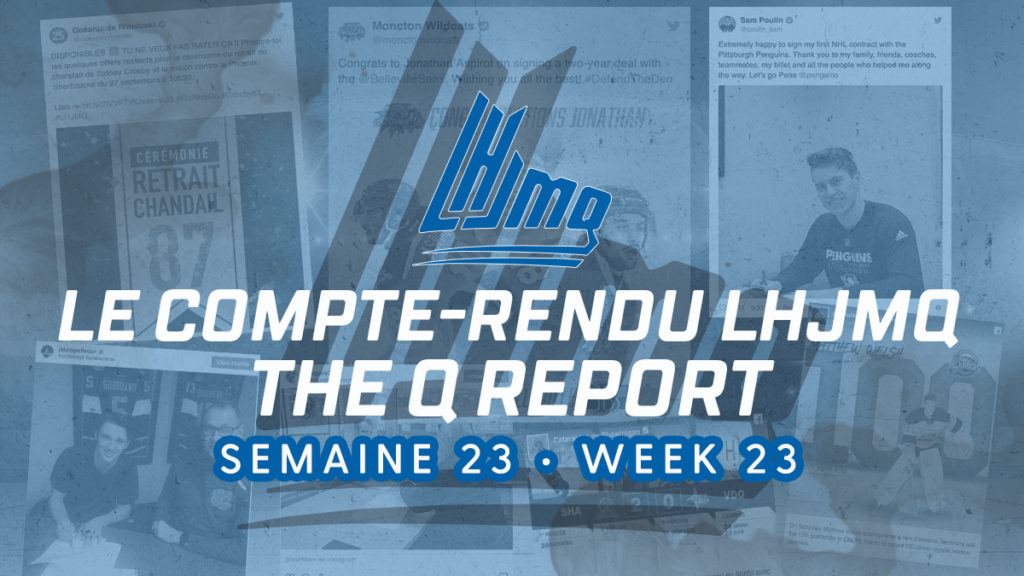 Unbeatable teams, milestones and tributes have captured the attention of teams and fans in the QMJHL this past week.

The Moncton Wildcats have been unstoppable. Completing a tricky road trip Sunday afternoon in Rimouski, the Cats reeled off their 15th straight victory and 21st consecutive game with at least a point – both franchise records – in a 3-1 triumph over the Oceanic. The Wildcats have now extended that run to 16 and 22 straight, respectively, thanks to a 3-2 win in Bathurst last night.

A record-setting @crowneplazamonctondowntown Road Trip Recap! Our 5-game long perfect road stretch took us to 14 consecutive wins (the old record) and beyond! We go for wins #17 & #18 on home ice Saturday night & Sunday afternoon. Come out and watch this team roll! #DefendTheDen

In a story recently featured nationwide on Sportsnet, the Oceanic’s visit to the Rimouski Regional Hospital was highlighted by the network and praised by the General Director of the hospital’s Foundation, Stephanie Boulianne. This is just one of countless initiatives all QMJHL clubs partake in, year in and year out, in their communities.

Last Friday, during the Charlottetown Islanders Players Night – an evening that featured everything from retro jerseys, nicknames on the name bars and plenty of opportunities for the crowd to salute their hometown heroes – the night ended up belonging to one player in particular.

During the third period of the Isles’ 6-2 win over Cape Breton, Matthew Welsh surpassed the all-time QMJHL record for career minutes played by a netminder, a position formerly held by Ryan Mior, who also spent much of his five-season career with the PEI organization.

"He's done so much on and off the ice for this community, it was a terrific celebration tonight and it was fitting." – Jim Hulton

More from the Eastlink Centre on a historic, memorable night for Matthew Welsh.

One year ago this week, a tragedy rocked the hockey world with the passing of former Voltigeurs and Armada forward, Alec Reid. At the age of 18, Reid lost his life due to complications related to epilepsy. In the wake of this untimely event, the Alliance Sports-Etudes, of which Reid was a member, elected to keep his memory alive by naming its “Most Dedicated Student-Athlete Award” in honor of the fallen player.

Taken one year ago. Gone too soon.

It’s been a long road in the game for Justin St-Pierre. The former QMJHL official donned the stripes in the league over parts of four seasons (1993-97). This would quickly lead to an opening in the pro ranks and eventually a call to the NHL in 2005. Last week, the 48-year-old from Dolbeau, Quebec celebrated his 1000th game in the world’s top league for a matchup between Rangers and Canadiens at the Bell Centre.

Congratulations to referee Justin St-Pierre for his 1,000th game in the NHL.#GoHabsGo pic.twitter.com/VzAuRnzLTG

When his billet father was recently diagnosed with esophageal cancer, Halifax netminder Alexis Gravel immediately sprang to action in order to gather funds to help his billet dad fight the disease. Through a GoFundMe page, Gravel is very close to approaching his goal of raising $5,000, which includes donations from several current and former Mooseheads teammates. In addition, Gravel has been donating $15 for every game his team wins. To top it off, for every $5 donated by the public, Gravel will enter their name in a contest that will see the winner walk away with a goalie stick signed by the entire Moose squad.

Hi everyone! I'm starting this fundraiser as recently, I found out my billet dad, Phil, was diagnosed with esophageal cancer. Phil is such a generous man, and has grown to become a big part of my life, so i figured this is the LEAST I could do for him. For every game my team, the Halifax Mooseheads win, I will be donating $15. For every $5 donated, you will be entered in a chance to win one of my hockey sticks, signed by the whole team. Thank you all so much for your help, and keep Phil in your prayers! Link in bio

Over the past four years, PEI’s Jeremy McKenna has earned the moniker “The Summerside Sniper” thanks to his high scoring antics with the Wildcats. That trend continued last Friday night in Baie-Comeau as the overage forward cashed in his fifth career QMJHL hat trick in an 8-1 triumph over the Drakkar. His was one of two three-goal performances on the week, the other coming off the stick of the Quebec Remparts’ Pierrick Dube in their 5-2 win, also over the Drakkar, on Sunday.

14 WINS IN A ROW! Jeremy McKenna's hat trick set the tone for an 8-1 rout of the Drakkar tonight. The Cats defense contributed 9 points — S. Stewart, Andersson & DeJong had 2 points (1G, 1A) each. Former captain Gabe Fortier was named 1st Star in his return to Baie-Comeau. pic.twitter.com/IX1iEHgOPX