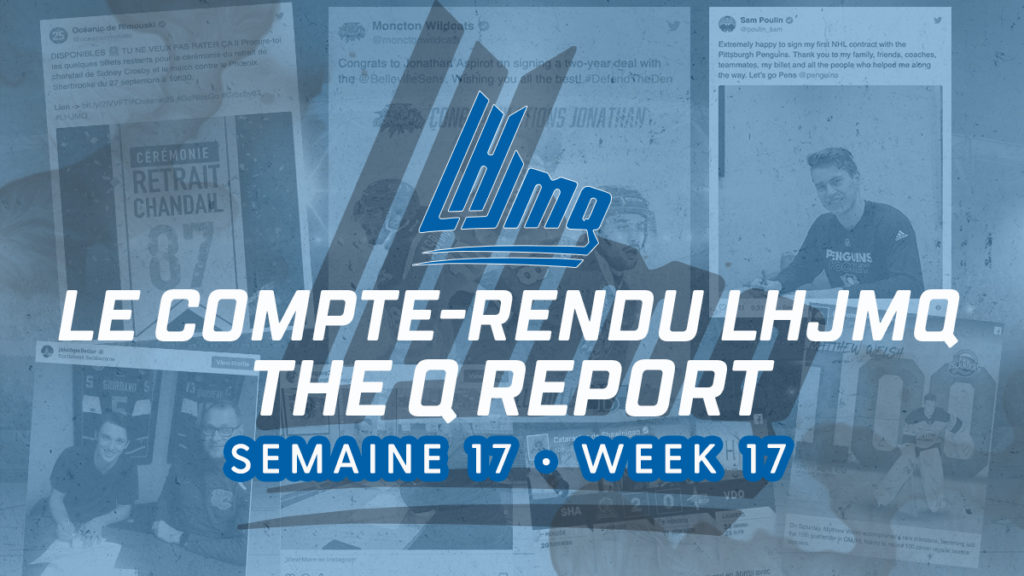 All-Stars, Old Timers, teams and players heating up at the right time… if you’re looking for some of the best stories in the game, the Q Report has you covered!

The game’s attention will be focused this weekend on St. Louis and the 2020 NHL All-Star Game. Six QMJHL alumni have been named to the four rosters competing in the event, including two that have earned the captaincy for their respective squads. Pittsburgh defenseman Kris Letang will don the “C” for the Metropolitan Division. Joining him on that roster is New Jersey forward Nico Hischier. The Central Division will be captained by Colorado forward Nathan MacKinnon. He’ll hit the ice alongside St. Louis forward David Perron. The Atlantic Division features a pair of former “Q” stars in Ottawa forward Anthony Duclair and Florida forward Jonathan Huberdeau.

The Gatineau Olympiques have qualified for the playoffs every year since 1985. At this time one month ago, that record appeared to be in severe jeopardy as the squad faced a double-digit deficit in the race for the final postseason berth. The Olympiques have had other ideas lately, however. Despite still being on the outside of the playoff picture entering this weekend, the gap has almost entirely closed for the “O’s”, thanks in large part to earning points in ten of the last twelve games entering action on Friday.

A Life Saving Race in the Maritimes

As part of Canadian Blood Services’ ongoing Hockey Gives Blood initiative, the Wildcats, Sea Dogs and Islanders franchises have challenged one another in what has been deemed the “Community Rivalry” blood drive. The club that obtains the highest percentage of their target will claim victory. Entering this week, the Wildcats hold the lead, with over 50% of their target of 976 donors having given the gift of life already.

The Sherbrooke Phoenix and Chicoutimi Sagueneens have been battling at the top of the QMJHL standings all season long. On Saturday afternoon in Sherbrooke, some of the top players to previously suit up in those two cities will also take to the ice in an Old Timer’s affair that is sure to conjure up countless memories. The Sags will feature alumni such as Marc Denis, Pierre-Marc Bouchard and current Chicoutimi Head Coach Yanick Jean, while Sherbrooke will be represented by Serge Boisvert, current Phoenix President Jocelyn Thibeault and Julien Bahl among others.

Following back-to-back President and Memorial Cup Championships with Acadie-Bathurst and Rouyn-Noranda respectively, Huskies bench boss Mario Pouliot knows a thing or two about accolades. The latest notoriety for Pouliot occurred when he stepped behind the bench for his 500th career regular season game as Head Coach. He had reason to celebrate afterwards, as his Huskies downed the high-flying Oceanic by a score of 2-0.

The Kid is Alright

While the residents of Zachary Dean’s home province of Newfoundland continue to dig out from a record snowfall, Dean himself has gotten into the habit of forcing goaltenders to dig the puck out from their nets. The 17-year-old rookie collected his first career hat trick last Sunday in a crucial home ice win by the Olympiques over the Mooseheads.

There was one shutout in the “Q” last week. On Saturday night, Rimouski’s Creed Jones made it two whitewashes in four starts for the Oceanic as he stopped 20 shots in his new club’s 5-0 victory over Acadie-Bathurst.