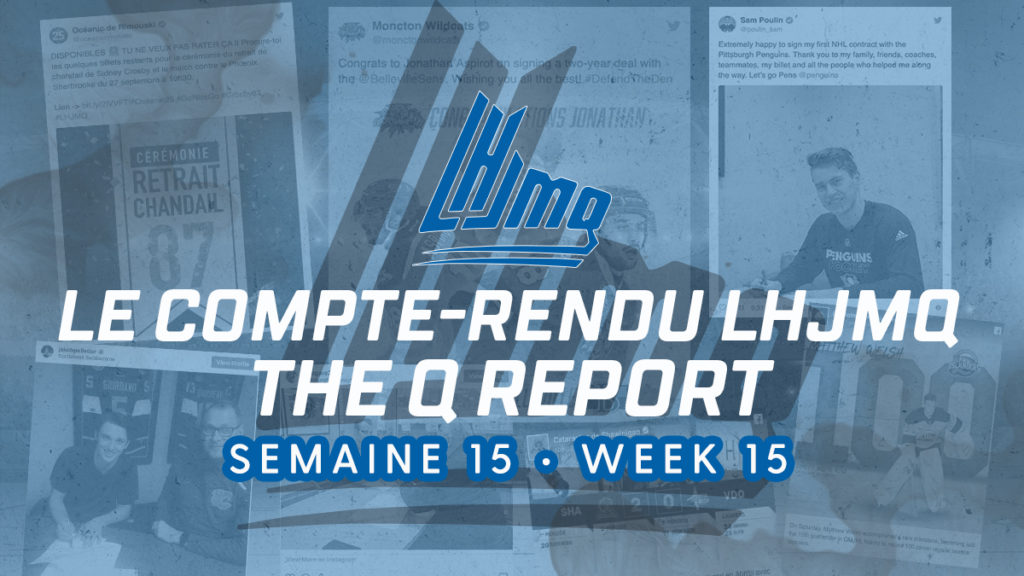 Golden moments, changes of address and NHL prospects are just a few of the storylines surrounding the QMJHL as the regular season stretch drive commences.

On Top of the World

A total of 17 current or former QMJHL players represented six different nations at the latest World Juniors tournament held in Ostrava and Trinec, Czech Republic. The 2020 edition will best be remembered by its gold medal game, an instant classic that saw Canada erase a third period deficit to top Russia. Nine current or former QMJHLers participated in the final contest, including tournament MVP Alexis Lafreniere.

The league’s annual trade period wrapped up on Monday and among the most active buyers were the Moncton Wildcats, who fortified their roster by acquiring Gabriel Fortier (Baie-Comeau), Benoit-Olivier Groulx and Jared McIsaac (Halifax). Their Maritime rivals, the Cape Breton Eagles, welcomed aboard Xavier Bouchard (Baie-Comeau), Shawn Element (Acadie-Bathurst) and Tyler Hinam (Rouyn-Noranda).

Meanwhile, over in Sherbrooke, the league-leading Phoenix hopes to keep that pace thanks to the arrivals of Samuel Bolduc (Blainville-Boisbriand), Xavier Bernard (Charlottetown) and Charles-Antoine Roy (Gatineau).

While the five teams noted above continue to flex their muscles upon the rest of the league more often than not, another pair of clubs have reminded the “Q” that, still, anyone can beat anyone on any given night.

In the Western Conference, the Blainville-Boisbriand Armada, despite parting ways with top defenseman Samuel Bolduc, have won seven straight games. They hold down top spot in the West Division thanks in part to impactful performances from winger Yaroslav Likhachev and goaltender Emile Samson, both of whom respectively earned Player of the Month and Player of the Week honors recently.

In the Eastern Conference, the Saint John Sea Dogs have leapt ahead in the standings despite also bidding farewell to a star player in forward Nicolas Guay. The Dogs have already accumulated 41 points, nine more than their entire 2018-19 total, while winning 12 of their last 17 contests. Getting the job done is a quartet of 17-year-olds who currently hold down the top four positions in team scoring; wingers Brady Burns and Josh Lawrence and defensemen Jeremie Poirier and William Villeneuve.

The recent announcement of the rosters for 2020 Kubota CHL/NHL Top Prospects Game features the typical strong contingent of talent from the “Q”. Team White will be captained by Alexis Lafreniere, who will be joined by fellow forwards Ryan Francis (Cape Breton), Mavrik Bourque and Vasily Ponomarev (Shawinigan), as well as goaltender Samuel Hlavaj (Sherbrooke).

Team Red will feature Dawson Mercer (Chicoutimi) as one of its assistant-captains, as well as a trio of QMJHL blueliners in Lukas Cormier (Charlottetown), Thimo Nickl (Drummondville) and Jeremie Poirier (Saint John).

A few QMJHL milestones have been highlighting league news recently. Wildcats winger Jakob Pelletier recorded his 200th career regular season point on December 28th versus Charlottetown in what was his 152nd game. Veteran Olympiques winger Carson MacKinnon suited up for his 300th regular season game in the “Q” in Shawinigan on January 3rd. Meanwhile, the Cataractes travelled to Rimouski on January 7th in what was the 3500th game played in the history of the league’s oldest franchise.

Jakob Pelletier hits 200 points in the @QMJHL tonight, all in a Wildcats uniform! Congrats Pelts! pic.twitter.com/Y5qeADES82

Blainville-Boisbriand’s Yaroslav Likhachev ended 2019 with a bang, knocking home a hat trick in a victory over Rouyn-Noranda. His was one of four three-goal outings in the “Q” last week, the others coming off the sticks of Jeffrey Durocher (Saint John), Simon Pinard (Blainville-Boisbriand) and Benjamin Tardif (Sherbrooke).

While these guys were filling the net, Cape Breton’s Kevin Mandolese was keeping pucks out. He became the first goaltender this season to record two shutouts in one week, making 32 and 31 saves in victories over Charlottetown and Moncton, respectively.

Other whitewashes following the Christmas break came courtesy of Dakota Lund-Cornish (Moncton), Fabio Iacobo (Victoriaville) and Jacob Leblanc (Drummondville). For Iacobo and Leblanc, these were their first career QMJHL shutouts.