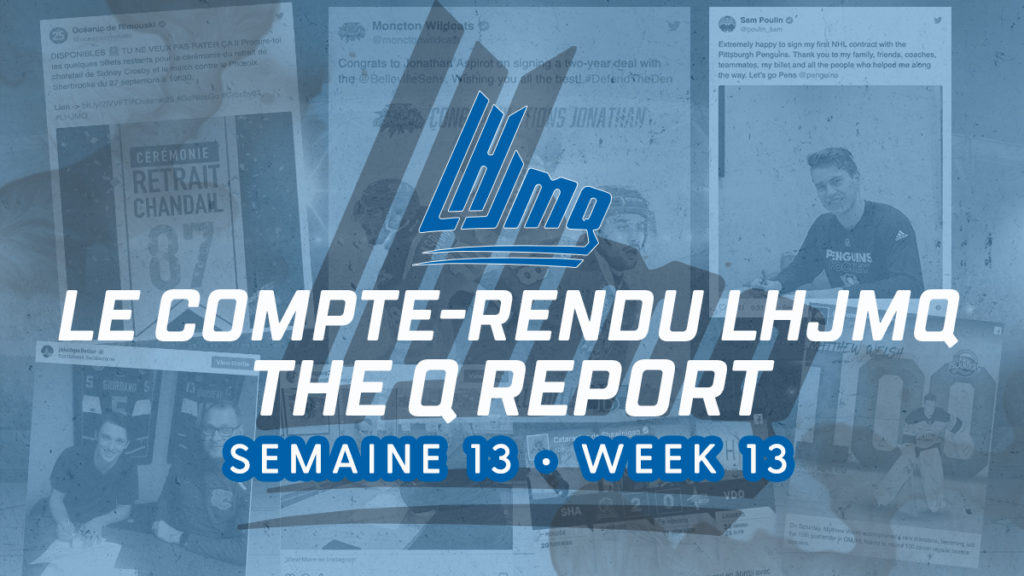 A prelude to the trade period, big news behind the bench in Drummondville and future educational commitments. As the holidays approach, new storylines continue to emerge in the QMJHL.

Up to the Challenge

One of the biggest showcases of young hockey prospects in Eastern Canada is taking place in La Baie, Quebec from December 12-15 with the CCM Midget AAA Challenge. In addition to the players themselves, the coaching staffs of the QMJHL Midget Espoir and School All-Star Teams also contain close ties to the league with former “Q” players Eric L’Italien, Claude Boivin, Marc Bureau, Joel Perrault and Maxime Ouellet finding themselves behind the bench this weekend.

With the season’s final trade period just around the corner, we have already received a small taste of what’s to come in the days ahead with a deal made yesterday between Quebec and Chicoutimi involving 20-year-old center Felix Bibeau. Bibeau now reunites with former Huskies teammate and current Sags captain Rafael Harvey-Pinard, with whom he won the President Cup and Memorial Cup last season.

A post shared by Saguenéens de Chicoutimi (@sagueneensdechicoutimi) on Dec 11, 2019 at 11:45am PST

The Voltigeurs have turned heads throughout the league this year so it was no surprise when it was confirmed earlier this week that the club’s GM, Philippe Boucher, announced a two-year contract extension for Head Coach Steve Hartley. Option years were also exercised for his assistants Mathieu Turcotte and Alexandre Guerard.

A slew of post-secondary commitments has been announced in recent days in both the QMJHL and USports ranks. In Sherbrooke, a trio of Phoenix players will continue flying high in blue and white in 2020-21 with forwards Felix Robert and Alex-Olivier Voyer, along with defenseman Yann-Felix Lapointe, committing to the University of Moncton Aigles Bleus next fall.

It was also announced earlier this week that overage defenseman Vincent Martineau, who was dealt from Rimouski to Gatineau on Wednesday, will be on the move once more next September with his commitment to Concordia University.

A Celebration in Blue and Red

When the Remparts host the Drakkar on January 24th, they’ll be paying homage to a crucial piece of Quebec’s hockey history as the organization celebrates the 40th anniversary of the NHL’s arrival in the city during Nordiques Night. The Remparts will sport special blue and red sweaters reminiscent of the ones the previous incarnation of the junior club wore from 1983-85. Former Nordiques and Remparts defenseman Alain Cote will be among the guests of honor.

Offensive fireworks have been one of the top stories of the season in the “Q” this year. However, we haven’t seen a period quite like this. The previous week saw no less than seven hat tricks scored, including, for the first time this season, three goal outings from players in the same game!

Congrats to @pipesmac12, notching the 🎩🎩🎩 in tonight’s win over Victo! pic.twitter.com/BSQk4UQ9Ox