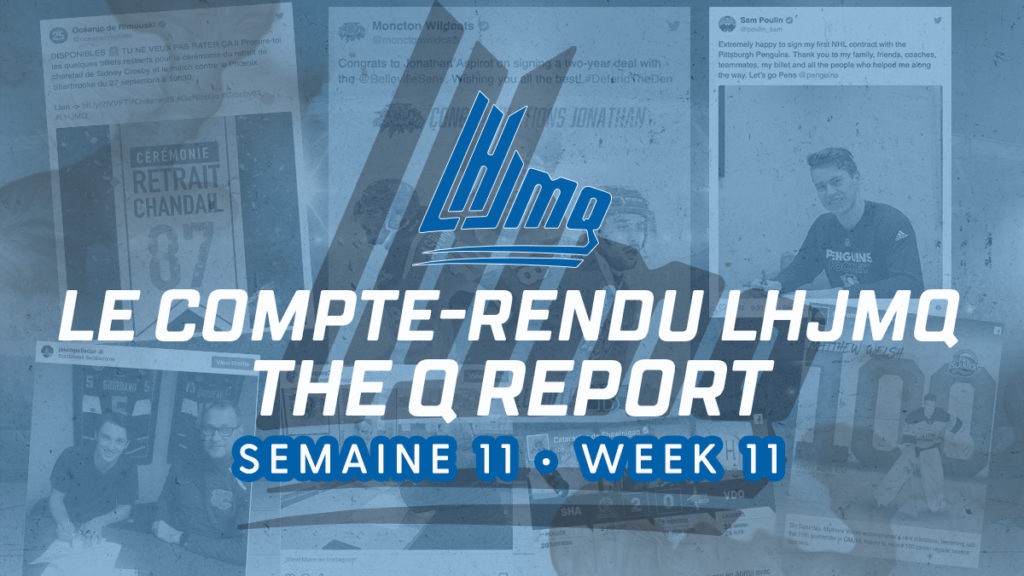 Professional recognition, a worthy cause in Shawinigan and goalies slamming the door shut highlight some of the stories in the league this week.

A Call to the Hall

On Tuesday night, the Montreal Canadiens took to social media to congratulate Stephane Robidas, one of their alumni, on his election to the QMJHL Hall of Fame.

After four seasons with the Shawinigan Cataractes, Robidas turned pro with the Canadiens, the team that selected him in the seventh round of the 1995 NHL Entry Draft. After three seasons in the AHL, he cracked the Habs lineup full time in 2000. It was the start of an NHL career that would span 937 regular season games over 15 seasons.

Robidas joins Roberto Luongo, Simon Gamache and Rick Vaive as inductees into the QMJHL Hall of Fame in the player category, while long time coach Clement Jodoin earns the same honor in the builder category.

A new member of the QMJHL Hall of Fame is at the Bell Centre tonight.

This March, the Shawinigan Cataractes will be joining forces with a key community initiative to offer advanced medical assistance to the area.

On March 19th of 2020, the club with join forces with La Fondation de la SSS de l’Energie – a group that continues on its mission to invest in new and innovative projects within the health and medical sectors in the region. More than 300 guests are expected to attend the fundraising event, which will see proceeds distributed to both the above noted foundation as well as the Shawinigan Cataractes Study Fund.

The last time Rafael Harvey-Pinard shared the ice with the Rouyn-Noranda Huskies, he was wearing the “C” for that squad. He was also hoisting the Memorial Cup. Fast forward six months and Harvey-Pinard will once again meet up with his Rouyn-Noranda contemporaries. Only difference is, he’s now doing so as captain of the Chicoutimi Sagueneens.

The Jonquiere native was dealt to his hometown team at the QMJHL Draft and is set for what he hopes will be another extended playoff run to cap his “Q” career. The Huskies and Sags will face off in back-to-back matches in Chicoutimi on Saturday and Sunday afternoon.

A post shared by Saguenéens de Chicoutimi (@sagueneensdechicoutimi) on Jun 7, 2019 at 10:01am PDT

It’s been a trying year for the Victoriaville Tigres up to this point but one of their brighter spots has come from a rather unlikely source: goaltender Nikolas Hurtubise. With two career QMJHL starts to his name entering last week’s action, he was pressed into duty. His response? A 2-0 record, one goal allowed in two starts, his first career QMJHL shutout and Ultramar Player of the Week honors. Talk about coming in hot!

Hurtubise wasn’t the only netminder to record a shutout last week as he was one of four goaltenders to blank their opposition. It was the first time this season that we’ve seen more shutouts than hat tricks in any given week!

Joining Hurtubise and his 30-save performance in a 2-0 win over Quebec on Saturday was Olivier Rodrigue, who steered aside all 32 shots he faced in Moncton’s 4-0 triumph over the Sagueneens on Thursday.

On Friday, Drummonville goaltender Anthony Morrone picked up his fifth career shutout by stopping 31 drives in a 2-0 win over the powerful Phoenix squad. Sherbrooke’s Samuel Hlavaj would turn the tables on Saturday, making 23 saves of his own in a 3-0 win for the Phoenix over Charlottetown.

The week wasn’t without its share of goals, however. Cataractes winger Jeremy Martin would triple his offensive totals for the year by racking up four goals in a 7-1 win over the Remparts last Friday. As for Val-d’Or’s Peyton Hoyt, he would snipe his second career QMJHL hat trick in a 5-4 win over Gatineau on Saturday.