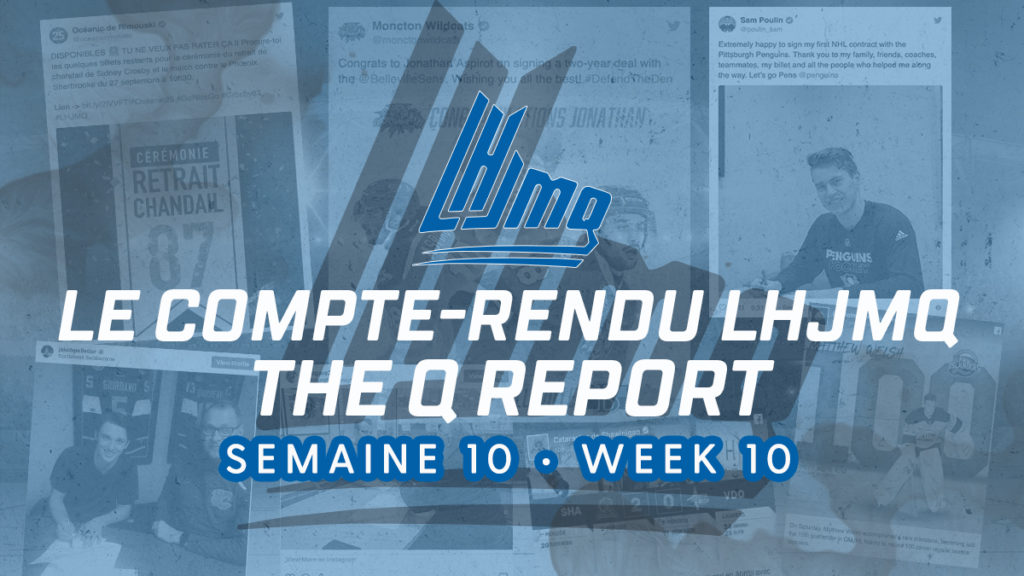 Remembering a legacy in Saint John, an alumnus reaches the show and a banner night in Gatineau. It’s all part of this week’s edition of The Q Report.

In Memory of a Top Dog

Last March, the Saint John Sea Dogs and the hockey world at large were saddened by the death of long time Head Equipment Manager David “DK” Kelly. Though he no longer walks among us, DK’s legacy will be felt for years to come. The Sea Dogs organization are doing what they can to ensure this.

On Friday night, as the Dogs host Chicoutimi, fans will be able to attend the contest by purchasing $10 fundraising vouchers as part of the first annual “DK Night”. Not only will these vouchers get fans into the building, the proceeds will go towards the David “DK” Memorial Bursary Fund, an initiative that will benefit graduating students at nearby St. Malachy’s Memorial High School who are pursuing post-secondary studies in a medical-related field.

On Monday night, the Hockey Hall of Fame welcomed yet another proud former member of the “Q” to its fold when Guy Carbonneau was formally inducted. Before embarking on an 18-year NHL career that saw him amass three Stanley Cups and as many Frank J. Selke Awards, “Carbo” was a superstar for the Sagueneens. In four seasons, Carbonneau racked up 435 point in 273 regular season games. He becomes the 14th QMJHL alumnus to enter the Hall of Fame in the player category.

The Long Road to Nashville

Mathieu Olivier did not take the most direct route to the NHL. First, there were 350 combined regular season and playoff games with Moncton, Shawinigan and Sherbrooke. Along the way were three consecutive free agent invitations to NHL training camp with the Nashville Predators. Finally, Olivier reached the top of the peak on Tuesday night, suiting up for his first NHL game as the Preds took on the Winnipeg Jets.

Welcome to the show, @mattolivier24!

Another Banner Night in Gatineau

One of the most decorated franchises in QMJHL history, the Olympiques will be making room in Gatineau’s Robert-Guertin Centre rafters for another well-deserved accolade. The club will recognize yet another talent from its past as jersey number 25 will be retired in tribute to Martin Menard on Friday night.

A walk-on with the then-Hull Olympiques in 1994, Menard set the league on fire during the next three seasons, recording 378 points in 194 regular season games and 87 points in 53 postseason matches. Those performances led him to President Cup triumphs in both 1995 and 1997, with the latter postseason run culminating with a Memorial Cup title.

A Pair of Firsts in Rimouski

When the Rimouski Oceanic defeated the visiting Cataractes 6-4 last Sunday, a combination of unique firsts accompanied the squad’s third straight win. The game’s scoring was opening by a Rimouski native, center Luka Verreault, who scored his first career QMJHL goal. Two periods later, he would fire home his second career goal for the game’s insurance marker.

Meanwhile, in nets, the win went to rookie goaltender Thomas Couture. Not only did Couture turn aside 16 shots for his first career victory in the Q, he even managed an assist on the eventual game-winning goal!

Quebec Remparts Athletic Therapist Steve Belanger, currently in his 20th season with the organization, recently appeared behind the bench for the 1500th time of his QMJHL career last Saturday. In the past, Belanger also acted as an Athletic Therapist for the Sherbrooke Faucons and Shawinigan Cataractes, as well as for Team Canada on the international stage.

Cataractes center Xavier Bourgault netted his first career hat trick last Tuesday as part of a five-point night that he reeled off at home against the Sea Dogs. His was one of three hat tricks that happened in the “Q” last week, joining Titan winger Shawn Element and Cape Breton winger Egor Sokolov.

This was also one of the more successful weeks for goaltenders so far this year. On Remembrance Day, Olympiques netminder Remi Poirier steered aside all 27 shots he faced to earn his first career QMJHL shutout in a 3-0 win over the Islanders.

On Friday night in Chicoutimi, it was Alexis Shank’s turn to whitewash the opposition, making 34 saves in a 5-0 victory over the high-flying Phoenix. The Phoenix players would in turn take their frustrations out on Baie-Comeau the following afternoon, earning a 3-0 triumph behind Thomas Sigouin’s phenomenal 44-save record performance.