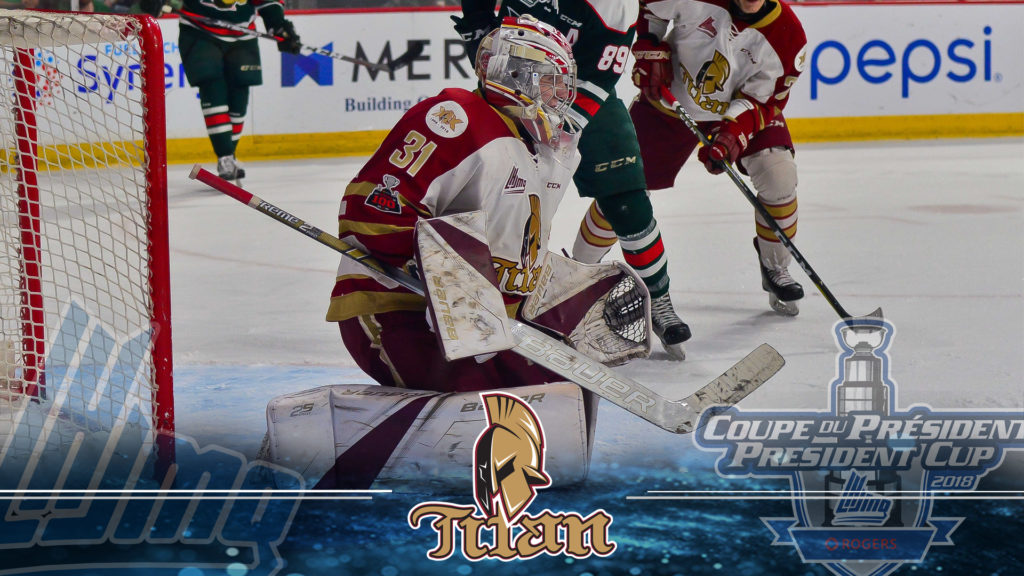 A mid season trade brought the Titan the goaltender they desired. Now, Evan Fitzpatrick is hoping to bring the Titan a championship.

If one was to place a title on Evan Fitzpatrick’s time in the QMJHL, it would likely be a combination of “Great Expectations” and “A Tale of Two Cities”.

First, the expectations. When you arrive in major junior as highly touted – and as high drafted – as Fitzpatrick was when the Sherbrooke Phoenix selected him fourth overall in 2014, a certain level of expectation is only natural. It was hoped that both the netminder, who turned 20 on January 28th, and the then third year expansion team would rise together.

Unfortunately, the Phoenix finished no higher than eighth during Fitzpatrick’s three full seasons in Sherbrooke. Their cumulative playoff record was 3-8. They missed the postseason entirely in 2017.

“In Sherbrooke, we were always out early”, Fitzpatrick recalls. “It could be tough.”

By extension of the team’s performance, Fitzpatrick’s performance in Sherbrooke was, for better or worse, a hot topic. His goals against average was never lower than 3.41, his save percentage never above .899%. He was aware of the comments offered from certain corners of the rink.

“Situations like that are always tough”, Fitzpatrick admits. “But I knew personally what I was doing and the people who really knew me, knew as well. In the end it’s never as bad as you think.”

As the calendar turned to 2018, Fitzpatrick’s fortunes turned as well. Traded to the Acadie-Bathurst Titan on January 2nd, the deal landed him at the starting point of a rejuvenation in his young career.

“[Being traded] was a bit of a shock but also very exciting, going to a team that was making a run”, Fitzpatrick said. “It was good to know that I wasn’t the only new guy. I knew a lot of the guys on the team already.”

That transaction, among others, has paved the way for the most successful season the Titan has experienced in 16 years. The club has been red hot since January, clinching first place in the Maritimes Division and going 12-2 in the postseason, en route to its first President Cup Final berth since 2002.

“The whole team has a huge desire to win,” Fitzpatrick commented. “We had a tough first round against Chicoutimi but rebounded to sweep Sherbrooke and Victoriaville. We’re really having a lot of fun and enjoying the moment.”

Fitzpatrick’s goaltending coach in Bathurst, David Kennedy, has witnessed something of a transformation in his latest student, much to the benefit of the surging Titan.

“The biggest thing with Evan is that he’s bought into everything we’re trying to promote”, Kennedy explained. “When he arrived, we worked on his technique and made some adjustments. We really just returned to the basics. It’s been fun working with him.”

What does Kennedy feel are Fitzpatrick’s greatest attributes?

“He makes timely saves”, he said definitively. “It’s also his preparation. It’s the closest thing I’ve ever seen to a pro at this level. He’s made a huge difference in the room. To see him have results like this has been incredible.”

Fitzpatrick entered the QMJHL Final against the Blainville-Boisbriand Armada with a playoff best 1.99 goals against average and a dozen wins under his belt. It truly has been the best of times for the St. Louis Blues’ 2016 second round draft pick.

“[My] season has had some ups and downs but I’ve found out a lot about myself. The Armada is a very good team but we’re just going to try and go out and enjoy every moment. We have a chance to turn a dream into reality.”

The expectations have never been greater for Fitzpatrick. And yes, it truly has been a tale of two cities. The time has now arrived for he and the Titan to attempt to earn another title – a President Cup title.