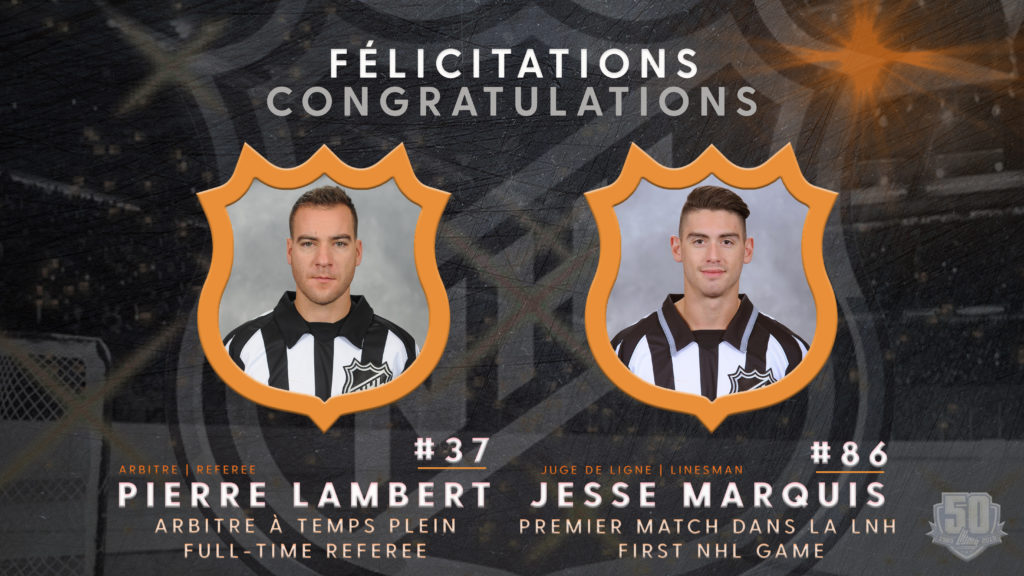 The Quebec Major Junior Hockey League would like to highlight the beginning of a new adventure for two of its ex-officials as the National Hockey League kicks off its season.

Referee Pierre Lambert, a native of Saint-Basile-Le-Grand, QC who worked a total of 134 QMJHL games over the course of the 2010-11 to 2012-13 seasons, as well as during the 2013 President Cup final round, has been promoted to a full-time position in the NHL.

Having spent five seasons within the AHL and ECHL levels, Lambert was rewarded for his dedication to the game and work ethic. He officiated his first NHL game back on November 17th of 2016, in Buffalo, NY.

As for linesman Jesse Marquis, he worked in the QMJHL during the 2015-16 and 2016-17 seasons, including the 2017 President Cup final. After a short stint in the American Hockey League, Marquis has been offered a contract to the National Hockey League. From now on he will be working games in both those leagues, the top two professional hockey leagues in North America.

A native of Bouctouche, N.B., Marquis will be working in his first NHL game this Thursday, October 11th, as the Edmonton Oilers will visit the Boston Bruins.

The QMJHL management, its officials and members of the Official Supervisors Committee would like to congratulate M. Lambert and M. Marquis for these promotions! We wish them the best of luck as they pursue the wonderful careers that lay in front of them.