The cream of the crop : a look at the 2017-18 season’s QMJHL Athletic Therapists 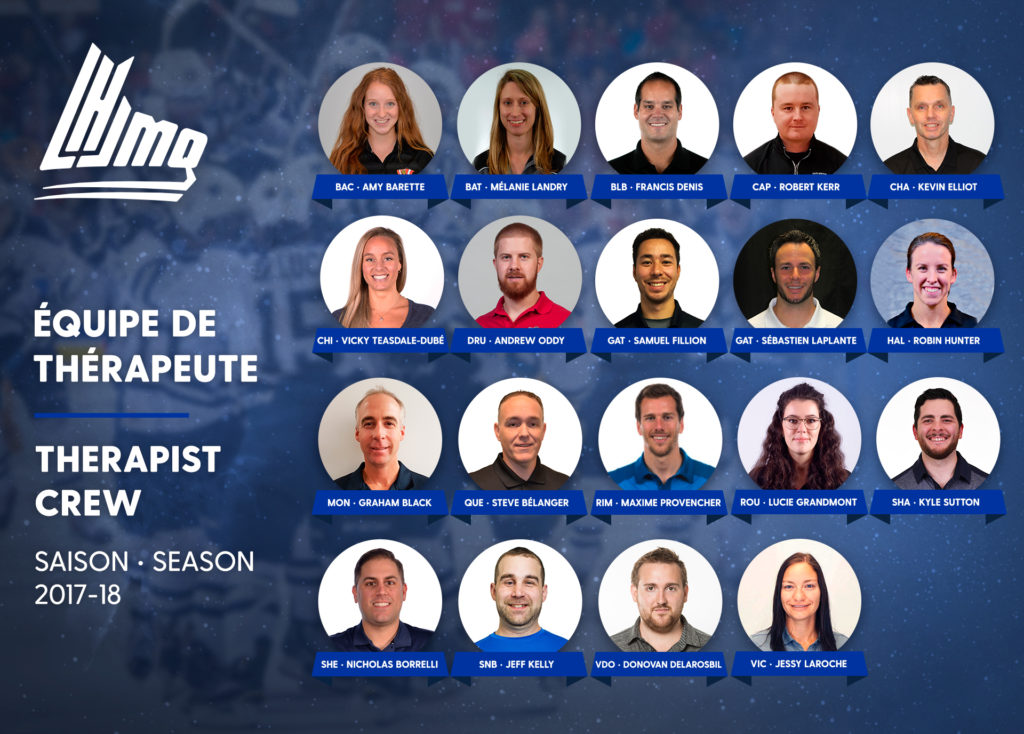 Team support staff may work in the shadows and in the backgrounds of their clubs, but certainly have important roles to play. Look no further than athletic therapists for a shining example of that. We hope the following article will help put the spotlight on our 19 athletic therapists across the QMJHL and provide some background on their day-to-day reality.

First off, all QMJHL therapists are certified and many of them hold bachelor’s degrees in Athletic Therapy and others hold degrees in Physiotherapy.

They must also undergo annual training to ensure they remain on the cutting edge of the industry while also meeting the standards both the QMJHL and their profession requires. At the League level, they must renew their first respondent courses every two years at the League Meetings. As for their certification, they must annually complete a certain number of credits in continuing education. These credits can be obtained via certain training programs, such as those for managing concussion protocol, massage techniques, etc. They can also gain credits by attending certain conferences.

At the beginning of each season, all therapists produce emergency plans – essentially a protocol to follow in cases of emergency. If an injury occurs during a game or training sessions, these therapists serve as first respondents. They work as a team with the onsite medical doctor and the opposing team’s therapist in order to provide the best possible care for the injured player.

Their work schedules are very demanding. The season begins in August and can span until May in some cases. During this intense period, they attend all team practices and games across the province of Quebec and all over the Maritimes.

They provide treatments to players prior to and after games and practices. They also ensure that the players’ physical preparation is optimized leading into games. And, of course, players can sometimes be demanding.

In addition to the aforementioned tasks, certain therapists are also responsible for organizing team meals and overseeing team nutrition, especially on the road. They also have several administrative forms to fill out for the League, for insurance purposes.

The role of therapist carries with it a considerable amount of pressure. They are constantly at the mercy of a minor or serious injury occurring. They must also in the case of serious injuries react very quickly and take the best possible decisions in the heat of the moment.

And finally, several also participate in Hockey Canada events (U18 and U17 Worlds, etc.) and take part in certain CHL events.

After completing her education, Amy set sails for Baie-Comeau to launch her therapist journey. Three years later, she is still is on board with the Drakkar.

“For me, I find it very stimulating to work in an environment where everyone is united by the same passion for the game of hockey. What I like most about my work in the QMJHL is being able to treat injury from the point of it occurring, through to when the player is rehabilitating and eventually returns to play. It’s rewarding to be able to contribute to a player’s development and to collaborate with a variety of other health care professionals in order to offer the best possible care.”

Melanie has now been the Titan’s therapist for two seasons.

“I was a fan of the QMJHL growing up and I would always watch the therapists behind the bench. I always found their role very interesting and it helped inspire me in my career choice. What I like the most about my line of work is the relationship I get to form with the players and the satisfaction that comes with helping them return to the ice and reach their goals.”

Francis just concluded his 10th season in the League. Before becoming an important team member at the Armada, he worked for the Montreal Junior.

“What has connected me to the QMJHL for all these years is my passion for the game and my desire to be part of a high-level sports team. I get to contribute to the success of the organization in my own way.”

A recent Athletic Therapy graduate from Concordia University, Robert was one of our rookie therapists this season in the QMJHL.

“As an athletic therapist, I have always aspired to work with high-level teams and athletes. Working in the QMJHL provides me with the opportunity to work with young, talented and motivated athletes every day and to be an integral part of a team. I also couldn’t have asked for a better organization to work for than the Screaming Eagles. My experiences and things I’ve learned are immeasurable and will serve me as much in the clinic, behind the bench and in life.”

Kevin concluded his 13th season on the island, and previously worked for the PEI Rocket. Also, he represented the QMJHL with Hockey Canada last winter at the World Junior Hockey Championships where he won a gold medal.

“My peers in the League have become like friends and family to me. Whether it’s the equipment manager – who many call my second wife – or the new therapists who just joined the League this season, we are all very close. We all look forward to meeting up at the draft or on the road during the season.”

“I also really enjoy seeing these 16-20-year-old guys grow up as they move from amateur hockey to the professional ranks or to see them become parents, etc. We often keep in touch long after their junior careers have ended.”

Vicky concluded her fourth season in the Saguenay region this year.

“Hockey has always been one of my favourite sports which have been part of my daily life since I was a kid. Being able to combine my passion for the game with my job as a full-time physiotherapist is a dream come true. And what I appreciate over everything else is being a part of such a large extended family. My job never actually feels like work to me!”

Andrew recently concluded his second season as the Voltigeurs’ therapist and he really appreciates his experience.

“Hockey has been my passion from a very young age. Coming to the rink every day doesn’t feel like work. I like the teamwork and lifestyle that makes up junior hockey.”

Sébastien and Samuel are sharing the job in Gatineau. Sebastien concluded his third season in the League while Samuel just wrapped up his first season after recently graduating from Concordia University.

“What pushed me to work in the QMJHL was my passion for the wonderful sport of hockey. When I got the chance to combine my professional career with a sport that has always been a passion of mine, it was an easy answer for me. What I like most is getting the chance to contribute to the growth of these exceptional athletes and to be surrounded other passionate therapists.”

“I was looking to work in a field and a sport that I was passionate about. Working with athletes and coaches that are so talented and dedicated pushes me to give my all and look to do better each and every day.”

After entering the League with the Cape Breton Screaming Eagles, Robin turned to the Halifax Mooseheads to continue his therapist journey in the League.

“I’ve always liked the atmosphere around team sports and now I have the chance to integrate that into my job. The competition, the highs and lows of wins and losses, the teamwork and the relations you get to develop are all elements that I adore. Then when you add getting the chance to work with young athletes and educate them on their bodies and help them perform at their best, it’s really gratifying.”

Graham complete his 19th season in the League. He started his career with the Victoriaville Tigres and has now worked with the Wildcats for 12 years.

“What like best about my job is how it truly is a team effort, the challenge of the competition and the chance to make a difference in the lives of these young people as hockey players and as people.”

Steve is one of our most senior therapists with a 21-season experience in the League. As we say, he is almost part of the furniture. He currently works in Quebec City after stops with the Sherbrooke Faucons and the Shawinigan Cataractes.

“I like this line of work because it is never routine. There are always surprises from week to week. I also really enjoy working with these youngsters even though a lot has changed since I started my career!”

After playing a few seasons in the QMJHL, Maxime just completed his fourth season as an athletic therapist.

“Hockey has always been a big part of my life, working in the QMJHL is my way of giving back to the sport I’m so passionate about.”

Lucie recently completed her third season with the Huskies in what has been a very eventful QMJHL journey so far.

“When I was younger, I used to go to watch games of my local team with my friends. That’s how I developed my passion for hockey and how I discovered athletic therapy. Working in the QMJHL is a bit like getting back to my roots!”

“What I like most about my job is my colleague J.F. Larochelle, what a gem. All joking aside, what makes my job so great is the family atmosphere of our team and entire organization here in Rouyn-Noranda, as well as with my colleagues league-wide.”

After a stop in Quebec City where he was an assistant therapist, Kyle took on the Cataractes’ job three years ago.

“What led me to work in the QMJHL is a combination of my love of hockey and my desire to work with elite athletes. What I like most is working with development of a motivated player who is prepared to give it his all to make the most of his time in junior hockey. Their passion and discipline are what drives me and makes my job so enjoyable. It’s also very rewarding to see a player reach the next level.”

Recently graduated from the Athletic Therapy program at Concordia University, Nicholas spent his first season in the League this past winter.

“I’ve always wanted to work for a high-level hockey team since I was young. I really enjoy working with young people who are passionate about their sport and motivated to improve.

Jeff is one of his organization’s pillars after completing his 11th QMJHL season with the Sea Dogs.

“I love having the opportunity to help young athletes reach their goals. I also enjoy the learning process that comes from each new experience. Whether it’s a championship season or a difficult one or the team misses the playoffs, they are enriching experiences that transmit from one generation of players to the next. The chance to help others while passing on what I’ve learned is what has motivated me to work in the QMJHL for all these years.”

Donovan completed his seventh season with the Foreurs and he contributes greatly to the team’s success.

“The QMJHL is a passionate league in constant evolution in efforts to better develop future NHL players. Our players benefit from unparalleled support and guidance.”

Jessy completed her seventh season in the League this winter. After beginning her QMJHL journey in Acadie-Bathurst, she has been the Tigres’ therapist for the last two seasons.

“I take a lot of enjoyment in being alongside these young players as they pursue their dreams and helping them perform their best. That’s why I like working in the QMJHL.”

All of the aforementioned therapists work closely with QMJHL therapist coordinator Phil Fait and team doctors. Each passionate about their work, they do an excellent job.

On behalf of the League, thank you for your support and for the quality service you provide our players. League management wishes you all a wonderful offseason!