The best of the best; meet the 2017-18 season’s QMJHL Equipment Managers 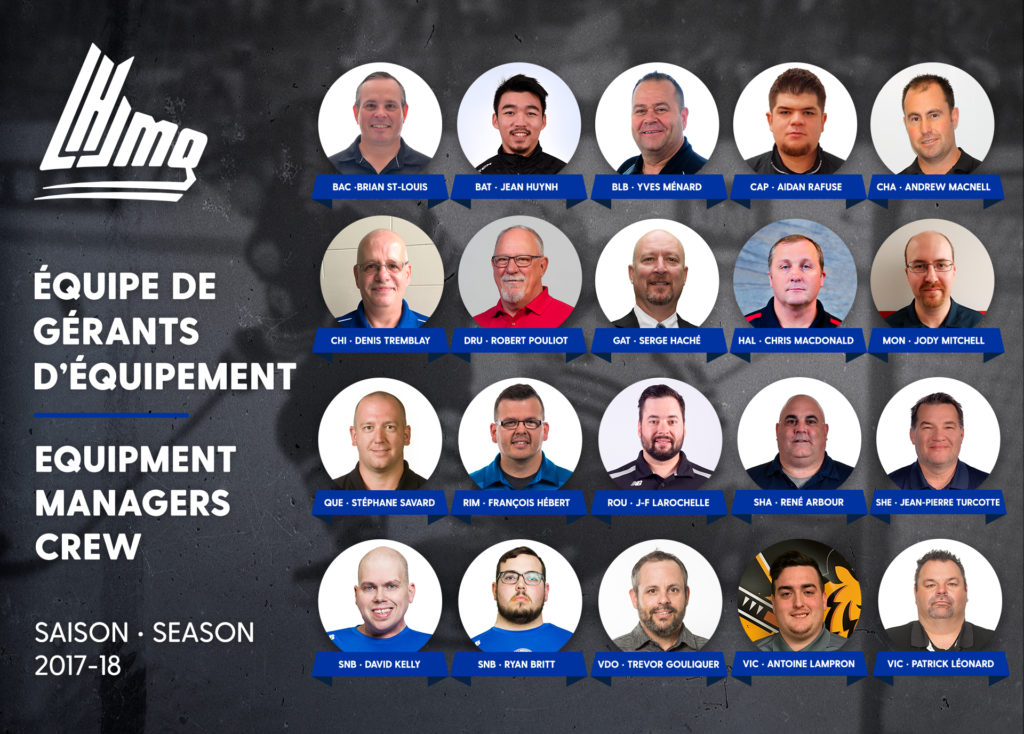 Broken sticks, unbuckled goalie masks, you name it. There is no shortage of situations that call for the help of the equipment manager, but their work isn’t limited to that. The role of equipment manager remains a bit of a mystery in addition to also often being underrated by many. That is why we are pleased to present the members of the QMJHL equipment manager fraternity along with a brief snapshot of their work.

They must, first of all, prepare the dressing room and the players’ bench for morning skates, practices and games. They must also coordinate with their peers on the other side regarding the opposition’s arrival and their needs (ice time, laundry, etc.).

Equipment managers are on hand for all practices and games. They are always on the lookout for a broken or poorly adjusted piece of equipment to either fix it or replace it. They must be extremely organized and alert since everything is a split-second decision in the heat of the action.

On top of taking part in all road trips, they are also in charge of preparing all necessary equipment for the club’s trip. Many equipment managers are also responsible for reserving hotels, buses, meals, etc.

The equipment manager is also in charge of handling orders from various suppliers. They have CHL agreements that must be followed regarding equipment suppliers. This also applies to sponsorship agreements.

NHL players aren’t the only ones with special requests and superstitions, QMJHL players have their own! As such, equipment managers not only answers to their needs, but also go beyond in efforts to help them reach their optimal performance level. Needless to say, our players are waited on hand and foot. All players’ equipment is maintained and cared for to the finest detail to ensure safety as well as performance.

Profiles of our Equipment managers for 2017-18

Brian is our longest-serving equipment manager with 32 QMJHL seasons under his belt. Currently with the Baie-Comeau Drakkar, he previously worked with the Hull Olympiques and he represented the league at several international tournaments with Hockey Canada.

“What I appreciate most about our jobs are the friendships we are able to form across the League. It’s always fun to bump into a fellow equipment manager, or a coach or a player and start swapping stories or just catching up on how they’re doing.”

“The chance to travel all around the province and across the Maritimes or even around the world is another aspect of my work that I really enjoy.”

“We have a lot of different things we need to do and you never know what a new day will bring so our days really fly by.”

Jean joined the Titan this season. During his first season with the team, he’s already become a President Cup champion!

“My goal is to one day work in the pro ranks and the QMJHL is a perfect springboard for that. Whether it be for coaches, team management, players, therapists or equipment managers, the standards of this league push to constantly improve each day.”

Nicknamed ‘Nounou’, Yves just concluded his seventh season in the League with the Armada.

“Being an equipment manager is enjoyable work. I particularly appreciate getting to work with these players and to being a part of our big Armada family. In order to do this job, you must above all else be passionate and to have an understanding spouse given the way we don’t really keep track of the hours we work.”

After a short stop in Halifax where he was the assistant equipment manager, Aidan recently concluded his first complete season in the League.

“I’ve always wanted to work in the QMJHL, it’s been one of my goals. After 10 years in the CIS (USports), I took a little break and now here I am!”

Andrew just completed his 15th season in the League, first with the PEI Rocket and now with the Charlottetown Islanders.

“What I enjoy the most about my job in the QMJHL is getting to work in the hockey world at a high level not to mention doing so in my hometown and getting to meet terrific people. I also like seeing our young players get drafted, seeing them grow as people and then succeed in life after junior hockey.”

Denis is another veteran in our League with 16 seasons all spent with the Sagueneens.

“What I enjoy most is being in contact with our young players. That’s what keeps us young after all these years. And this line of work is all about passion.”

Robert completed his fourth season in the League. Now with the Voltigeurs, he previously worked with the Titan.

“I knew what this job was all about and I just gave it my all. I really enjoy the contact with our players which is very rewarding. What I like most is ensuring that everything we do is as professional as possible so that our players can perform at an optimal level.”

Serge celebrated his incredible 30th season in the League this year. This enthusiastic manager is the owner of several President Cup rings to go with a few World Championship experiences with Hockey Canada.

“What I enjoy most is being surrounded each day by these athletes who are so talented, dedicated and disciplined. It’s also special to help them grow to become good citizens who are productive and hardworking in a sport they are passionate about.”

Chris has been part of the QMJHL family for 12 years now.

“This League has brought me a lot over the years, but it especially allowed me to grow as both as person and an equipment manager as well as letting me take my talents internationally. I’ve also created many bonds and have shared many great moments I will cherish forever. The QMJHL truly is like one big family since we all strive to be better and we all support our players as much on the ice as in the classroom. We all want to help them head in the right direction.”

Jody and his assistant Robert Cormier make a great team, cumulating 19 years of experience in the QMJHL.

“What I like most about my job is waking up each morning with a passion and pleasure of going to work each day. I like getting the chance to be a small part of the best years in the lives of our players.”

Stephane celebrated his 10th season in the League with the Remparts this year.

“What connects me to the QMJHL is the chance to work with these great student-athletes who represent our future. Our team reflects society in that we have future mechanics, doctors, etc. For now, I just try to pass on the knowledge I have and help them grow and reach their full potential.”

It’s hard to believe François has just finished only his second season in the League while being so involved and at ease in his role.

“What led me to the QMJHL was pushing my limits and I really love working people who share my passion for the game of hockey.”

He’s been with the Huskies for five seasons and Jean-François says he’s appreciating his experience in Rouyn-Noranda.

“In search of a new challenge, I joined the team during the 2013 Playoffs as a volunteer to learn about the role and what it entailed. That experience was great and ended up joining the team a few months later. After now my fifth season with the Huskies, I can say that my job has been very rewarding and I already have a few memorable moments that I won’t ever forget. Among those is our President’s Cup championship and then our participation in the Memorial Cup that spring in 2016. Working in the QMJHL has been very gratifying for me!”

Rene has just wrapped up his fourth season with the Cataractes.

“What I like most about my job in the QMJHL is the daily contact I get to have with the players and making sure they have everything they need.”

Jean-Pierre joined the Sherbrooke Phoenix when the club returned to the Eastern Townships six years ago. Despite his passion for hockey, J.P. has decided to turn the page and left the organization to face a new challenge. Thank you Jean-Pierre for all your dedication!

“In my case, having worked for a number of years at the Midget AAA level, several circumstances brought me to Sherbrooke and I’m very proud of that today. What I like most about my job is being able to connect with the players, coaches, team personnel and especially our ‘brotherhood’ of equipment managers which for me means everything.”

Nicknamed ‘DK’, David worked his 800th career game this season and was given a new position to conclude the season. His impeccable work with the Sea Dogs is worth mentioning. He is a model to follow and a terrific person who is very professional and appreciated by all.

Ryan Britt benefitted from DK’s wisdom and guidance and is now the team’s equipment manager. He previously held the same position with the Titan.

“With now two years of learning and new opportunities behind me I have already had the chance to have an impact on the players. For as long as I can remember, I didn’t dream of playing in the QMJHL, I wanted to be the cool guy that got to hang out behind the bench and who would hand a player a new stick when his broke. Our role goes beyond just fixing equipment and sharpening skates. There is also a social aspect based on the relationships we develop with the players and how we treat them.”

Trevor is a gold mine for the Foreurs and he recently completed his third season in the League as equipment manager.

“Hockey is a passion for me. Working in the QMJHL and for the Foreurs means a lot to me. What I like best about my job is to get to see the guys evolve on a day-to-day basis and eventually see them graduate to the next level.”

“I think the QMJHL is a very good league where we get to interact with professional players and which allows us to get there as well. The League also allows me to work in one of the greatest sports in the world – hockey.”

The QMJHL would like to thank all our equipment managers for their excellent work and we wish you a wonderful offseason.