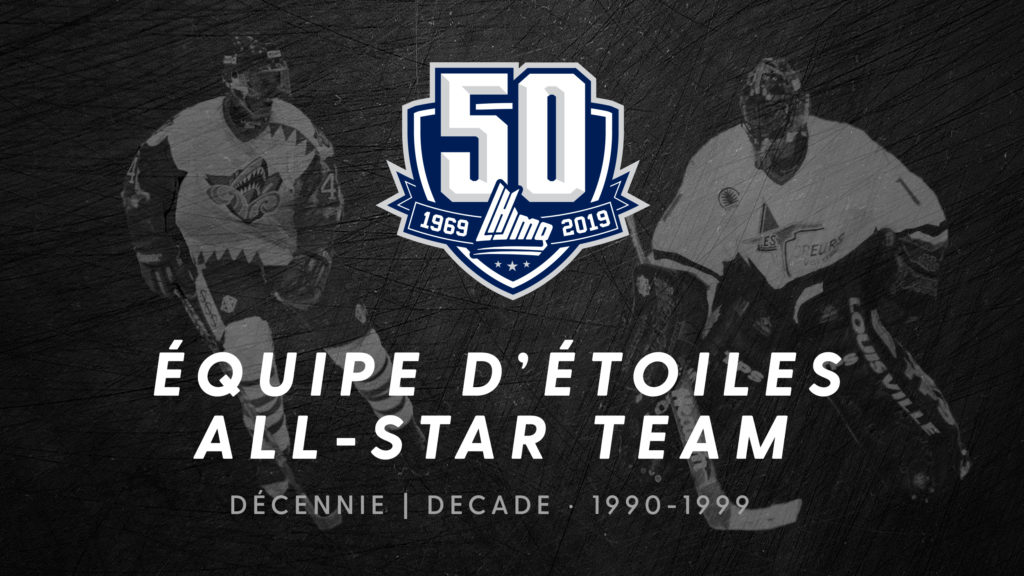 For this third segment, the QMJHL reveals in the table below the list of 25 individuals that each played a role in the rich history of the QMJHL, including 18 of which are already in the QMJHL Hall of Fame.

In 1990, Quebec-born goalies were busy ruling the professional hockey world. Over that decade, no less than 11 Quebec goalies were selected in the first round of the NHL Entry Draft, including three in 1995 alone. With that kind of dominance, the selection panel had no shortage of options to choose from in picking the top 3 goalies of the 90’s.

In the end, the panel gave the nod to Roberto Luongo, Felix Potvin and Jean-Sebastien Giguere. Luongo won two straight President Cups, with the Foreurs in 1998 and then with the Titan in 1999, in addition to piling up 123 career victories (regular and playoffs combined). Potvin won a President’s Cup of his own in 1991 when he was also named playoff MVP. Both Potvin and Luongo also represented the QMJHL internationally. As for Giguere, who was the first player in Halifax Mooseheads history, he had a .896% career save percentage, which was excellent at the time.

Up front, the 90’s also saw an impressive slate of forwards delight crowds across the league. Five of the 13 selectees are already QMJHL Hall of Famers beginning with Brad Richards, who remains the only player in history to have been named both Memorial Cup MVP and to have the Conn Smythe Trophy as NHL playoff MVP. Richards, of course, helped lead the Rimouski Oceanic to the promised land in 2000, in Halifax.

His close friend Vincent Lecavalier also left his mark on the QMJHL despite the fact he only played two seasons in the League. As a 16-year-old, he put 102 points and at the end of his second season (115 points) he would be chosen first overall at the NHL Entry Draft by the Tampa Bay Lightning.

Daniel Briere may not have been the biggest player around, but he was certainly spectacular. From 1994 to 1997, he would amass 416 regular season points with the Drummondville Voltigeurs. The Gatineau native then went on to a brilliant career in the NHL.

The 1990’s also saw Yanic Perreault score over 80 goals in a season (the last QMJHL player to do so) and Mike Ribeiro lead the league with 167 points including 100 assists in 1998-99. And who can forget Victoriaville Tigres’ star Alexandre Daigle who in the early 90’s drew crowds everywhere he went, on his way to being the top pick in the 1991 NHL Entry Draft.

Commonly known as “Mr. Titan” in Laval, Martin Lapointe also made his mark on Quebec junior hockey with his three straight participations at the World Junior Championship. To this day, no Q player ever played in three consecutive World Juniors for Canada. Pavel Rosa (First European player to win the QMJHL scoring title), Martin Gendron, Denis Chalifoux, Ramzi Abid, Martin Menard and Steve Larouche round out the selected forwards of the 1990’s.

On the blue line, the group of seven rearguards is led by Patrice Brisebois who before playing 1,000 NHL games enjoyed a brilliant four-year career with the Laval Titan and Drummondville Voltigeurs. Brisebois also won two gold medals at the World Junior Championship and appeared in three-straight President’s Cup finals. He also posted 258 points in 208 regular season games.

Jonathan Girard didn’t have the size of defencemen from his era, but he definitely had exceptional offensive flair. He totaled 201 points in 178 games with the Titan and Wildcats. Philippe Boucher enjoyed a brilliant career of his own with the Granby Bisons and the Laval Titan. Blessed with an NHL-calibre shot at a young age, Boucher sure filled the net over his three seasons in the Q.

As for the two coaches who have been selected, their inclusion was automatic following their amazing careers that included winning the Memorial Cup. We are talking, of course, of Michel Therrien with the Granby Predateurs and Claude Julien with the Hull Olympiques. In Julien’s case, he is one of only six coaches in the over 100-year history of the NHL to own both a Memorial Cup ring and a Stanley Cup ring as a head coach.