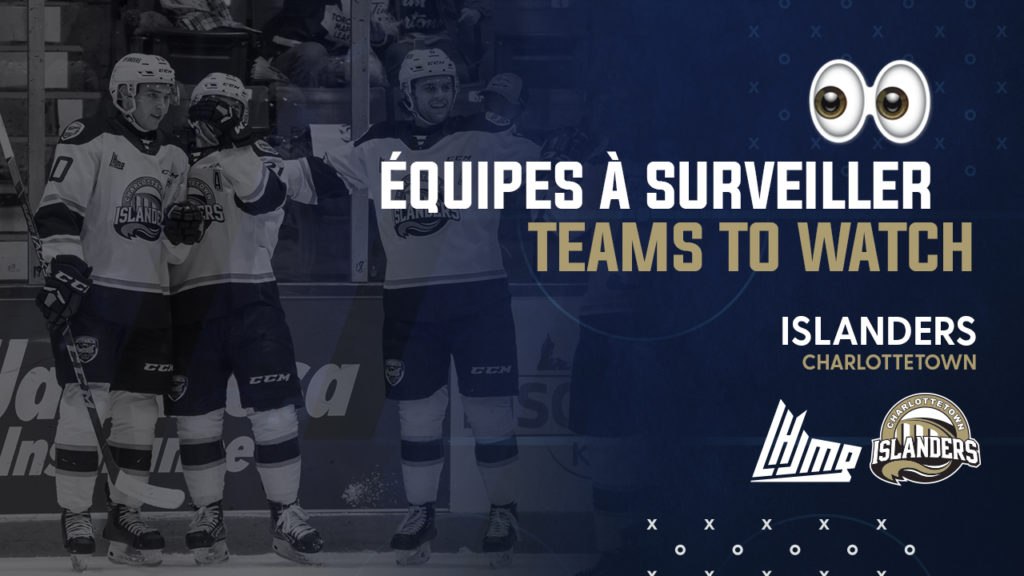 Seeing the Charlottetown Islanders at the top of the QMJHL standings reflects the guiding principles the organization has put in place.

“We’ve established the template for how we want to play,” Islanders Head Coach and General Manager Jim Hulton points out. “That helps us go out and find players that help fit that mold. It’s always a challenge to find the key pieces that fit in.”

The Islanders began tackling this challenge in the off-season, acquiring goaltender Colten Ellis from the Rimouski Oceanic.

“A big move in the summer saves you one at Christmas,” Hulton explains. “One of the initial things that stuck out to me with Colten, from the time he arrived here, was his professionalism. How he prepares mentally for both practises and games. That’s what pros do. He has a quiet, calm maturity about him. I think all of our players take a good lead from him.”

Once the season began, it became apparent that an expected issue, offensive firepower, would be far less of a concern thanks to a pair of veterans that are having jaw-dropping seasons. Between them, overagers Cedric Desruisseaux and Thomas Casey recorded a remarkable 100 points in their first 25 games.

“To me, in the case of Cedric, its confidence,” Hulton says of Desruisseaux’s career year. “He finally believes in himself. From the drop of the puck this year, he’s been a different guy and nothing short of fantastic for us. Thomas Casey has also been amazing for us. The two of them got us off to a strong start offensively.”

To compliment this development, Hulton augmented his lineup during the trade period with a pair of Sherbrooke Phoenix forwards, Patrick Guay and Bailey Peach, that showcase both versatility and offensive power.

“We didn’t think we were a “one and done” team where we would go all in on a half-year player,” Hulton proclaims. “We looked at Peach and Guay, and since the prices were going to be high to obtain them, they had to give us more than half a season. Peach will be back as a 20-year-old and Patty will be here for three seasons potentially and has all the earmarks of a bona fide number one centerman.”

On the back end, the window on the players acquired may be shorter but that doesn’t diminish the specific roles Sean Stewart and Braeden Virtue can play.  Both players bring experience and knowledge on the ice and in the dressing room of a club that already features such forces as Lukas Cormier, Noah Laaouan and Oscar Plandowski on the blue line.

“Stewart and Virtue are older guys who know their place in the league and know what it takes to be successful,” Hulton says. “(These) moves were more for the here and now, with 19-year-olds that can add a little grit and sandpaper. They’ve done a very good job of fitting in with our group.”

“We’ve got eight defensemen more than capable of playing at this level,” he goes on to say. “You look at all championship teams… you can’t have enough quality defensemen. That’s something we’ve tried to hang our hat on here for quite a while. I think we’re known for our team identity but that depth is the one thing that could be key for us.”

Depth, team identity and some fortunate timing in the building cycle have provided this crew with the potential for a special couple of years despite the abnormal circumstances that surround it.

“We have a two-year window,” Hulton concludes. “We’ve got a good group to work with. We’re fortunate that we’re competitive this year in such a strange, unusual season. We hope that when we return to normalcy we can continue to be as competitive as we are now.”