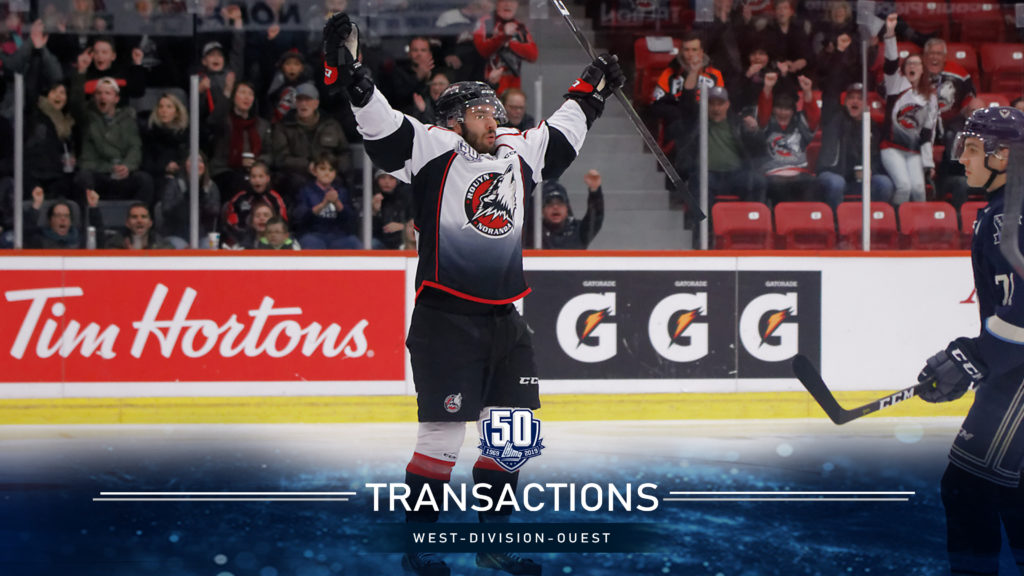 Two teams from the West Division were quite busy up until the latest trade deadline. The Rouyn-Noranda Huskies had more of a buyer’s role over the past month, while the Blainville-Boisbriand Armada were more of the seller’s type. In the meantime, Val-d’Or Foreurs and Gatineau Olympiques general managers, Pascal Daoust and Alain Sear, were less active during the month of December.

The Huskies find themselves atop the Quebec Major Junior Hockey League’s overall standings with their 71 points in 43 games played. Five deals were done by General Manager Mario Pouliot in December, including a few blockbuster ones.

Veteran Louis-Filip Côté was acquired from the Quebec Remparts and will return to Rouyn-Noranda in exchange for Romain Rodzinski as well as picks in the next three entry drafts. As for Joël Teasdale, he headed North to join the Huskies following a trade that sent Maximilien Ledoux and five draft picks to the Armada. Another massive trade made by Pouliot was the acquisition of one of Team Canada’s defencemen during the latest World Juniors tournament, Noah Dobson, against four draft picks that include the Huskies first round selections in 2019, 2020 and 2021.

Pouliot fully embraces the “buyer’s” approach taken by his team this year. “There is a lot of parity in the League this year. Important transactions were done by numerous teams such as Drummondville, Halifax, Baie-Comeau, Moncton, Cape Breton and Charlottetown”, admitted Rouyn-Noranda’s general manager and head coach.

This squad can now be considered the team to beat in both the West Division, as well as in the entire League. The Huskies wanted to improve their roster, one that was already being considered strong when the season got underway.

“Since the start of the season, our players have given us some great performances”, admitted Pouliot. “But we needed to try and make our roster better in order to compete even more in the second half of the season.”

With his newly acquired players and the solid core of premier players that were already there, Pouliot is now satisfied with all of his team’s aspects.

“We have depth among our team; from our forwards all the way to our goaltenders. We’re happy with the squad we’ve got and with the chemistry that lies within our group.”

It’s important to highlight that goaltender Samuel Harvey is among the very best in the Q with his stellar .921% save percentage, and that centreman Peter Abbandonato is currently in second place of the QMJHL scoring race.

In adding Dobson, the former Acadie-Bathurst Titan captain, and Teasdale with his 40 points since the start of the season, this team is now one of the biggest contenders in all of the QMJHL.

The Armada, the Foreurs and the Olympiques are currently fighting for second place in the West Division as only three small points separate them in the standings.

Armada General Manager Pierre Cloutier has been very busy this season. Since the month of September, his team has been involved in over ten trades that have seen a total of 11 players change squads. One of the most important transactions involved veteran forward Joël Teasdale.

“Accepting to trade Joël Teadale was a tough pill to swallow but we felt it was what was best for our organization”, admitted the Armada general manager. Cloutier also states that his team is in a transition period and not in the midst of a rebuild since it has managed to remain competitive this season. That Armada has always kept its winning mentality since the start of the season, despite the losses of key players such as Alex Barré-Boulet, Alexandre Alain and Drake Batherson.

“We had a good feeling that our team would be solid and competitive once again because our core players were mature”, says Cloutier.

But management felt like some changes needed to be made and the trades have benefitted the Armada by obtaining numerous draft picks for years to come. The general manager admitted that he wanted to build on some solid foundations in order to become more competitive in the near future.

The Val-d’Or Foreurs have concluded the least number of transactions in the division, having traded with opponents only five times since the start of the season. Val-d’Or currently finds itself out of a QMJHL playoff spot.

The trades done by the Foreurs were minimal; four times the team traded future draft picks in exchange for depth players such as Peyton Hoyt, Xavier Bolduc, Jordan Spadafore and Renat Dadadzhanov. Since December 16th of 2018, only four transactions were done by Pascal Daoust.

Gatineau made six transactions since the start of the 2018-19 season and the team has benefitted from a good balance of draft picks and active players in those trades.

The six trades made by the team happened between December 16th 2018 and January 6th 2019. Gatineau lost the services of Shawn Boudrias when the latter was traded to the Cape Breton Screaming Eagles before Christmas. Boudrias suited up in the 2018 CIBC Canada Russia Series and had picked up 30 points in as many games with Gatineau before heading to the Maritimes.

Gatineau benefitted from this trade by landing a 2020 first round pick and 16-year-old Ben Allison, who plays with plenty of grit, and that was taken in the second round of the 2018 QMJHL Draft.

All in all, with so many roster moves it will be interesting to follow the West Division’s teams until the end of the season!