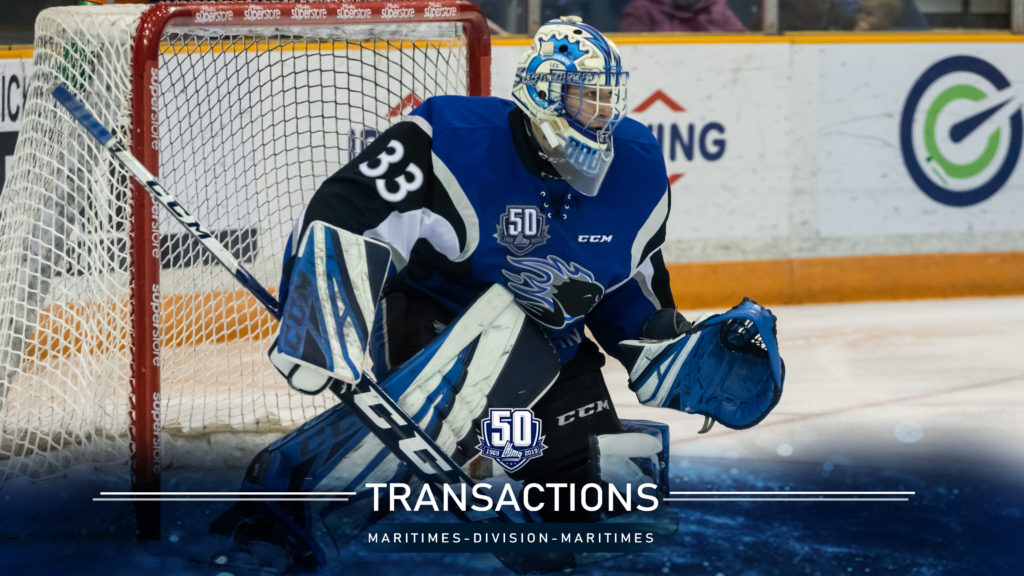 With the QMJHL trade period in the rear-view mirror, the playoff drive is officially on. As a result of the Halifax Mooseheads being named the host club for the 2019 Memorial Cup, two teams from the “Q” will be making their way to the Nova Scotia capital in hopes of claiming junior hockey’s top prize.

Teams around the league have made it known whether or not they intend to vie for the second available spot at this May’s national championship through the roster changes they have executed.

Of course, teams in the Maritimes Division won’t have to travel far geographically to get to the event should one of them earn the right to become the second QMJHL representative. However, those that feel that they have put themselves in a competitive position to challenge for a title run still have a marathon before them.

The Cape Breton Screaming Eagles know this. They also feel they are up to the task.

The Eagles have hovered around the middle of the standings for much of the season. However, with impact players such as forwards Mitchell Balmas, Mathias Laferriere, Egor Sokolov and Declan Smith, defenseman Leon Gawanke and goaltender Kevin Mandolese, Head Coach and General Manager Marc-Andre Dumont sees a core that could be expanded upon in order to challenge for a successful postseason run.

“We had a group of players conducting themselves well on the ice,” Dumont explained. “They’ve been developing good chemistry. We felt the timing was good to make moves to support them.”

Those moves included the acquisition of wingers Shawn Boudrais and Derek Gentile, both of whom had been averaging exactly a point per game with the Gatineau Olympiques and Charlottetown Islanders, respectively. Also entering the fold are a pair of defensemen. Nathan Larose arrived from the Saint John Sea Dogs at the beginning of the trade deadline, while Robbie Sandilands was acquired from the Shawinigan Cataractes at the deadline.

Dumont pointed out the background of these carefully planned moves.

“Myself and our hockey committee look many months out to identify players that we feel may be a benefit to our organization,” Dumont said. “It’s an ongoing conversation. We get more precise [in our discussions] by December. With Shawn, Derek and Roddie, we have players that can help us both this year and possibly next year. Nathan could be with us for the next two years. That played a factor in trading for these players.”

Dumont does not hesitate when asked what the key to success will be in the unofficial second half of the season, and beyond, with this revamped roster.

“We need contributions from everyone,” Dumont stated. “It can’t just be [a few] players. When we had [Leon] Gawanke out of the lineup last month while he was at the [Division I] World Juniors with Germany, we got those contributions from everyone and we had a good month. Players are developing a high compete level, which will help their progression. That will be the key to our success.”

The Eagles have competition within their own province, let alone their own division. The division leading Mooseheads have bolstered their roster since the start of the regular season, obtaining center Samuel Asselin from the Acadie-Bathurst Titan and currently injured winger Ostap Safin form the Saint John Sea Dogs in September. During the trade period, the Moose acquired veteran center Keith Getson from the Charlottetown Islanders, shifty winger Maxime Trepanier from the Gatineau Olympiques and rugged defenseman Alexis Sansfacon from the Titan.

Another team that has hung around the upper echelons of the “Q” standings is the Moncton Wildcats. A club with a young core, Moncton stayed comparatively quiet on the trade front, picking up two-way winger Charles-Antoine Giguere from the Blainville-Boisbriand Armada and bolstering the blueline with the arrival of Christian Huntley from the Quebec Remparts. With the loss of Swiss defenseman Simon Le Coultre for the season due to shoulder surgery, the team also acquired Finnish rearguard Aleksi Anttalainen in a deadline day deal with the Armada.

The biggest move in Moncton came the day after the trade deadline however, as the club relieved Head Coach Darren Rumble of his duties following a five and a half year tenure behind the Wildcats bench.

Staying the Course in the Port City

With a premium placed on high end talent throughout the league, teams with an eye towards the future took the opportunity to align their rosters accordingly during the trade period.

To that end, the Saint John Sea Dogs continued to practise the patience that has been their mantra since the start of the season. They also added a new word to their vocabulary over the trade period: responsibility.

“I was impressed by how responsible we were,” Sea Dogs General Manager Trevor Georgie commented. “We were responsible but active and these trades will help us now and in the future. Our moves were very calculated.”

With as many as 12 rookies in the lineup on any given night, the Sea Dogs’ philosophy to follow a patient climb back to the top remained in the forefront. In dealing winger Ostap Safin to Halifax, defenceman Nathan Larose to Cape Breton and goaltender Alex d’Orio to the Baie-Comeau Drakkar, the organization received in return, among other assets, first round draft picks in 2020 and 2021, as well as skilled 16-year-old center Alex Drover.

For Georgie, it’s all part of the plan.

“We stuck to our blueprint,” he explained. “Our plan was to compete for a championship in three years and we did a lot to help accomplish that with these trades. We now have six first round picks in the next two drafts. Acquiring Drover gives us four players from the first round of last year’s draft. We’re very happy with that.”

The need to also provide a veteran presence to this group of young players was not lost on the organization. Georgie’s acquisition of goaltenders Mikhail Denisov from the Shawinigan Cataractes and Zachary Bouthillier from the Chicoutimi Sagueneens, as well as defenseman Benjamin Gagne from the Quebec Remparts, helps address that situation.

“It can be tough as a young player to compete at this level,” Georgie admitted. “We wanted to do what we could to insulate our young group. Benjamin Gagne was a big pickup, having been a captain in Quebec. To add experience through guys like Gagne, Denisov and Bouthillier was so important. We were able to make the team better today, at a minimal cost.”

It’s been a tough year in Saint John. It hasn’t shifted the focus of the man primarily responsible for building the roster.

“Nothing worth having comes easy,” Georgie said.

It’s the hope of the Sea Dogs that the transactions made leading up to the deadline will make life that much easier, both in the coming weeks and years.

The Charlottetown Islanders also placed a premium towards future success in their dealings. In dealing forward Keith Getson to Halifax for fellow veteran Jordan Maher and a second and a pair of draft picks, Derek Gentile to Cape Breton for budding 17-year-old defenseman Noah Laaouan, along with superstar defenseman Pierre-Olivier Joseph to the Drummondville Voltigeurs for rearguard and 18-year-old New Jersey Devils prospect Xavier Bernard, a first and two second round draft picks, the Islanders have made it clear that they intend to be a force to be reckoned with in the Maritimes Division for years to come.

The defending Memorial Cup Champion Acadie-Bathurst Titan was incredibly active on the trade front since the start of the season, pulling off no less than 16 transactions. The most impactful deals involved sending center Samuel Asselin to Halifax, defenseman Keenan MacIsaac and winger Ethan Crossman to the Baie-Comeau Drakkar and blueliners Michal Ivan and Noah Dobson to the Drummondville Voltigeurs and Rouyn-Noranda Huskies, respectively. In obtaining through these trades no less than 10 draft picks in the top three rounds of the next three QMJHL Entry Drafts, as well as a pair of promising blueliners in Olivier Turan and Cole Larkin, the Titan have their sights clearly set on another championship run in the coming years.

With the rosters set and the battle lines drawn, there’s nothing left to do but hit the ice and see where these newly constituted rosters find themselves as the months and years roll along.