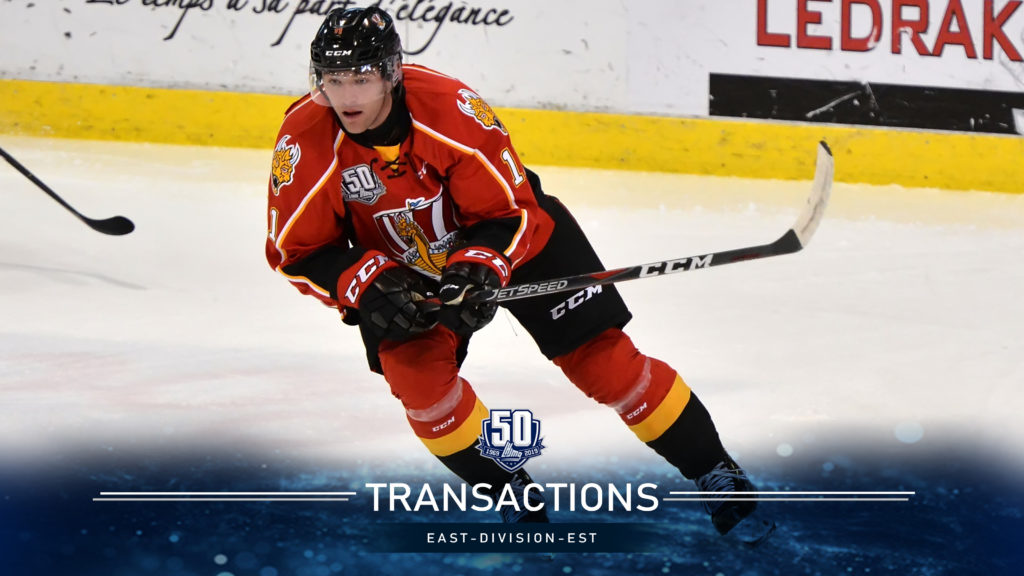 Even though most of them have unlimited call and data packages, some QMJHL general managers might be receiving a notice from their providers to warn them against the overuse of their cell phones!

It could be the case in Baie-Comeau and Quebec, where general managers Steve Ahern and Patrick Roy where wheeling and dealing numerous transactions over the past three weeks.

In the North, the head of hockey operations for the Drakkar managed 11 trades. All in all, his roster moves involved 18 players and 21 draft picks, including 16 of the latter who were traded to his dance partners.

“One of our objectives before the final trade period was to bolster our defensive corps with some experienced blueliners”, mentioned Ahern.

Those veterans are called Pascal Corbeil, Mathieu Charlebois and Keenan MacIsaac, respectively acquired from the Blainville-Boisbriand Armada, the Victoriaville Tigres and the Acadie-Bathurst Titan.

“We also wanted to increase the physical play of our forward group”, he added.

Ahern managed to do just that by acquiring, among others, Ethan Crossman from Acadie-Bathurst and Thomas Ethier from Blainville-Boisbriand.

At the top of the standings

Despite the relative youth of his squad, a first half of the season that exceeded all expectations somewhat forced the Drakkar general manager to make some transactions.

“We had laid the foundation for our team thanks to a few trades during the last entry draft and we were doing well since the start of the season. We’re glad we can count on two high quality Europeans in Ivan Chekhovich and Yaroslav Alexeyev, which probably won’t be the case next season”, says the Drakkar G.M. “Younger guys like Gabriel Fortier, Nathan Légaré and Xavier Bouchard have also given us great performances in the first half of the season.”

“That’s why we decided to become “buyers”, all while being cautious. Sure, we sacrificed some draft picks but at some point we will make up for them”, stated Ahern, who wishes that Drakkar fans have “an intense team that’s fun to watch when it plays” over the next few months.

To his defense, Ahern was also faced with some unexpected situations in the crease. Without looking up the actual facts, it would be hard to bet that another general manager has already traded six young masked men over the course of the same transaction period!

“Two of our team’s goaltenders had asked for a trade (Xavier Bolduc and Justin Blanchette), and then Dereck Baribeau (acquired from the Remparts) had a very serious injury to his leg just 48 hours before the trade deadline. With a timetable set at four to nine weeks before he gets back, we didn’t have much of a choice”, specified Ahern, who quickly traded with the Sea Dogs to land veteran Alex D’Orio’s services.

In Quebec City, Roy managed to add or release 21 players from his roster or his protection list. During those moves, the Remparts bench boss and G.M. managed to land 11 draft picks from his peers, while giving up six of his own to make the deals.

While the shake-up didn’t make the Remparts squad better in the short-term, the draft picks inventory definitely improved itself. As a matter of fact, the Quebec-based team hasn’t possessed as many picks as it does now over the past decade.

Also, because the demand wasn’t very high for European-born players (among the top seeded teams), Roy was able to keep the rights to his top player, Swiss forward Philipp Kurashev. You can bet that the team’s fans are more than happy to see him stay!

In Rimouski, Serge Beausoleil took a more conservative approach in his “buying” ways. It was an understandable cautious approach since his franchise player Alexis Lafrenière will still be around for next season.

By adding two solid forwards to his group (Jeffrey Durocher and D’Artagnan Joly) and a veteran netminder (Tristan Bérubé), the Oceanic will try to punch its ticket to the Maritimes at the end of the upcoming playoffs.

As for the Chicoutimi Saguenéens, General Manager Yanick Jean completed the third phase of a four-way deal and added William Dufour, a promising and talented forward, to his roster.

The future is undoubtedly bright in the Saguenay region as a trio of 16-year-olds will be keeping fans at the Centre Georges-Vézina on the edge of their seats for years to come.

While he did salvage his congestion in the crease by dealing Zachary Bouthillier to the Sea Dogs, Jean didn’t take the bait and decided to hold onto his star defenceman Jérémy Groleau.

“The trade period allowed us to resolve certain issues we had and mostly to land a forward (Dufour) that is in the same age group as Hendrix Lapierre and Théo Rochette”, he says.

“Despite the fact that we all wish the rebuilding process was over quicker, we can’t afford to rush some of the development steps. As for Jérémy Groleau, the trades made by Drummondville (for Pierre-Olivier Joseph) and Rouyn-Noranda (for Noah Dobson) kind of scared other teams away. Groleau has been playing for the Sags for four years and we’re proud to say that he’ll get to finish his career as part of our franchise.”