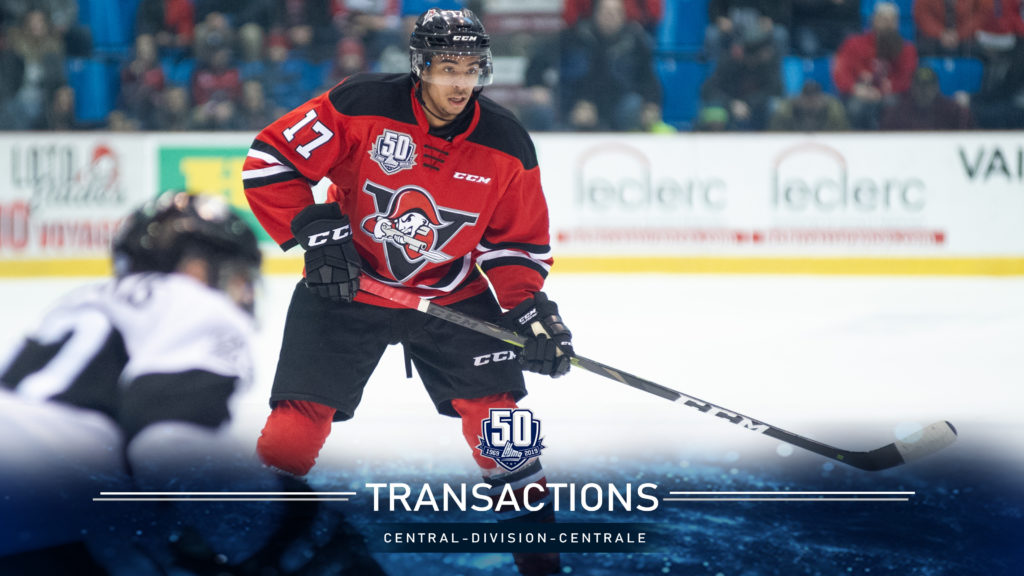 The Drummondville Voltigeurs continued their pursuit of a President Cup championship during the holiday trade period by bolstering their back end.

Joseph, acquired from Charlottetown for two players and three draft picks, brings size and skill to the blueline. Ivan offers championship experience from last season with Acadie-Bathurst, the latter which received Austrian rearguard Oliver Turan and a 2020 draft pick from Drummondville in the trade. Savinsky came over from Baie-Comeau, while Morrone made his way from Quebec.

“We have really good depth at all positions,” Desroches said. “Adding a guy like Ivan, who played big minutes for Bathurst last year in their Memorial Cup run, is a big plus for us. The acquisition of Joseph is also a big plus. We now have eight defencemen who can play.”

“We have a fast team and we wanted to keep that identity,” Desroches said. “We did that with our trades, and these new players will bring us more experience.”

One of Desroches’ most important upgrades came when he landed veteran forward Gregor MacLeod in a trade with Quebec back in September. The overager from Dartmouth, N.S., is one of Drummondville’s top scorers and boasts playoff experience acquired with both the Remparts and Islanders.

“He had an outstanding camp with the Ottawa Senators,” Desroches said. “He’s really talented, he has a great shot and he can play both ways. He’s been a good leader for us.”

Joseph and fellow Voltigeurs rearguard Nicolas Beaudin were both cut from Team Canada’s World Juniors squad. Forwards Joseph Veleno and Maxime Comtois made the grade, but both came home without a medal. A league championship could serve as redemption for all of the above.

“We have a team with the potential to go to the final,” Desroches said. “We’re really happy with the kind of team we have, and we’re looking forward to seeing all the pieces come together. We’re also excited for the fans. With reason, they have big expectations for us and we’re the talk of the town right now. We can do something special here this year.”

While Drummondville is aiming for its first league title since 2009, the Shawinigan Cataractes are building for the future. It’s a familiar scenario for general manager Martin Mondou, who’s seen the approach work before. With Mondou at the helm, the Cataractes won the 2012 Memorial Cup and were QMJHL finalists in 2009 and 2016.

“It’s tough [to rebuild], but it does pay off when the kids stay together and develop together,” Mondou said. “Over the last ten years, that’s pretty much the plan we’ve had. But that’s no excuse. We have to be a better team next year.”

Mondou believes that process begins on the blueline, which is why he acquired a trio of towering 17-year-old defencemen. Shawinigan received Pierre-Olivier Bourgeois from Rouyn-Noranda for third- and fifth-round draft picks in 2019, along with Marc-Antoine Pépin from Sherbrooke in exchange for a 2020 10th-rounder, and Felix Tremblay from Quebec for a fourth-round draft pick in 2019.

“We’re happy,” Mondou said about his moves. “The plan was to bring in some D-men with skill and good skating abilities. We got younger and we wanted to balance our team and try to keep as much of our players together as possible. We see our kids getting better night after night.”

Earlier in the season, the Cataractes also picked up 18-year-old blueliner Benjamin Thibeault from Victoriaville, with a 2021 draft pick going to the Tigres, while goaltender Justin Blanchette came courtesy of Baie-Comeau for fellow netminder Lucas Fitzpatrick over the holidays. In addition, Shawinigan added 19-year-old forward Mikael Robidoux from Quebec for a 2021 fourth-rounder. Robidoux had three goals in his first seven games with the Cataractes.

With Drummondville at the top of the division and Shawinigan at the bottom, the in-between teams also made moves in hopes of finishing strong.

Victoriaville also acquired defenceman Mederick Racicot and a 2020 pick from Val-d’Or for two draft picks, along with forward Anthony Poulin from the Armada for a 2019 pick.

In addition, the Tigres obtained a 2020 first-round draft pick and 16-year-old forward Nicolas Daigle from Rimouski for 2017 Calgary Flames draft pick D’Artagnan Joly. The first part of the deal saw Baie-Comeau move Joly to Victoriaville for 19-year-olds Marc-Antoine Brouillette and Mathieu Charlebois, with two draft picks going to each club. Daigle is enjoying a fine offensive season in Quebec’s midget AAA ranks with the Lévis Chevaliers.

It will now be interesting to see if any team from the Central Division will be able to catch up to the Voltigeurs over the second half of the QMJHL regular season.