Special teams help Titan skate to a win in Game 3 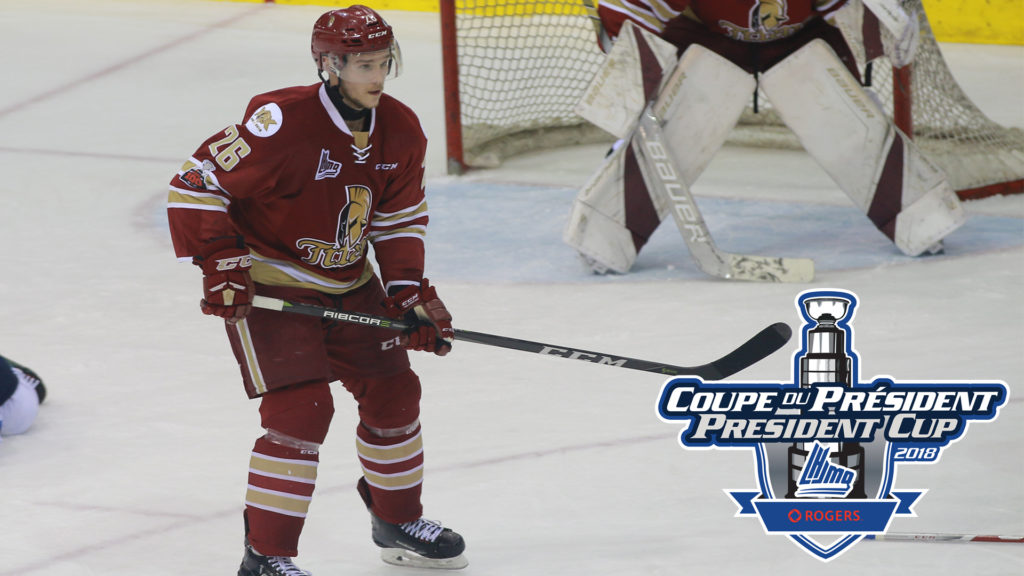 Playing in its first home game of the 2018 Rogers President Cup Final on Tuesday night, the Acadie-Bathurst Titan did not disappoint fans in a sold-out K.C. Irving Regional Centre by topping the Blainville-Boisbriand Armada by a 5-2 score to take a 2-1 series lead.

Special teams played a key factor in the outing as the Titan scored twice on its four power play opportunities – both in the opening period – and later added a shorthanded insurance goal in the third frame.

Veteran defenseman Olivier Galipeau led the way offensively for the Titan, ending the night with one goal and two assists. Fellow blueliner Noah Dobson picked up a pair of assists, Antoine Morand scored once and added an assist of his own, while Samuel L’Italien, German Rubtsov and Jeffrey Truchon-Viel rounded out the scoring in the win.

Alex Barré-Boulet and Joël Teasdale both found the back of the net in the second period in what would end up being the Armada’s only goals of the game.

Between the pipes, Evan Fitzpatrick continued his strong play by turning aside 26 of the 28 Armada shots, while Émile Samson made 28 saves to drop a second straight decision for just the second time in the playoffs, and third time all season.

Rubtsov opened the scoring 49 seconds past the first period’s midway point when he redirected a point shot from Dobson on the power play. The Titan made it 2-0 with 37 seconds left in the frame after Galipeau jumped on a loose rebound in the crease, once again with a man advantage.

The Armada seemed to have the momentum back when it tied the game in the second period. First, it was Teasdale who tapped in a loose puck from the side of the net on the power play at 12:48. Just under three minutes later, Barré-Boulet one-timed a pass from the hashmarks to make it 2-2.

But the Titan closed off another period with a late goal, this time thanks to a one-timer blast off the stick of Morand with 34 ticks left before the second intermission.

The home team made it 4-2 when a shorthanded 2-on-1 saw Galipeau feed a perfect pass to L’Italien who redirected over a sprawling Samson at 12:37 of the third period. Nearly three minutes later, Titan captain Truchon-Viel put up the game’s final goal with a perfectly placed wrist shot inside the post that made it 5-2.