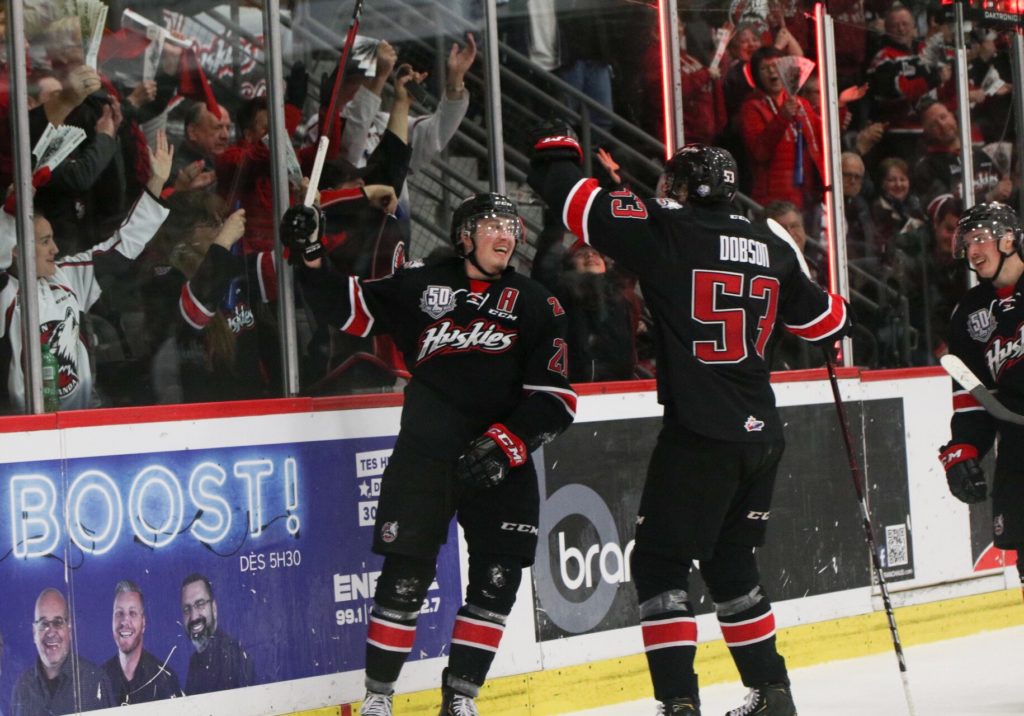 The Rouyn-Noranda Huskies skated to a 5-2 home win over the Halifax Mooseheads on Thursday night to win the opening game of the 2019 Rogers President Cup Final.

Huskies captain Rafaël Harvey-Pinard and Félix Bibeau led all forwards with two goals and on assist each while Noah Dobson led all blueliners with one goal and three points of his own. Winger Joël Teasdale also chipped in with a pair of assists for the Huskies, while goaltender Samuel Harvey was tremendous to earn the win between the pipes, turning aside 34 of the 36 Halifax shots.

For the Mooseheads, defenceman Justin Barron netted his second tally of the current postseason while Raphaël Lavoie scored his playoff-leading 18th goal in the losing effort. Halifax netminder Alexis Gravel was sensational on more than one occasion in the game, making 32 saves all while shutting down the Huskies on seven of their nine powerplays.

Harvey-Pinard scored the opening goal 4:01 into the game’s first period after redirecting a perfect pass from Dobson down low. Just over five minutes later, the Huskies doubled their lead after Teasdale forced a turnover and Bibeau pounced on his own rebound from in close.

Barron would score with a little over five minutes left in the opening period to send the Mooseheads into the first intermission down 2-1 to the Huskies.

In the second period, Dobson fired a powerful one-timer from the point on a Huskies power play to give Rouyn-Noranda its two-goal lead back. The Mooseheads would cut into the Rouyn lead once more with Lavoie scoring on a shorthanded breakaway 13:47 into the middle frame to make it a 3-2 game.

The Huskies would go on to score two more goals in the third period. First, it was Harvey-Pinard who netted his second of the night, an insurance marker coming just 49 seconds into the final frame. Then, it was Bibeau’s turn to net his second of the game, scoring at the 16:05 mark during a Huskies man advantage.

Both teams will have a short rest as they get back to the action with Game 2 set to take place Friday night at 7 p.m. ET, once again in Rouyn-Noranda’s Iamgold Arena.