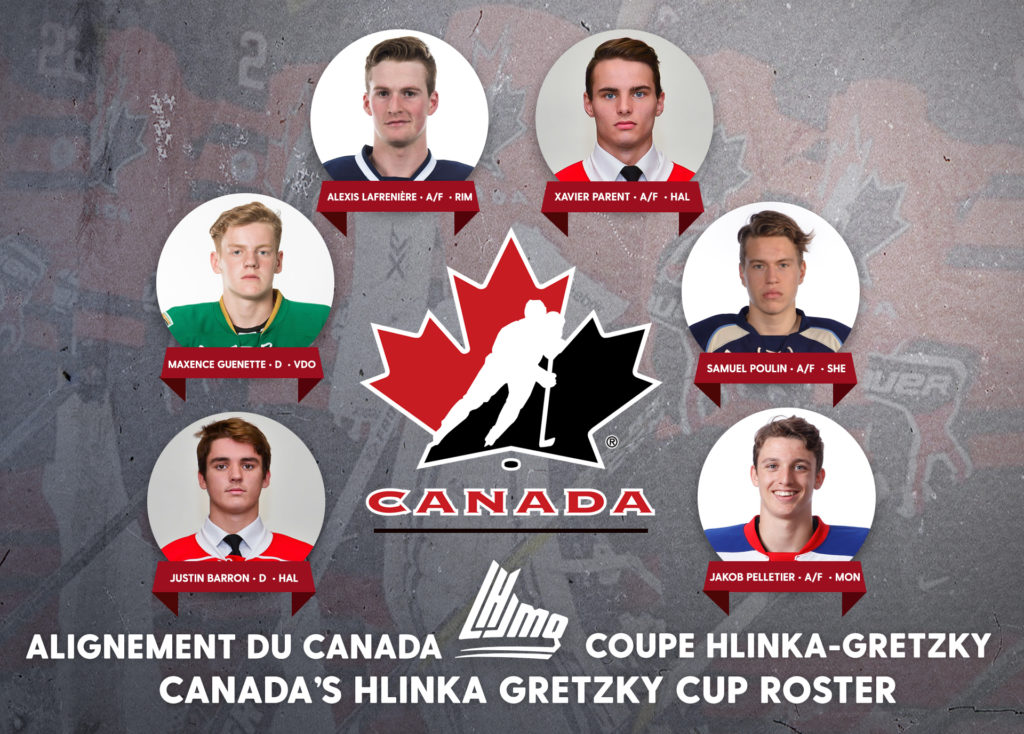 CALGARY, Alta. – Twenty-two of the nation’s best under-18 players have earned the opportunity to represent their country on home ice at the 2018 Hlinka Gretzky Cup in Edmonton and Red Deer, Alta. from August 6 to 11.

Hockey Canada finalized its roster on Wednesday following a five-day selection camp that saw 44 players take part in on- and off-ice sessions, including three intrasquad games, at WinSport’s Markin MacPhail Centre in Calgary.

“We had an incredibly busy but successful selection camp with 44 players who worked hard and made our decisions very difficult,” said Brad McEwen, Hockey Canada’s head scout for men’s teams, of the process to get to the final 22-player roster.

Team Canada consists of two goaltenders, seven defencemen, and 13 forwards, including three players who were part of Canada’s National Men’s Under-18 Team that competed at the 2018 IIHF U18 World Championship in Russia last April, including Rimouski Océanic phenom Alexis Lafrenière.

The selections were made by the team management group, which includes Shawn Bullock, director of national men’s teams at Hockey Canada, as well as McEwen, and Alan Millar, the Under-18 team’s Program of Excellence lead.

“The players who will wear the Maple Leaf at the Hlinka Gretzky Cup are highly-skilled and fast; this will be some very entertaining hockey for fans in the building and those tuning in,” said Millar. “We’re looking forward to a great tournament on home ice.”

Canada’s National Men’s Under-18 Team will play the Czech Republic in pre-competition action on Saturday, Aug. 4, at the new Servus Arena in Red Deer before moving on to Edmonton, where they open the Hlinka Gretzky Cup against Switzerland on Monday, Aug. 6, at 9 p.m. ET. All tournament games played in Edmonton’s Rogers Place will be broadcast by TSN and RDS; check local listings for details.

Newly rebranded as the Hlinka Gretzky Cup, the annual tournament is one of the only true, best-on-best competitions.

Canada won last year’s edition of the event in Breclav, Czech Republic, besting the host team 4-1, with a squad that included 18 players who were selected in the 2018 NHL Entry Draft in June. When all of the picks were in, 77 alumni of the event were selected by NHL Clubs – 19 first-rounders, in fact – including seven of the top-10 picks.

Canada has won gold 21 times in 27 years of summer Under-18 competition.