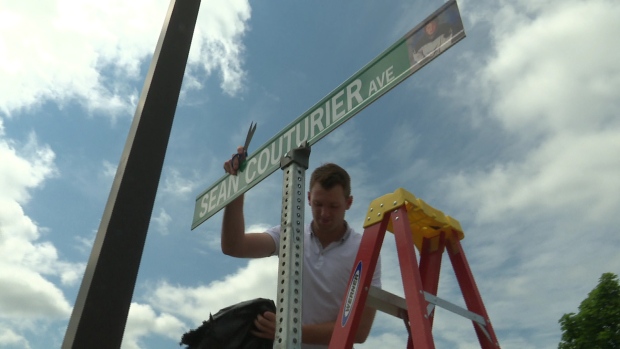 Bathurst, NB – Today was the big day at the K.C. Irving Regional Centre, as the facility transitioned to its new civic address, that of “14 Sean Couturier Avenue”. And to mark the occasion, an unveiling ceremony was held, with the Philadelphia Flyers player of course, but also with a number of special guests.

Indeed, one after the other, M. Paolo Fongemie, mayor of the city of Bathurst, and M. Luc Foulem, Director of the Baie des Chaleurs Minor Hockey Association, addressed the crowd with a pair of dialogs rich in congratulations and memories.

The ceremony concluded with the unveiling of the street sign and a word of thanks from Sean Couturier.

The spectacular street blade will surely make the region proud for a long time, as it not only indicates the name of the avenue, but also contains a picture of the star player on both sides, one taken during his minor hockey years, while the other is in the professional ranks.

Furthermore, one of the two signs was placed at the bottom of the digital sign at the K.C. Irving Regional Centre entrance. A giant sized sign, it measures just below eight feet in length and will be an impressive visual pride for the residents of the region.

The Acadie-Bathurst Titan also seized the occasion to unveil the identity of their new captain. And as fans were anticipating, Jeffrey Viel will be the next Titan player to wear the “C” on his jersey. The six feet tall forward had an impressive 2015-16 campaign, scoring 33 goals and adding 23 assists in 66 games, all the while adding 132 minutes in penalties.

However, it is most likely Viel’s five game winning goals that define his season best, as Viel was able to be at his best when his best was needed.

The Titan wished to thank all the participants which made the event a success. Indeed, the participation of active players such as Vladimir Kuznetsov, Christophe Boivin, Samuel L’Italien, Félix Boivin, Cole Rafuse and Nicolas Dumulong, as well as alumni members Éric Faille and Antoine Tardif and new Titan skaters Olivier Desjardins, Noah Dobson, Mathieu Blanchard and Igor Galygin all helped make the event even more memorable.

And finally, a big thank you to all the fans whom came to the Titan Foundation Golf Tournament, the unveiling of the avenue, or both, without whom, neither event would have been a success.