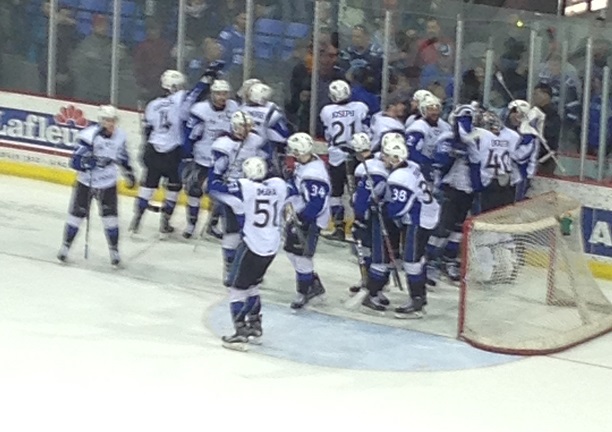 CHICOUTIMI – Bokondji Imama’s goal with just over five minutes remaining in the third period proved to be the winner, as the Saint John Sea Dogs came from behind to defeat the Chicoutimi Sagueneens, 6-5, in Game 6 of the President Cup semifinal, Sunday at Centre Georges-Vezina.

The Sea Dogs have advanced to President Cup Final for the fourth time in franchise history.

Thomas Chabot and Jakub Zboril finished the game with a goal and two assists each while Joe Veleno, Julien Gauthier and Samuel Dove-McFalls also found the net.

Frederic Allard and Joey Ratelle had two goals apiece for Chicoutimi while Dmitry Zhukenov added one.

Allard opened the scoring with a power play goal more than ten minutes into the game, a long slap shot from near the right point that beat goalie Callum Booth on his blocker side.

Ratelle doubled the Sagueneens’ lead two-and-a-half minutes later, taking a pass from behind the goal line on the left side of the low slot, and blasting a one-timer past Booth’s glove.

But Veleno got Saint John back within one with under two minutes left in the frame.

Zboril carried the puck up the left side of his own zone and attempted a pass that deflected into the middle of the neutral zone. Veleno broke away and deked to his forehand, beating netminder Julio Billia past his right leg.

Saint John evened the score 24 seconds into the second period as the teams skated 4-on-4.

Mathieu Joseph stole a pass in the right wing corner and saw Zboril sneaking in from the left point. The Czech blueliner whipped a wrist shot past a sprawling Billia and into an open cage.

Gauthier gave the Sea Dogs the lead with a power play strike late in the period.

Captain Spencer Smallman took a pass at the left point and sent a quick feed to Gauthier in the middle of the slot. The big winger steered the puck just inside the left post to make it 3-2.

The Sagueneens took momentum back early in the third period.

Zhukenov gave Chicoutimi the lead a minute later, taking a pass in front of Booth’s crease and using a deke to beat him on his blocker side.

It became a 5-3 game past the four-minute mark when Ratelle was alone off the right side of the crease for a one-timer past Booth’s glove and a power play goal.

Past the eight-minute mark, Imama fed a pass from the left corner to Chabot in the high slot. The QMJHL’s top defenceman sent a one-timer past the glove of Billia.

Two minutes later, the blueliner led a 2-on-1 on the right side. Chabot fed a pass to Dove-McFalls who buried his second chance to tie the game, 5-5.

Joseph carried the puck down the left wing and saw Imama trailing on the right side. The overage winger whistled a heavy wrist shot past Billia’s glove.

The victory gives Saint John a berth in the President Cup Final for the fourth time, their first appearance since 2012.

Booth made 16 saves for the win. Billia turned aside 28 stops in the loss.

The Sagueneens recognized their three graduating 20-year-olds with the three stars: Billia, Ratelle and Antoine Marcoux.

Game 1 of the President Cup Final is Friday, May 5th, at 7 p.m. at Harbour Station. Tickets are available now online, and at the Harbour Station Box Office during regular business hours.