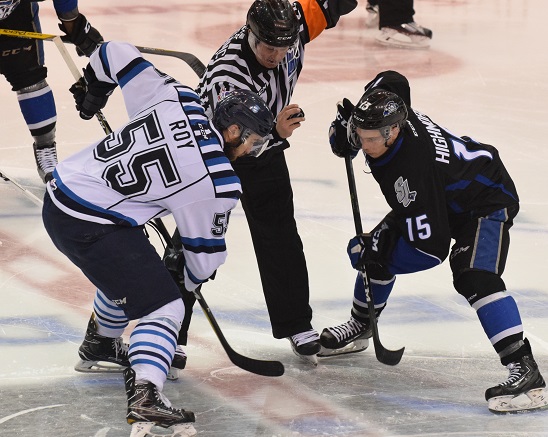 Joey Ratelle scored twice for Chicoutimi while Julio Billia made 52 saves in goal.

Julien Gauthier and Matthew Highmore countered for Saint John with Callum Booth turning aside 51 shots in the Sea Dogs’ first loss of the 2017 playoffs.

Saint John opened the scoring nearly 13 minutes into the game.

Spencer Smallman blocked a shot near his own blueline and carried the puck down the right wing on a 2-on-1. He found Gauthier in the left circle with a cross-ice pass. The 2016 first-round selection of the Carolina Hurricanes ripped a snap shot past a helpless Billia. It gave Gauthier goals in five consecutive games.

Mathieu Joseph rifled a quick wrist shot from the slot that went off Billia’s glove and dropped in front of the goal. Highmore potted the rebound.

The Sagueneens carried play in early in the second period and were rewarded with a power play goal.

A shot from the left circle deflected off the right post and bounced into the crease. Ratelle tapped the loose puck into an empty net before Booth could find it.

The visitors tied the game with another power play goal with fewer than five minutes left in the third.

A Dmitry Zhukenov pass from the left circle deflected over to the right side near the goal line, bounced off Ratelle’s leg and rolled inside the left post. The play was reviewed to see if the puck had been kicked into the net, but the goal stood, creating the need for overtime.

The Sea Dogs outshot the Sagueneens 19-11 in the first overtime period. Saint John’s best chance to score came with about two minutes remaining when Bokondji Imama was found wide open on the left wing side. The overager snapped a quick wrist shot that Billia denied with his blocker.

The winning goal came during another Chicoutimi power play early in the second overtime.

Roy received a pass near the left side of the crease, spun to the front of the net and slipped the puck through Booth’s legs.

Roy was named first star with the game-winning goal and an assist. Booth and Billia took second and third stars, respectively, in front of 4,825 fans in attendance.

Saint John’s next home playoff game will be Game 5 on Friday, April 28th, at 7 p.m. at Harbour Station. Tickets are available now online, and at the Harbour Station Box Office during regular business hours.