Sea Dogs poised to take the next step 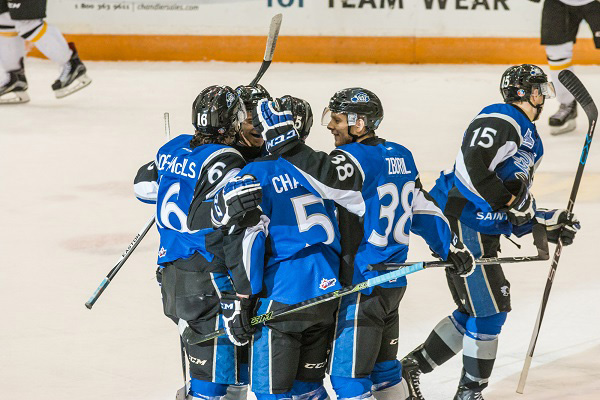 The pieces are in place for the Saint John Sea Dogs to make a championship run, but head coach Danny Flynn is taking nothing for granted.

“Games are won on the ice, not in the media room,” the veteran bench boss said. “There’s a big difference between assembling talent and assembling a team. We have to take the group we have and build a team, and that’s one of the great challenges of junior hockey. Your roster is always changing significantly from year to year. As we get guys back (from NHL camps) and see who we’re actually going to have for the year, it’s exciting to look at the lineup and start to try to build a team.”

The Sea Dogs saw last year’s playoff run end with a semifinal setback to the Shawinigan Cataractes. But the experience could be a catalyst for the Port City squad as it prepares for a promising 2016-17 season.

“This year is supposed to be the year for us,” said sophomore forward Joe Veleno, who debuted as a 15-year-old last season as the first player to be granted exceptional status in the QMJHL. “All the guys are looking forward to it and have high expectations for the team. It’s going to be exciting and it’s going to be fun to watch. When you look at the guys coming back, it’s exciting.”

Veleno’s rookie season was a resounding success. He notched 43 points in 62 regular-season games and scored six goals in 17 playoff contests.

He benefited from the guidance of a strong veteran core, many of whom will return for the current campaign. How many return remains to be seen.

“The chance to have a good nucleus back certainly excites us, but we’re not going to start counting heads until we see them walk through the door,” Flynn said. “We still have a number of guys who might have the opportunity to stick in pro, whether it’s our 20-year-olds at camp or some NHL-contracted players.”

Joseph enjoyed a breakout season, piling up 73 points before scoring five goals in as many playoff games. A calf injury ended his post-season, but the speed demon was part of a deadly line with Highmore and Daniel Del Paggio.

Noel, Smallman, Dove-McFalls and Imama add to the team’s experience up front, while Kyle Ward and Cole Reginato provide a physical edge. Former OHLers John Warren and Zach Grzelewski are both capable of making strong contributions, while 2015 first-rounder Cedric Pare is poised for his first full QMJHL season.

“We have a really good group,” Del Paggio said. “Everyone is a year older and the expectations are really high. I think with the experience we have in this room, we can handle the challenge. I think the expectations will help us excel this year.”

While decisions involving NHL teams could impact the back end, the defence corps looks loaded. Zboril is listed as Boston’s top prospect in The Hockey News Yearbook, while Chabot is third on Ottawa’s list.

Green made enough progress last year to get drafted in the third round. Webster is the resident shutdown specialist and Felixson is intent on applying lessons learned from his rookie season.

“Expectations are high and everyone knows that,” Green said. “The main core is back and that’s what’s really exciting. We have that playoff experience and everyone is excited. It should be a long, fun year.”

The goaltending is in the hands of Alex Bishop and 2015 first-rounder Alex D’Orio. Bishop, last year’s backup to Marc-Antoine Turcotte, was solid down the stretch last season before earning some playoff duty.

“I think he learned a lot about himself and about what it takes to win in this league while being part of a good playoff run,” Flynn said of Bishop. “It was really exciting last year to see the team development and grow, and come together down the stretch in the second half. We become a very close-knit team as we fought through a lot of adversity and built our team.”

Flynn, who coached the Moncton Wildcats to a QMJHL title in 2010, said championship teams are tied together by a common thread: “great people.”

“A lot of those guys (from Moncton’s 2010 team) went on to play in the NHL, but there’s also guys that are outstanding professionals,” the coach said. “You see how well they’ve done in life after hockey and it makes you smile. Whenever a team wins a championship and people talk to the players, they don’t talk about the power play being good or the D-zone coverage being good. They all invariably say we had a great group of guys.

“That’s just a fundamental building block if you’re going to win. It’s so hard to win if you don’t have a tight-knit group of players that want to win for each other. If you’re going to win with a divided team, you better have the best team by far.”