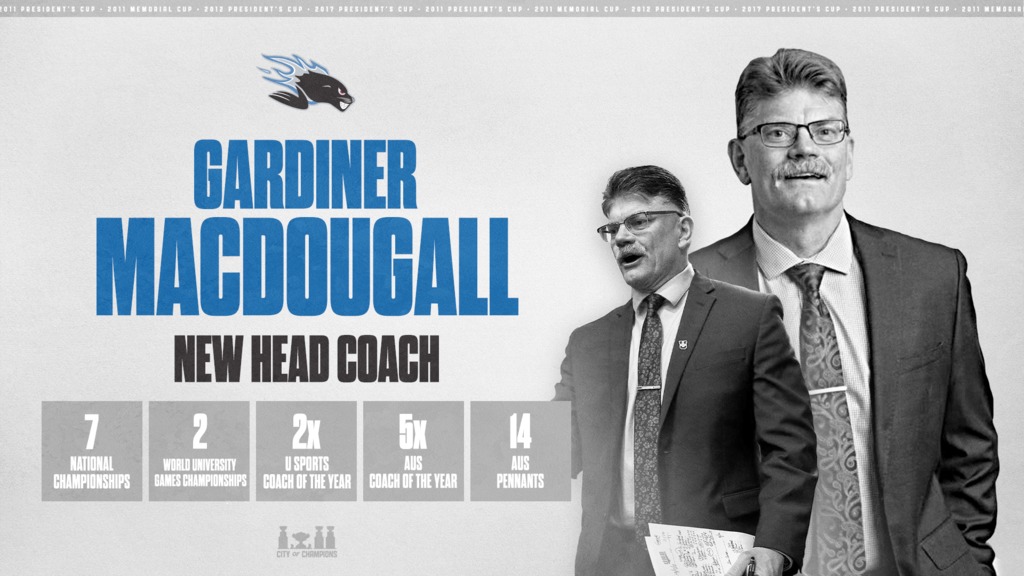 In preparation for the 2022 Memorial Cup tournament, the Saint John Sea Dogs have named Gardiner MacDougall their new head coach.

MacDougall brings extensive national tournament experience and success. A staple of the hockey community in New Brunswick, he is one of the winningest coaches in Canadian University Sports (U SPORTS) history. He has lead the University of New Brunswick’s (UNB) Men’s Hockey program to be one of the most dominant in the country since joining in 2000.

“This is a tremendous opportunity and challenge to help make a difference” said MacDougall. “It’s an opportunity to help and be part of something special for the Sea Dogs, the city of Saint John, and the province of New Brunswick.”

“After our upset loss in the first round, we took a step back and saw a need to support our players and staff differently in preparing for, and competing in the Memorial Cup tournament” said Sea Dogs President & General Manager, Trevor Georgie. “We identified a small group of winning coaches with experience having won tournaments. There are no active coaches in Canada that have prepared teams for and won more tournaments than Gardiner. He’s a motivator and has coached in high pressure situations.”

MacDougall will prepare and coach the Sea Dogs until the end of the Memorial Cup tournament and will then return to his full-time post as Head Coach of UNB.

The Sea Dogs have also added former San Jose Sharks Associate Coach Rocky Thompson as Memorial Cup Advisor. Thompson was the Head Coach of the Memorial Cup host Windsor Spitfires in 2017. As hosts, Thompson’s Spitfires were eliminated in the first round of the OHL Playoffs but went on to win the Memorial Cup tournament. Thompson played professional hockey for ten years, including three seasons with the Saint John Flames (AHL).

“Rocky has lived through what we’re currently living through” said Georgie. “He prepared and led the Spitfires to a Memorial Cup and that experience is invaluable. He is smart, passionate and wants to contribute in a meaningful way. He wants to win and we hope to accomplish what he did as host in 2017.”

With these changes, Head Coach Gordie Dwyer has been relieved of his coaching duties.