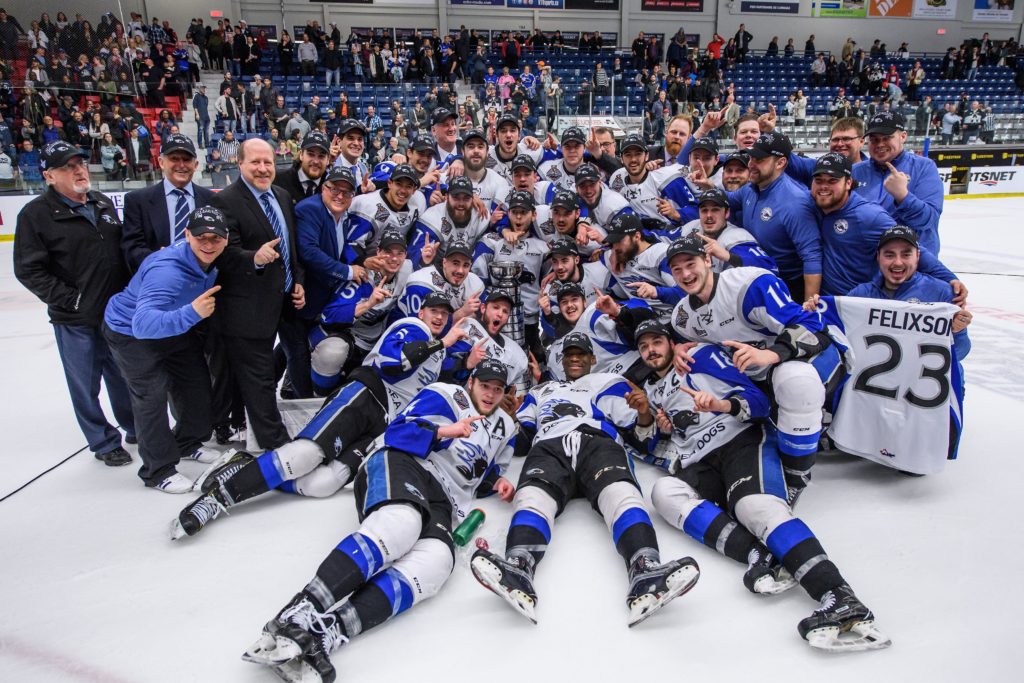 BOISBRIAND, QC – The Saint John Seadogs defeated the Blainville-Boisbriand Armada 5-1 to complete their four-game sweep and win the President’s Cup as QMJHL champions for the third time in seven seasons.

The Sea Dogs continued their dominant run through the postseason, improving to 16-2 this spring and will now head to the Memorial Cup in Windsor as the QMJHL representative beginning on May 19.

The Sea Dogs opened the scoring at the 7:29 mark of the first period when Bokondji Imama notched his eighth goal of the playoff on nifty setup from Matthew Highmore and Mathieu Joseph. Saint John doubled their lead 10 minutes later as Highmore and Joseph teamed up again this time setting up Spencer Smallman for a wide open net on the power play.

Coming off two straight shutout losses over to the Sea Dogs in Games 2 and 3, the Armada finally solved goalie Callum Booth when Pierre-Luc Dubois beat him up high with a wrist shot to make 2-1 on a beauty of a goal from Yvan Mongo and Alex Barret-Boulet.

With the Armada pressing for the equalizer, the Sea Dogs silenced a sold-out crowd of 3,500 at the Centre d’excellence Sports Rousseau when Simon Bourque restored a two-goal cushion for Saint John with under five minutes left in the second.

Smallman then added his second goal and third point of the night when he made it 4-1 on a 5-on-3 power play in the third period. Highmore then capped the scoring with his sixth of the playoffs late in the third.

“This is a great group of kids and a team that has big hearts and lots of skill,” said head coach Danny Flynn after the win. “We’re not finished just yet.”

Winner of the Guy Lafleur Trophy as playoff MVP, defenceman Thomas Chabot was a force throughout the playoffs. Logging an eye-popping average of 35 minutes per game, Chabot amassed five goals and 23 points in 18 playoff games.

A first-round pick of the Ottawa Senators in 2015, Chabot becomes only the fourth defenceman to ever win QMJHL playoff MVP honours, and first in the last 15 years, joining Victoriaville’s Danny Groulx (2002), Granby’s Jason Doig (1996) and Hull’s Sylvain Cote (1986).

Equally as dominant was Booth who had scintillating President’s Cup Final where he posted two shutouts, including a shutout streak that spanned an amazing 177 minutes while allowing only four goals in the series.

The Montreal native boasted a 1.67 goals against average and .923 save percentage in the QMJHL playoffs. A fourth round pick of the Carolina Hurricanes at the 2015 NHL Draft, Booth was acquired by the Sea Dogs from the Quebec Remparts in December in a shrewd move by the team president/GM Trevor Georgie that has paid huge dividends for the Sea Dogs.

This year marked the Armada’s first President’s Cup Final appearance for a team which has yet to miss the QMJHL playoffs since joining the League in 2011-12.

The Sea Dogs will now look to add a second Memorial Cup banner to the rafters at Harbour Station, joining the one won by Huberdeau’s Sea Dogs in 2011.

Saint John is also gunning to become the first QMJHL representatives to win the Mastercard Memorial Cup since Halifax accomplished the feat in 2013.

The action will get underway on May 19, at 7:00 p.m. at the WFCU Centre in Windsor live on TVA Sports and Sportsnet.