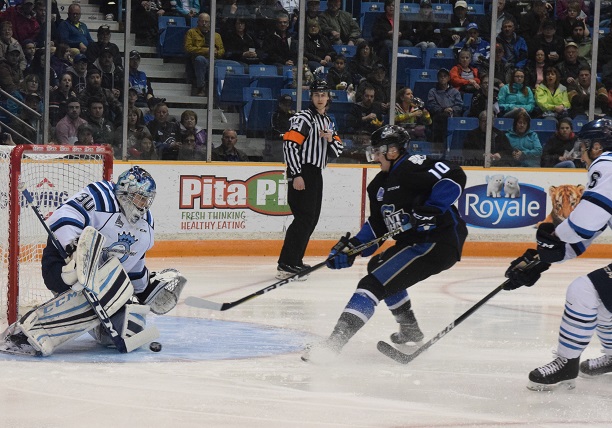 SAINT JOHN – Nathan Noel and Thomas Chabot tallied a goal and an assist each and Callum Booth made 23 stops to lead the Saint John Sea Dogs to a 4-0 victory over the Chicoutimi Sagueneens in Game 5 of the President Cup semifinals, Friday at Harbour Station.

Zboril got the game’s opening goal with under seven minutes remaining in the second period following extended pressure in the Sagueneens’ zone.

Saint John won a puck battle in the right corner and got the puck back to the Czech blueliner, who crushed a slap shot past the blocker of a screened Julio Billia in the Chicoutimi goal.

Chabot grabbed the puck on the right side, near the top of the circle, and found Noel near the left faceoff dot. The St. John’s-native, who agreed to an NHL contract yesterday with the Chicago Blackhawks, one-timed the feed into a wide open cage. The goal snapped a 17-game goalless drought dating back to early March.

The Sea Dogs pushed their advantage to 3-0 before the six-minute mark in the third.

Chabot picked up the puck behind his own net, weaved through the neutral zone and attempted to sneak past two Chicoutimi defenders for a chance alone. The 2015 Ottawa Senators’ first-rounder lost control of the puck before he could get a shot, but grabbed it again, moved into the right circle and rifled a wrist shot that got past Billia’s glove on the short side.

Veleno rounded out the scoring halfway through the period.

The 16-year-old centre joined an offensive rush as a trailing forward in the middle of the ice. He took a Julien Gauthier pass from the right circle into the middle of the slot and ripped a wrister beyond the glove of Billia.

Booth was named third star after earning his second shutout of the series. Billia took the loss despite 48 saves.

Noel’s two points made him first star. Chabot got second star with his goal, assist and eight shots in front of 5,189 fans in attendance.