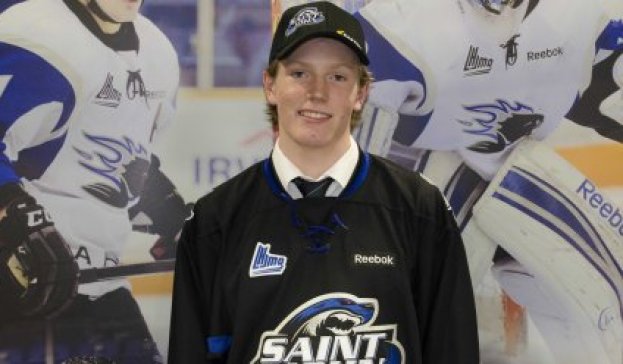 SAINT JOHN, NB – The Saint John Sea Dogs drafted a defenceman with their 17th overall pick in the 2013 Quebec Major Junior Hockey League Entry Draft. Will Thompson was what the brass were looking for in the rebuilding phase of the franchise.

A solid two-way defenceman that can skate and move the puck, the Fredericton, NB native never liked being away from home. After moving away from home to play hockey at the Ontario Hockey Academy, the young d-man made the decision to come back.

“I was in Ontario the year before, at the OHA, and I kinda missed home a bit,” said Thompson. “Then I heard about RNS and they were interested and only an hour away from home, so I figured I might as well give it a try.”

While attending RNS and playing on the school’s hockey team, Thompson became close friends with Jordan Boyd, a Halifax, NS player drafted in the 4th round of this years QMJHL draft by the Acadie-Bathurst Titan. Both players were slated to start training camps in August.

Tragedy struck the Titan training camp as Boyd took ill on the ice while participating in a regular skating drill and collapsed. Despite several attempts, he could not be revived. The hockey world lost a great personality far too early, and Thompson lost a great friend.

Showing true dedication and fortitude, Thompson showed up on the first day of Sea Dogs training camp and took part in physical evaluations just days after the incident. Staying for on-ice sessions as well before taking the weekend off, Thompson showed great dedication despite being off his game.

Slowly but surely, focusing on hockey and his game is helping to soothe his loss. He knows he has a team behind him.

“It’s a big help,” said Thompson. “They welcomed me in here pretty well and they knew I was going through a rough time, so they have all been pretty nice. They’ve been good distractions. The first few practices, I felt I wasn’t all there. Yesterday though, I felt really good and my legs felt good.”

Thompson is in a good place though, with same-minded people and caring teammates. Some of his favourite things are accepted team-wide, country music in particular:

Pump-up song: Whatever is in the dressing room

Thompson still has his work cut out for him with training camp not over yet. The Sea Dogs get back into pre-season action tomorrow night against the Titan at 7 p.m. at Harbour Station. Tickets are available at the Harbour Station box office, by calling 657-1234 or visiting tickets.harbourstation.ca.