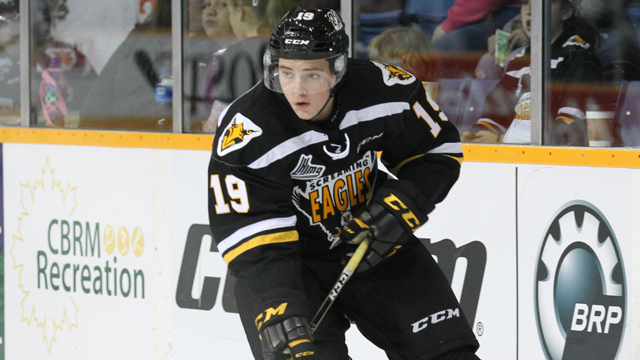 Toronto, ON – The Canadian Hockey League today announced that Ottawa Senators prospect Drake Batherson of the Cape Breton Screaming Eagles is the CHL Player of the Week for the week ending October 22 after recording 10 points in three games including seven goals and three assists with a plus-minus rating of plus-2.

Batherson recorded a trio of multi-point performances last week extending his personal point-streak to 13 games and helping the Screaming Eagles earn five of a possible six points.  The QMJHL’s leading scorer began his week on Wednesday with two goals including the overtime winner earning first star honours in a 4-3 victory over the Chicoutimi Sagueneens.  His week continued Thursday by recording a career-high two goals and two assists where he was named third star despite a 7-6 overtime loss to the Shawinigan Cataractes.  Batherson’s week wrapped up with a second straight four-point effort on Sunday tallying his first career hat-trick which included another overtime winner as first star of a 6-5 triumph over the Saint John Sea Dogs.

A 19-year-old from Fort Wayne, Indiana, Batherson is playing in his third season with Cape Breton after being selected in the sixth round of the 2015 QMJHL Entry Draft.  He currently leads the QMJHL with 24 points including 15 goals and nine assists in 13 games and is quickly approaching his 2016-17 marks of 22 goals and 36 assists for 58 points in 61 games.  Batherson was a fourth round pick by the Senators in the 2017 NHL Draft and recently signed his entry level contract with the club in October.