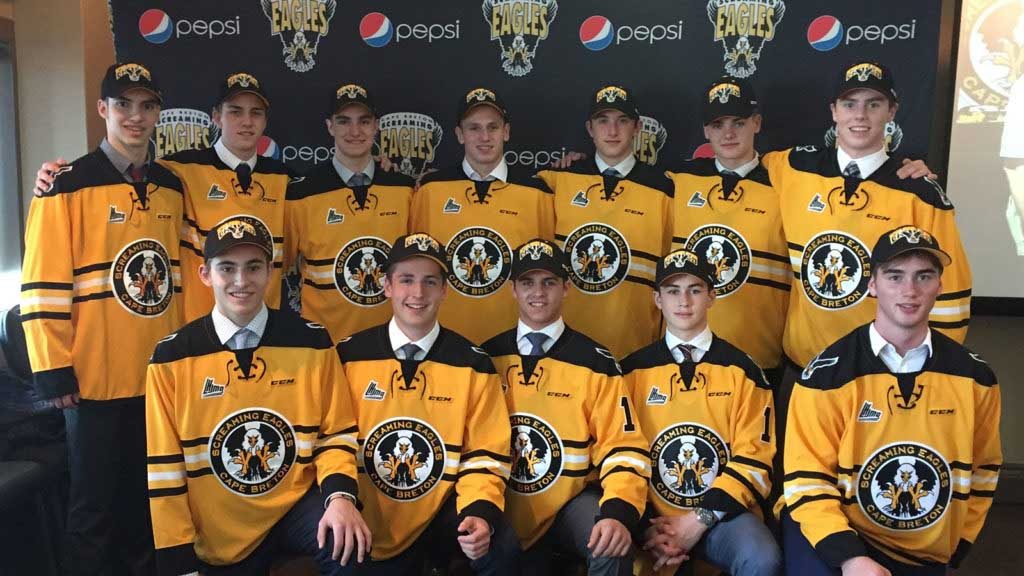 As all 18 of the QMJHL’s teams cascaded upon Saint John for the league’s annual entry draft, the Cape Breton Screaming Eagles were active in the opening round- of both 2017 and beyond.

Two first round selections highlighted Cape Breton’s draft which saw the Screaming Eagles select fifteen players- ten forwards, four defensemen, and one goaltender. With back to back picks, the Eagles chose defenseman Noah Laaouan at #14 and centre Brooklyn Kalmikov at #15. Cape Breton also swung a major deal, moving goaltender Colten Ellis (2000-10-05) to the Rimouski Océanic in exchange for Sherbrooke’s first round choice in 2018. Ellis was originally picked in the fourth round at pick #59, in 2016 by Cape Breton, and would appear in three games with the Screaming Eagles with a 2.50 goals against average and an 885 save percentage.

Laaouan is a Nova Scotia native, just the second bluenoser taken in Saturday’s draft, and skated with the Dartmouth Steele Subaru midget club last year. The 5’10, 155 pound blueliner collected 27 points in 38 games last season and was named to the all-rookie team in the Nova Scotian major midget loop. The next pick of the draft, Kalmikov, stands 5’11, 146, and skated with Collège Esther-Blondin in 2016-17. It was there that Kalmikov, whose father Konstantin played with the AHL’s St. John’s Maple Leafs, notched 22 points in 40 games, including 16 goals.

Another trade would mean Cape Breton would pick with even greater frequency in round two. The Screaming Eagles held three selections after the Chicoutimi Saguenéens sent pick #36 to Cape Breton. The pick was moved as compensation after the Eagles acquired the rights to Alexandre Ranger prior to the 2015-16 season, but Ranger would crack the pro ranks and split that year between the ECHL & AHL. With three selections in 2017’s second round, Cape Breton would choose a pair of centremen- Ryan Francis (at #21) and Antoine Rochon (pick 27)- along with goaltender Tommy DaSilva with the 36th selection.

Francis was named the 2016-17 rookie of the year in the Nova Scotia major midget league, producing 51 points in 37 games while the 5’7 , 150 pound forward skated for Cole Harbour. Rochon (5’10, 166), played for St-Eustache in the Québec midget AAA league and produced 31 points over 40 contests. The 6’2, 196 DaSilva was the first goaltender chosen in the draft, following a season with Collège Charles-Lemoyne in Québec midget AAA where he posted a save percentage of 910 and a goals against average of 2.67 through 28 outings.

A series of deals would alter the Eagles’ draft position in the fourth round of the 2017 draft and the third round in 2018. Cape Breton now holds Gatineau’s pick in place of its own in round three in 2018 and chose at #68 in round four on Saturday (originally belonging to Bathurst). In round three Cape Breton tabbed winger Ludovic Lefrancois (at #54) before choosing forward Mikael Martel in round four and defenseman Phillippe Casault in the fifth round with the 85th choice.

Lefrancois (5’10, 171) skated with Collège Notre-Dame of the Québec midget AAA ranks in 2016-17 where he notched 17 points in 38 games. The 6′ 170 pound Martel spent the bulk of last season in midget espoir with Gatineau where he scored four goals in 21 outings. Casault, who stands at 5’10 and 148 pounds, was teammates with Francis last season and collected six assists from the blueline.

The Screaming Eagles were next at the microphone in round eight. With the 139th pick Cape Breton tabbed 5’10, 156 pound Saint-Eustache winger Gabriel Choiniere who recorded ten points in 39 games in 2016-17. At #157 in round nine the Eagles called the name of defenseman Nicholas Yuill (6′, 167), who collected ten points in 33 games in 2016-17 playing with Halifax in the Nova Scotia major midget loop.

Each QMJHL team is required to make at least two USA selections during every entry draft, and Cape Breton did so with defenseman Michael Kennedy (round 12, pick 211) and Jacob Banks (round 14, 245). Kennedy, the lone 2000 born player selected by the Eagles, is 6’1 and 174 pounds and scored 27 points in 29 games from the blueline with Northfield/Mt. Herman prep school. Banks, a 5’10, 165 pound centreman produced 23 points in 40 contests with the Boston Junior Bruins. Sandwiched between the two USA selections, Jeremy Talbot was acquired with pick 171 in round 13. Talbot (6’1, 171) notched 14 points in 29 games with College Antoine-Girouard in Québec’s midget espoir ranks.

In August the newcomers will get their chance to shine as the Screaming Eagles will commence with training camp for the 2017-18 campaign and begin action with an exhibition contest on August 23rd. The Eagles staff will now turn its attention to the CHL Import Draft on June 27th where the team has the option to make two import selections- however currently Cape Breton’s import positions are filled with 20 year old forward Vasily Glotov and 18 year old defenseman Leon Gawanke. The 2018 entry draft is still over a year away, but the Eagles have already secured several options, holding 19 draft picks including two in round one.