Samuel Asselin: On the road to glory again

titan Mooseheads
by
Will MacLaren 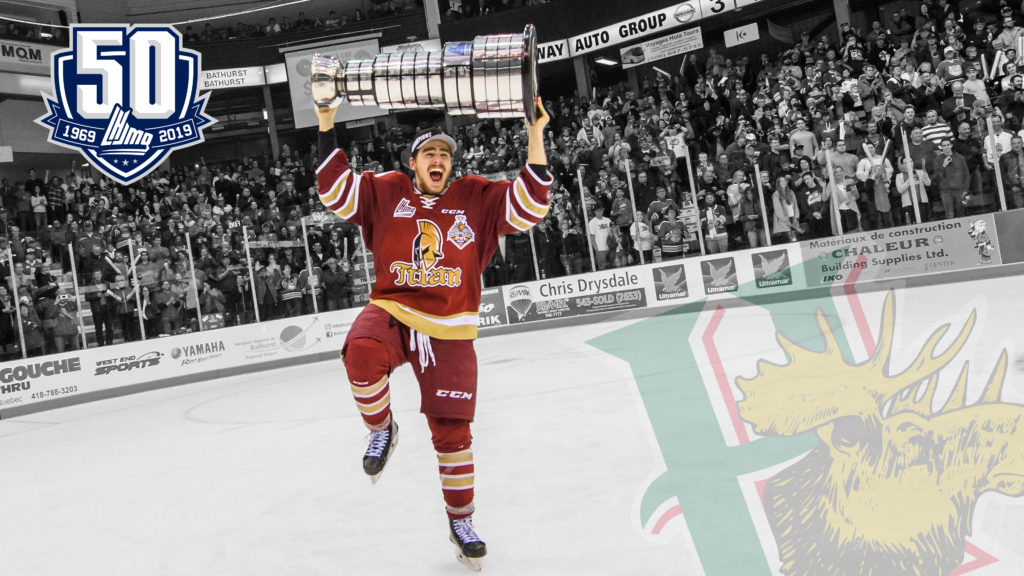 For Samuel Asselin, it was a road he was familiar with.

On Friday September 21st, less than 24 hours after the Memorial Cup banner he helped earn as a member of the Acadie-Bathurst Titan rose to the rafters of the KC Irving Regional Center, he was making his way from the northern area of the province to the south. This after receiving a call from his General Manager, Sylvain Couturier.

“I kind of knew something was going to happen”, Asselin said. “On Friday morning I checked my phone and there were five missed calls from [Couturier]. At that point, I knew for sure.”

What the 20-year-old from l’Assomption, Quebec knew was that he had been traded. For the gritty, two-way center, who was acquired by Acadie-Bathurst from the Shawinigan Cataractes on January 3rd, it was his second trade in the calendar year.

And so, it was down the road to Sackville, New Brunswick to meet the bus of his new team. That new team is the Halifax Mooseheads, host squad for the 2019 Memorial Cup.

For Asselin, going from rebuilding club to championship contender for the second time in 2018 had a different element than the first experience.

“Last time was more surprising”, Asselin explained. “This time I knew it was probably going to happen, I just didn’t know when. Last time I didn’t [expect it] at all. After going through it once, you know what it’s like. It prepares you. It was kind of like deja-vu.”

What’s no longer surprising is the brand of hockey Asselin brings to the Moose. After tying for the tournament lead with five goals, including the insurance marker in the championship game, he was named to the Memorial Cup All-Star Team. This on the heels of an 11-point performance in the 2018 President Cup Playoffs for the Titan.

It’s exactly the type of experience Mooseheads’ General Manager Cam Russell was eager to bring into his fold.

“He’s such a complete player,” Russell noted. “He’s a competitor. He brings a level of skill that I think is underrated. He plays big in big games and provides great leadership. To add Samuel to the mix was important for us.”

Asselin hopes the experience he brings from his championship run in Northern New Brunswick serves his teammates well. That experience has already taught him that there’s more to winning it all than what the casual observer may notice.

“If you want to win, you need a strong room”, he observed. “You need to know what it takes to keep playing into [late] May. You need the discipline to keep going at that time of year, to keep working, training and eating right even though it’s very late in the year. I hope to be there for the boys and bring some of that experience and leadership to the [Mooseheads] room.”

Joining him in the room are a pair of familiar faces in forwards Antoine Morand and Jordan Maher. All three lifted the 100th Memorial Cup with the Titan in Regina, Saskatchewan last May.

“It’s pretty crazy to think about it”, Asselin remarked. “Whenever you win with someone like that, you always have respect for them. I played on Jordan’s line last spring and [Morand is] one of my best friends.”

Of course, the road to victory will be long for the Mooseheads, as it is for all teams. This particular road won’t lead to home ice until late October, however. With Scotiabank Center under renovations, the club begins the season on a gruelling 15-game road trip.

As Russell looks at the big picture of this experience, he sees Asselin and his veterans playing a role in making the most out of the situation.

“We will hit adversity”, Russell said. “[The early part of the schedule] will be tough. It’s important to have Samuel and our other leaders keep us on an even keel. We look at our 20-year-olds as an extension of our coaching staff. At the same time, there will be positives and a lot of bonding with this situation. We’re going to find out what our team is really like.”

And so, as Samuel Asselin and his new group of teammates make their way down the road – both literally and figuratively – their intended destination is clear.

“Last season [in Bathurst], we kept telling each other that our goal was to win the last game of the year. This year, the goal is the same in Halifax.”

Samuel Asselin is undoubtedly on the road to glory again.