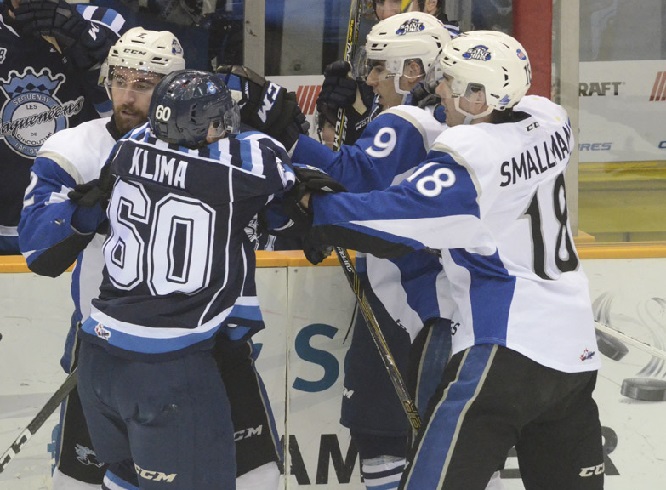 CHICOUTIMI – Overage Joey Ratelle scored with 13.9 seconds left in the third period to give the Chicoutimi Sagueneens a 4-3 victory over the Saint John Sea Dogs in Game 4 of the President Cup semifinals, Wednesday at Centre Georges-Vezina.

Mathieu Joseph potted a pair for Saint John while Bokondji Imama added one.

Chicoutimi generated the game’s first good scoring chance eight minutes into the first period when winger Hamelin took a pass in the neutral zone and created a breakaway. He slapped a shot from the left side that goalie Callum Booth snared with his glove hand.

Bzowey opened the scoring with under seven minutes remaining in the frame, taking a pass on the left side of the slot and using a deke to his left to tuck the puck past a sprawling Booth.

Saint John’s best scoring chance of the period came a few minutes later Spencer Smallman fed a pass into the slot that Julien Gauthier deflected toward the goal. Netminder Julio Billia had it go off of his glove and the Sagueneens’ defence cleared the puck into the corner.

Joseph tied the score with a power play goal four minutes into the second period.

The Tampa Bay Lightning prospect took a pass inside the top of the right circle and whipped a low wrist shot that beat Billia on his stick side.

The Sagueneens regained the lead seven minutes later when Hamelin, providing a screen in front of the net, knocked down a shot from the left point, spun and snapped a shot through the legs of Booth.

Saint John nearly tied the game on a shorthanded 2-on-0 late in the period.

Simon Bourque created a turnover near his own blueline and broke out on the left side, joined by Nathan Noel.

As play progressed toward the net, Bourque fed a cross-crease pass to Noel, but Billia lunged to his left to deny the fourth-year Sea Dog forward.

Hamelin struck again two-and-a-half minutes into the third period, snapping home a loose puck from the left side of the crease after a scramble.

But Imama got that one back 37 seconds later. The Montreal-native, who had two goals in Game 3, took a pass in the right circle and rifled a heavy wrist shot past Billia’s blocker to make it 3-2.

Joseph tied the game shorthanded halfway through the period.

He created a turnover near the bottom of the right circle, grabbed the puck and ripped a quick wrist shot over the glove of a surprised Billia.

Hamelin was injured late in the third period after a collision with Saint John’s Jakub Zboril at the Sea Dogs’ blueline.

The Chicoutimi forward dumped the puck into the Saint John zone from the right side of the blueline, and then tried to jump to avoid a Zboril hit. But as the players collided, Hamelin fell awkwardly and laid flat on his back for several minutes.

He left the ice on a stretcher.

Ratelle netted the winner with 13.9 seconds remaining, sending a long shot from the top of the right circle that deflected off of a Saint John defenceman and under the glove of Booth.

Billia made 30 saves in the win and was named third star. Booth took the loss with 19 stops.

Ratelle was named first star with the game-winning goal. Hamelin got second star with his two goals in front of 4,253 fans in attendance.

Game 5 is Friday, April 28th, at 7 p.m. at Harbour Station. Tickets are available now online, and at the Harbour Station Box Office during regular business hours.