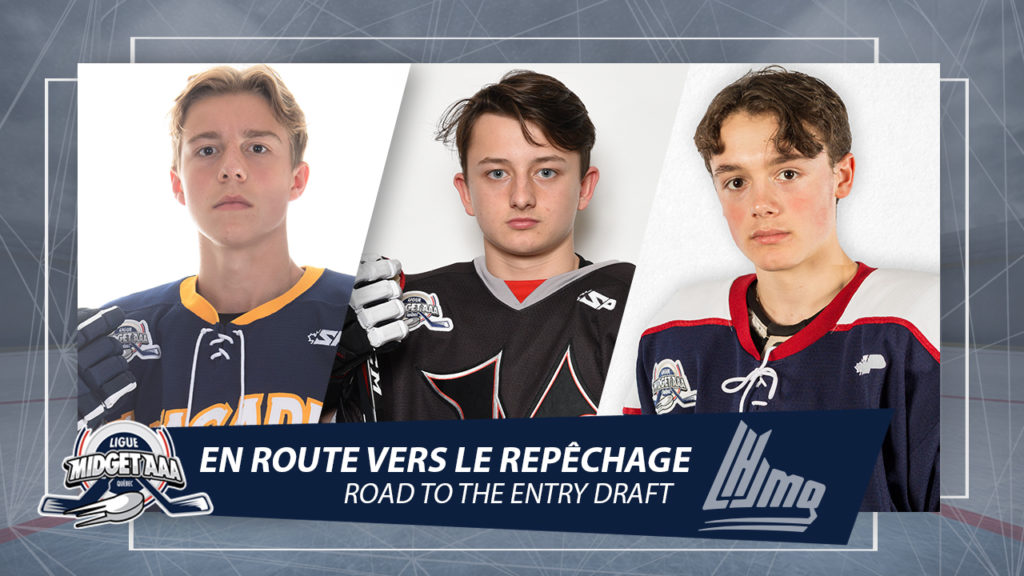 This is something new for me this season, as I’ll have the chance to join the QMJHL team as a collaborator. My goal will be quite simple : help you get to know the different prospects who are turning heads this season ahead of the QMJHL Entry Draft, but also with an eye on the NHL Draft which, might I remind you, will be taking place at Montreal’s Bell Centre.

I’ll have the incredible opportunity of working in direct collaboration with Patrick Desrosiers who, this summer, became the league’s latest Director of Central Scouting (CSR). Each month, I will deliver a list of the best prospects ahead of the QMJHL Draft, as well as the profile of one of those prospects on the list. The same goes for the prospects headed into the next NHL Draft. Four features each month, which I hope will help you get to know the stars of tomorrow a little better.

With that said, here is Patrick Desrosiers’ vision for the 2019-2020 group of prospects that has its sight set on the Q.

“The 2019-2020 class is, up to now, a class of defencemen and will be, from what I’m hearing from certain specialists, a good class of goaltenders”, said Desrosiers. “Forwards are a little slower off the block. Is it the quality of the defenders that are available that is slowing them down? I don’t think so. On offence we don’t have ultra dominant forwards like we had in past seasons. But there are a few who are starting to quietly become something special.”

“In the Maritimes, it also seems like the defensemen are garnering most of the attention in the projections. The season is only kicking off out there, so we’ll have to wait a few weeks to have a clearer picture. One thing that’s certain in today’s hockey is that young players are more athletic, agile and mobile, regardless of size.”

Good things come in small packages. Justin Côté is an extremely confident forward, and it shows in all aspects of his game. Very offensively gifted, he reminds me of Daniel Brière when he wore the Drummondville Voltigeurs colors.

Explosive and agile on his skates with an excellent passing ability, he is extremely mobile for a player of his size. Charbonneau was one of three players who played in the QMAAAHL as a 14-year-old last season.

A defender who’s reliable in every sense of the word, Lamoureux is the kind of candidate who’ll climb the rankings all season long. He has ways to go in terms of offensive ability, but once he gets going, he’ll be a full-blown menace for his opponents.

He was among the rare few 14-year-old athletes in the QMAAAHL last season, and is likely the most complete defender of this group. He’ll need to improve on his physicality and add a little more bite to his game in front of the net. The young prospect already has 10 points in 10 games this season.

Mastrodomenico is a fast skater with powerful explosiveness, making him stand out among teammates and create strong offensive rushes. He will, however, need to learn to temper his offensive impulses.

His hockey sense is his strongest asset, and he has a knack for seeing the play before it develops. On top of being responsible defensively, he is always capable of making himself a passing option the moment his teammates get a hold of the puck. He will need to work on his explosiveness.

A true poison the ice, Sullivan is always dangerous in front of the opponent’s net. He will need to improve his defensive abilities this season.

Vetrano is one of the fastest skaters in the QMAAAHL. He excels in tight spaces and his speed is a major advantage for him. In the offensive zone, he is always one to watch out for, but he will need to work on being more consistent.

Verreault is a very fast skater who always seems to find himself in the right spot in the offensive zone. He possesses an extremely precise shot and is a decent scorer, as shown by his eight-goal total so far this season. Size might be a factor, but his dominance on offence can’t be ignored. He, too, will need to work on consistency.

One of the three players to make it in the QMAAAHL at the age of 14, Warren is a complete defender who seems at ease countering his opponent’s plays. He has an explosive stride for someone of his size. Physically, he is ready for the QMJHL.