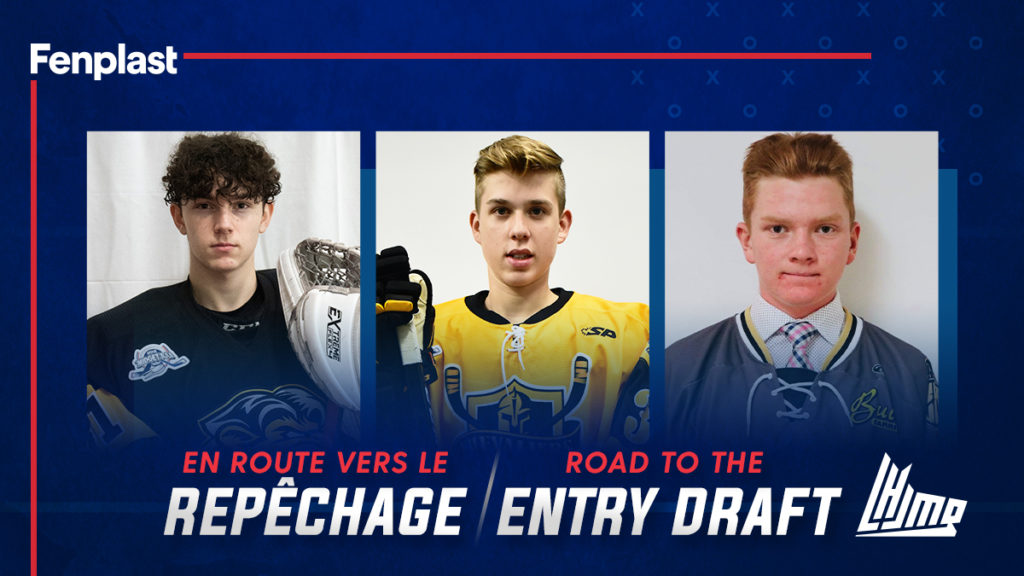 Despite very limited showing due to the exceptional circumstances surrounding the current regular season, some of the QMJHL’s top prospects from Quebec and the Maritimes have been doing their best to catch the attention of regional scouts.

With no particular draft rankings published yet, this month’s prospects are listed in alphabetical order:

Will Allen – Ontario Hockey Academy – LW
Will is a skilled gritty two-way forward that plays a lot bigger than his stature. He possesses great speed and has a great release. The left winger isn’t afraid to go into the high-traffic areas to create time and space for his linemates or to create offence for himself.

Will has great puck skills and vision. He will have to continue get stronger and a little more explosive, but he certainly possesses all the tools to be an effective presence at the next level. – Craig Eagles, CSR Scout, New Brunswick Region

Alexis Bourque – Gatineau Intrépide – RW
A few preseason games were enough for Alexis to make his mark. His good physique coupled with a great work ethic makes him a presence on every shift. He continually takes in information and reacts to give himself space. His feel for the game allows him to dominate despite some technical elements that still need to be fine-tuned. He is young and has time to progress with his skating.

He keeps his feet moving, supports his teammates at all times and is present in traffic, especially near the opposing net. His backchecking and defensive involvement are equally impressive. Alexis has the qualities to become a very good QMJHL player. – Claude Gosselin, CSR Scout, Quebec Region

Jesse Carrière – Châteauguay Grenadiers – LHD
Jesse Carrière is another promising defenceman. A new generation player, he is quick to execute his first pass to give his teammates space and time to generate the attack. He has a powerful shot and provides excellent support offensively. He has all the qualities to stand out on the power play.

Since the beginning of the season, he has been working hard to refine his defensive play to become a more complete player. He knows how to use his body to separate opponents from the puck. Scouts are undoubtedly eager to see him in action again. – Benoît Payment, CSR Scout, Quebec Region

Harry Clements – Charlottetown Knights – LHD
Harry is an all-around defenceman that plays with an edge. He is physically strong and gives solid bodychecks at every opportunity, making his presence felt on the ice. Highly competitive, he rises to the challenge when playing against opposing teams’ best players. He is strong in puck battles and effective at out-muscling opponents around the net.

He is most effective when he passes the puck quickly to open forwards and uses his skating ability to join the rush as a late option. Harry’s defensive awareness, mobility, physical play, and compete level will likely earn him the trust of his coaches at the major junior level. – Corrado Micalef, CSR Scout, Atlantic Division

Logan Crosby – Weeks Majors – RW
Logan is a good skater who is growing into his size. He has great hockey sense and is able to use it to generate chances for himself, as well as for his teammates. He reads and thinks the play well at both ends of the ice.

A right-handed shot who has the ability to handle the puck as well as he shoots it, he’s already shown that he knows how to score. As he continues to grow his game and his strength, he will be someone to keep an eye on. – Taylor Burke, CSR Scout, Nova Scotia Region

Xavier Daigle – Lévis Chevaliers – LHD
Xavier is a defenceman who has a good first pass and good mobility. He makes good decisions with the puck which allow him to make good offensive breakouts.

He has a good shot and a good feel for the game that usually put him on the right side of the puck. By improving his physical strength, he will be able to offer some important minutes to the team that will select him in the upcoming draft. – Steve Gosselin, CSR Scout, Quebec Region

Vince Élie – Laval-Montréal Rousseau-Royal – RW
Vince Élie is a dynamic winger who is solid on his skates. His quick changes of direction with the puck throw off the opposing defence. He has good hands and a very good potential offensively but remains reliable in his defensive zone.

Vince has good vision and is very creative with the puck. He knows how to stand out in tight spaces, and he has a terrific scoring touch. – Daniel Noonan, CSR Scout, Quebec Region

Kyle Hagen – Lac St-Louis Lions – G
Kyle is a quick and explosive goaltender with good lateral movement, which allows him to excel on rebounds and secondary shots. He has a strong base position and good hands but needs to work on his overall reading of the game.

He has a tendency to drop back when the puck is near him which can make him vulnerable in the top portion of the net. Regardless, Kyle is a fighter in his net, which makes him quite spectacular. – Maxime Ouellet, CSR Goaltending Scout

Pierre-Marc Minville – Collège Charles-Lemoyne Riverains – LHD
At 15 years of age, 6 feet 1 inch tall and 200 pounds, Pierre-Marc has the physique for the job. He is very strong; he is a force of nature. Pierre-Marc has a good shot and works well in one-on-one situations.

At the Quebec Games in Quebec City in 2019, he excelled at five-on-five and on special units. He is not afraid to pay the price and block shots as a calm and very reliable defenceman. If he makes the most of his qualities, he is destined to become a high end defenceman in the QMJHL. – Frédéric Simard, CSR Scout, Quebec Region

Will Scott – St-Andrew’s College – LHD
Scouts may have a tough time assessing Will Scott’s talent due to a lack of games at Saint Andrew’s College so far this season, but one thing is for certain – do not sleep on him. The 5′10’’, 160lbs defenceman from St. John’s is an above-average skater both ways who can get out of the starting blocks in a hurry. Will has natural strength and was a minute-eater in U15 AAA just one season ago.

His skating, active stick in the defensive zone and overall physical strength really showed at the 2020 Ice Jam, where he was frequently tasked to play against the other teams’ top units. Teams who do their due diligence on Will Scott will recognize that there’s value to be had in calling his name at the draft. – Andrew Pearcey, CSR Scout, Newfoundland and Labrador Region