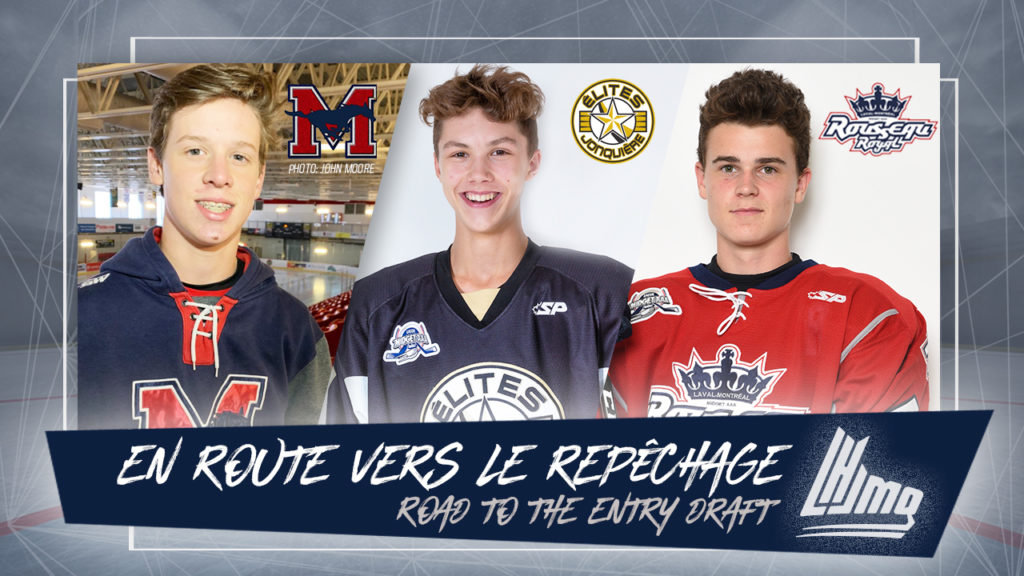 Due to the unfortunate COVID-19 pandemic, playoffs have been cancelled in Midget hockey across the nation.

As many QMJHL draft prospects were battling for league titles, it was a final chance for scouts to observe how the next wave of bright stars handled the pressure and intensity of playoff hockey. Now, with no more games left to play, regular season performances have become much more important to this year’s draft class.

As always, this month’s prospect rankings are in alphabetical order.

Dylan Andrews possesses elite level speed coupled with a very accurate shot. The smooth skating center has great puck skills in traffic and doesn’t shy away from the dirty areas of the ice. He’s working extremely hard on developing a solid two-way game, which has seen tremendous progression.

Andrews makes every player around him better and has the skill and compete level that will certainly translate to the next level. In 35 regular season games with the Wolfpack, he scored 19 goals and added 17 assists for 36 points.

When it comes to analyzing today’s top prospects, Justin Cote continues to prove that size doesn’t matter; it’s all about skill and compete level! The Grenadiers forward is a bonafide sniper who possesses an exceptionally heavy and accurate shot for his size.

The highly skilled diminutive center averaged a point a game with the Grenadiers and finished second on his team in goals scored. He finished the regular season with 24 goals and 12 assists for 36 points in 31 games with Chateauguay.

Vincent Fillion has all the necessary attributes to be a star netminder at the next level and beyond. “Vincent has above average rebound control and he’s always square to the shooter”, said one QMJHL Scout.

“Sometimes, he looks like he could put more intensity in his game. But that’s just standard for a goalie who’s as technical as him. He plays just like [current Moncton goaltender] Rodrigue.” In 22 regular season appearances for the Estacades, Fillion finished with a tremendous 2.07 goals against average and a QMAAAHL second-best save percentage of .928%.

While he stands 6’4’’, Maveric Lamoureux is very mobile for his size. The blueliner thinks the game very well and he has a solid first pass. But the most intriguing aspects of his game are clearly the physicality and grit that he brings every time he steps on the ice.

It’s not all about the numbers when considering Lamoureux’s impact as a defensive defenseman. He possesses a hard and crisp shot and he is able to chip in offensively when needed, as shown by his 14 points in 38 games this season.

Antonin Verreault is an offensive force. He may be considered as undersized, but his skill, determination and compete level truly jump off the page.

“Antonin is the smartest forward in the draft”, said one QMJHL scout. “He works hard every game and possesses elite level vision and hockey sense. You need to be ready and have your stick on the ice, because this kid will hit it.”

Tristan Luneau is a top ranked prospect that possesses all the tools to be an extremely effective player at the next level. He’s a puck-moving blueliner that has an unreal two-way game.

“Tristan is highly skilled. He’s the full package,” one QMJHL said. “He can play any style, offensive or defensive, and he’ll be solid at both.”

Luneau has an uncanny ability to control the pace of play every time he’s on the ice. In 37 regular season games this year, he scored six goals and added 24 assists for the Estacades.

Michael Mastrodomenico has tons of potential and he is improving every time he’s on the ice. His ability to anticipate and execute plays in a calm and relaxed manner has impressed scouts throughout the season.

“Michael is a really good puck mover and he’s been progressing very well defensively,” one QMJHL scout said before adding that he possessed great vision and skating ability. The strong two-way defender has solid puck skills. In 42 games this season, Mastrodomenico had five goals and 12 assists.

Samuel Savoie plays with an edge and the speedy forward is very effective when he’s on his game. He has exceptional outside speed which helps him add the physicality aspect to his style of play.

Always very aggressive on the forecheck, Savoie also has the ability to get to the net any time he wants. He’s good in traffic and possesses good puck skills, the combo allowing him to set up prime scoring chances for his linemates. In 37 regular season games Savoie scored 18 times and added 38 assists.

Scouts are raving about Noah Warren’s game and potential. He possesses all the tools it takes to be a very effective defenseman at the next level. At 6’4’’, Warren has good mobility for his size and a great shot from the backend.

He’s already a great shut down gritty two-way defenseman with plenty of uspide. “Noah skates very well and has great reach,” said one QMJHL scout. “He’ll play in the Q next season for sure. He has pro potential.” Despite ending the season with only one goal and seven helpers, Warren finished second on his squad with 85 shots on goal.

Luke Woodworth teared up the Nova Scotia Major Midget League as a rookie this season. Thanks to his 20 goals and 47 assists in 34 games, Woodworth finished second in the NSMMHL’s scoring race.

He is a speedy forward who is very effective in traffic thanks to his great puck skills and offensive instincts. “Luke is an elite playmaking center who possesses a high hockey IQ, allowing him to find passing lanes to set up his teammates,” said one QMJHL scout. “He’s a pass-first forward with a finishing touch in his own right.”