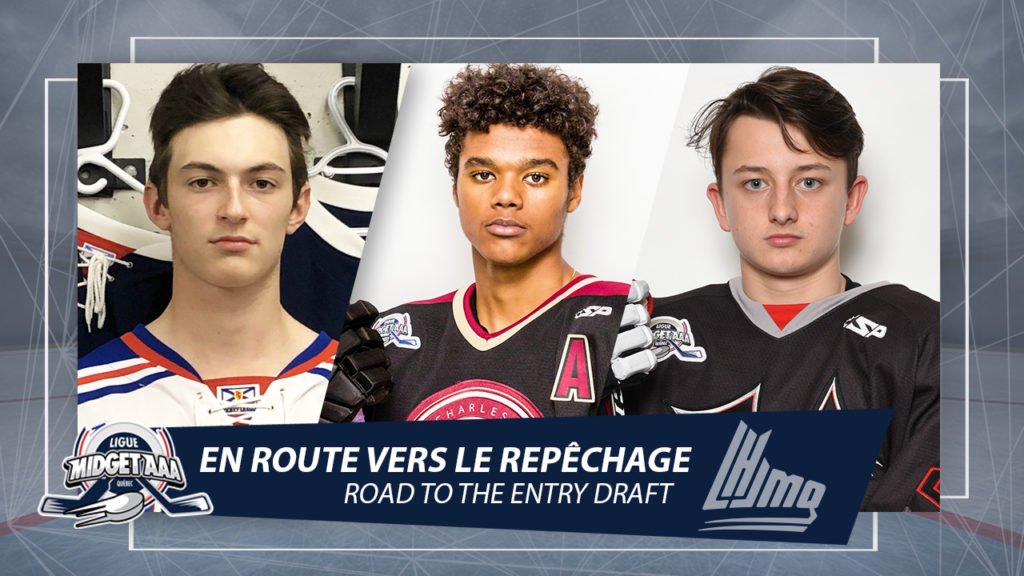 Just over the midway point of the season and with several high-profile tournaments in the rear-view mirror, countless QMJHL draft hopefuls remain focused on helping their respective teams win while preparing for a long playoff push.

This month’s rankings showcases prospects who possess all the attributes needed to excel at the next level. From speed, size and skill, to exceptional leadership qualities and fierce competitors, this group of prospects has it all.

As in past months the prospects are listed in alphabetical order.

Dylan Andrews – C – Cole Harbour Wolfpack
Andrews possesses elite level speed coupled with a very accurate shot. The 5’10’’ center has great puck skills in traffic and doesn’t shy away from the dirty areas of the ice. Andrews is working extremely hard on developing a solid two-way game, which will definitely serve him well at the next level. Andrews makes every player around him better, and has the skill and compete level that will certainly translate to the Q.

Justin Cote – C – Chateauguay Grenadiers
Cote continues to prove that size doesn’t matter, it’s all about skill and compete level. At only 5’5’’ and 140 pounds, he continues to light the lamp at a tremendous pace. The highly skilled diminutive center is averaging a point a game this season with the Grenadiers. Cote is a bonafide sniper with an exceptionally heavy and accurate shot. “He probably has the best shot in the draft,” said one QMJHL scout.

Ryan Hopkins – D – Stanstead College
Hopkins is a perfect example of the new era of offensively gifted puck moving defencemen. He excelled at the Bantam level last season in Nova Scotia and has certainly picked up where he left off playing prep school hockey this season. He is a big strong two-way defenseman who is a superb skater with a weapon of a shot. Hopkins projects to be a top pairing D-man with his full 200-foot game.

Maveric Lamoureux – D – Jonquiere Elites
At 6’4’’, Lamoureux is certainly hard to miss. He is a great skater and thinks the game very well. While he possesses a great shot from the point, the most intriguing aspect of his game is clearly the physicality and grit that he brings every time he steps on the ice. “He will make guys pay physically. The sky is the limit for Lamoureux,” said one QMJHL scout.

Yoan Loshing – C – Mississauga Senators
Yoan Loshing’s hockey sense is off the charts, it’s next level actually. At 5’8’’, Loshing brings a great blend of skill and he’s shown great positioning in all situations. While he’s developing into a great two-way player, it’s his speed and explosiveness that truly jumps off the page when you watch him play.

Tristan Luneau – D – Trois-Rivieres Estacades
Luneau is a special player with elite level skill. He is a high-level prospect that possesses all the tools to be an extremely effective player at the next level. Luneau is averaging just shy of a point per game this season and controls the pace of play every time he’s on the ice. The young defenceman who played MIdget AAA as an underager last season is also very physical, which will serve him well in the long run.

Samuel Savoie – C – Moncton Flyers
Sam Savoie always plays on the edge but the speedy forward is very effective when he’s on his game. Savoie has exceptional acceleration to the outside and isn’t scared to mix it up physically. At 5’9”, Savoie is very aggressive on the forecheck and has the ability to get to the net any time he wants. He’s good in traffic, possesses good puck skills and vision and loves to take matter in his own hands when his team is down.

Antonin Verreault – LW – St-Eustache Vikings
Verreault is an offensive force. He is averaging over a point a game for the Vikings and possesses an elite hockey sense. Standing 5’6’’, Verreault may be considered as undersized but his skill, determination and compete level truly jump off the page. One QMJHL scout may have paid Verreault the ultimate compliment: “You need to be ready and have your stick on the ice, because this kid will hit it.” Elite level vision and hockey IQ, coupled with great speed, that’s Antonin Verreault.

Noah Warren – D – College Charles-Lemoyne Riverains
Scouts are raving about Noah Warren’s game and potential. “He has pro potential,” one QMJHL scout even said. Warren possesses all the tools it takes to be a very effective defenceman at the next level. At 6’4”, he has good mobility for his size and a great shot from the backend. Warren has the potential to be a gritty stay-at-home defenceman at the next level.

Luke Woodworth – C – South Shore Mustangs
Woodworth is tearing up the Nova Scotia Major Midget League this season with an astonishing 66 points in 33 games. The skilled and speedy forward is very effective in traffic and has great puck skills and offensive instincts. An elite playmaking center who possesses a high hockey IQ, he’s quickly able to find passing lanes to set up his teammates. “Woodworth will be quarterbacking powerplays for many years in the QMJHL,” said one scout. Woodworth is an underrated skater, using his great edge control to buy time and make plays.