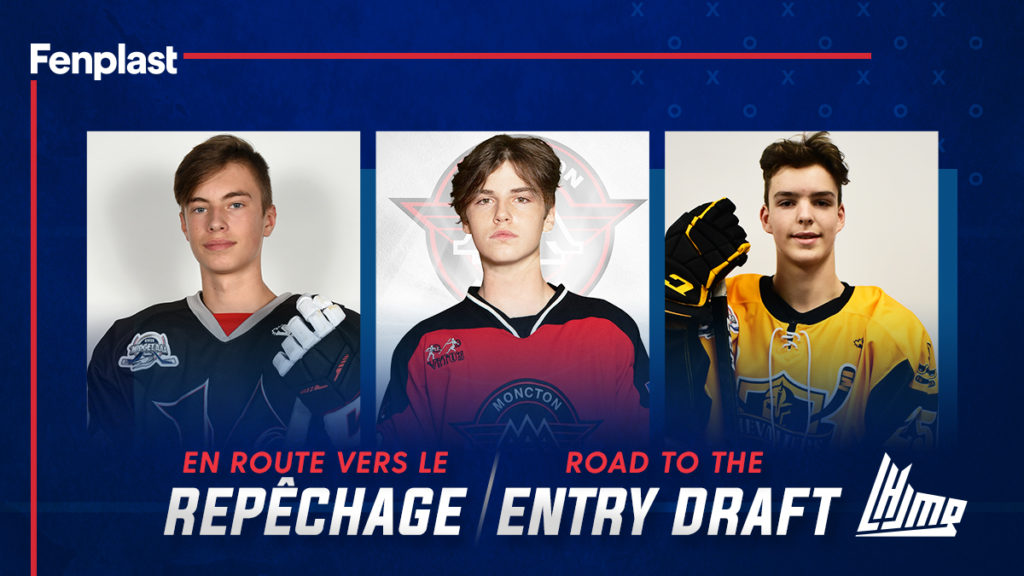 Despite very limited showing due to the exceptional circumstances surrounding the current regular season, some of the QMJHL’s top prospects from Quebec and the Maritimes have been doing their best to catch the attention of regional scouts.

As we await for the final list from the QMJHL’s Central Scouting to be published, this month’s prospects are listed in no particular order:

Xavier Farrah – Moncton Flyers – Goaltender
Xavier is a goalkeeper with a very good structure. He is precise in his movements and constantly faces the puck. His reading of the game is on point and his hands are active in addition to being well positioned in front of his body.

He has powerful legs, which gives him speed and good mobility. One of the best prospects from the Atlantic provinces in his position, he has the potential to become a solid goaltender in the QMJHL. -Maxime Ouellet, CSR Scout, Goaltenders

Bradley Nadeau – Fredericton Caps – Centre
Bradley Nadeau has a way of making tough plays look easy or routine. He is always going at full speed and has a next level ability to process the game in all three zones. He’s an offensive threat every time he’s on the ice because of his elite level puck skills, skating ability and compete level. He is a tremendous passer and playmaker, but also possesses a cannon of a shot.

His size has been called into question throughout his career, but it doesn’t take too long for that perceived weakness to be discredited. His talent, compete level and intensity set him apart from other players his age. Nadeau is a great competitor and has a very bright future in the game. -Craig Eagles, CSR Scout, New Brunswick Region

Natan Éthier – St-Eustache Vikings – Winger
During the pre-season games, Natan showed a lot of maturity in his game. Although he is left-handed, he is used on both left and right wings and takes very good decisions on the defensive side.

In the neutral zone or even in a transition situation, he quickly analyzes information on his opponents and teammates and adjusts his defensive position accordingly to prevent the opponent from progressing. In an offensive situation, he supports his teammates effectively and takes a good read of the options available to him. He also executes everything at top speed, whether it’s passing or shooting. -Claude Gosselin, CSR Scout, Quebec Region

Maxime Coursol – St-Eustache Vikings – Winger
Maxime is a right-handed forward with great offensive qualities. He controls the puck well and is able to create space offensively. He likes to get in front of the opposing goaltender in order to obstruct his view and deflect pucks.

He shows character and seems to always have fun when he’s on the ice. He has a scorer’s touch in addition to being a responsible player in all three zones. Although his skating is not the most fluid, it remains fast and efficient. He has all the potential to suit up at the next level. -Daniel Noonan, CSR Scout, Quebec Region

Étienne Morin – CIHA U18 Voyageurs – Defenseman
Étienne Morin is a big-bodied left-handed defenseman who likes to carry the puck and join the rush. He has a good, low and precise, shot that he likes to direct towards the net. In hockey terms, he is said to have a good first pass.

In the short term, he will have to work on his skating if he hopes to move on to the game’s next level, more specifically on his backwards skating, his pivots, and his mobility. His positioning without the puck and his active stick in the defensive zone are facets of his game on which he will have to pay attention, as well as his commitment to defend his territory. Playing in Ontario for the past two years, he has enjoyed greater visibility with scouts due to the different health measures in that province. -Pierre Cholette, CSR Director

Francis Durocher – Collège Charles-Lemoyne Riverains – Defenseman
Francis is a defenseman with a lot of potential. Effective over 200 feet, there are plenty of details in his game that may go unnoticed by many. He is a determined defender who accepts to sacrifice himself for his team. In 2019-2020, he had an excellent season at the Bantam AAA level while being used in all situations.

The right-hander has dominant qualities including an excellent feel for the game, with or without the puck. He’s very good in one-on-one situations, has an active stick and a great first pass. In a very short time, he improved his footwork, speed and mobility. He has an impeccable work ethic and his development is impressive. To improve his game, however, he will need to increase his intensity level. -Frédéric Simard, CSR Scout, Quebec Region

Thomas Hébert – Châteauguay Grenadiers – Defenseman
A right-handed defenseman with an imposing physique, Hébert has many of the qualities sought in a rearguard. He plays with intensity and loves the physical play. His opponents quickly realize that they have to pay the price when standing with him in front of the net or in the corners of the ice.

He executes his first pass well and supports the attack sparingly. He has been working to develop his speed as well as his mobility. He is definitely an interesting choice for a team that wants to improve its group of defensemen. -Benoît Payment, CSR Scout, Quebec Region

Émile Duquet – Lévis Chevaliers – Winger
A player with good speed and great intensity, he is committed and very responsible defensively. Blessed with a good wrist shot, he generates scoring chances and loves to attack the net. He reads the game well and always supports his teammates. His character is what makes him an excellent competitor on the ice.

While he is still working on his skills for the next level, he will definitely be a player who will have his chance in the QMJHL. -Steve Gosselin, CSR Scout, Goaltenders

Jake Todd – Cole Harbour Wolfpack – Centre
Jake is a dynamic playmaker with a lot of jump in his step. The moment that he hits the ice, he makes you take notice. He is a competitor in all aspects of the game and plays bigger than his stature. This was evident as he finished second in NSU18MHL scoring as a rookie this year.

His high-end talent, coupled with his hockey IQ, allow him to control the game. He has the ability to be a difference maker each and every shift by using his creativity and puck skills to make opportunities for himself and his teammates. Jake’s talent, work ethic and skating are what make him such an intriguing prospect. -Taylor Burke, CSR Scout, Nova Scotia Region