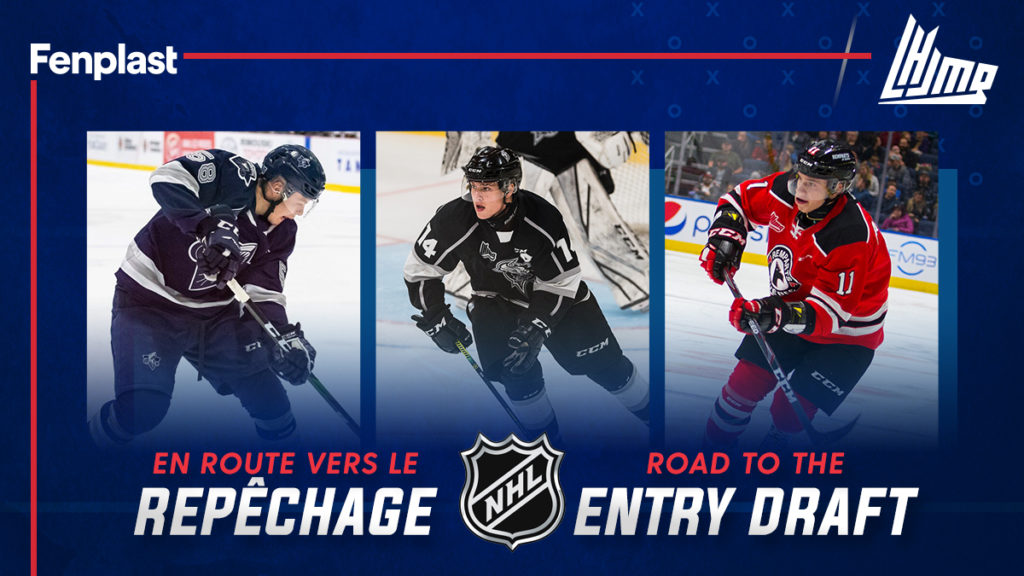 With the 2020 NHL Entry Draft now in the rear-view mirror, the next crop of draft eligible prospects can take centre stage in the QMJHL.

The 2021 QMJHL draft class consists of many highly touted forwards and transitional defensemen. Because of limited viewings in the early stages of the season, this month’s prospect rankings will be listed in alphabetical order.

Belliveau is coming off an outstanding season with the Océanic which saw him tally 53 points in 62 games, tied for most among all rookie skaters. His shot, offensive instincts and ability to spot the open man in all three zones are certainly his strongest attributes and will serve him well at the next level.

The Orford, Quebec product will undoubtedly play in every situation imaginable for the rebuilding Océanic this season. Already a solid two-way rearguard, the 17-year-old will have to continue to work on his explosiveness before playing at the next level.

Belliveau’s teammate Zachary Bolduc may have missed a few games at the start of last season, but he certainly made up for lost time following his QMJHL debut. The elite-level forward nearly had a one point per game average by reaching the 30-goal mark and adding 22 assists in 55 games played. Bolduc’s skill, speed and relentlessness in all three zones have many scouts extremely excited by his potential.

The Trois-Rivières, Quebec native’s scoring touch, grit and pucks skills in high-traffic areas will certainly translate to the next level. While Bolduc still needs to gain a little strength and weight, the 17-year-old already possesses many of the intangibles it takes to excel at the pro level.

Xavier Bourgault’s compete level rivals his skill, which makes for a lethal combination. The elite-level scorer is focused on following teammate Mavrik Bourque’s footsteps and becoming the next Cataractes forward to be drafted in the NHL Draft’s opening round.

Bourgault can score from anywhere on the ice. His puck skills are off the charts and he possesses a very accurate pro-like shot. After finding the back of the net 33 times last season, the 18-year-old could very well eclipse the 40-goal mark this campaign. The sky is the limit for Xavier Bourgault.

Dean does everything at top speed; that’s what makes him lethal and such a special talent. Newfoundland’s next top prospect possesses a similar skill set to that of another well-known local kid, 2020 New Jersey Devils first rounder, Dawson Mercer.

Speed, elite-level puck skills and a solid scoring touch, Zachary Dean can practically do it all. The 17-year-old doesn’t shy away from high traffic areas, if anything, he relishes them. The Olympiques assistant-captain thinks the game extremely well and has all the makings of a highly effective pro.

Zachary L’Heureux turned in a dominant performance with the high-flying Moncton Wildcats last season, tying Belliveau for the most points tallied by a rookie skater with 53 in 55 games played. The high-scoring power forward certainly possesses some of the tools needed to be a solid contributor at the next level.

He combines an amazing compete level with grit and a terrific scoring touch. L’Heureux can contribute in all areas of the game and relinquishes the challenge. While some NHL scouts feel the Montreal, Quebec product needs to work on his explosiveness to excel in the professional leagues, L’Heureux remains one of the most complete draft eligible players in the QMJHL.

A high-flying forward with skill, grit and a knack for finding the back of the net, James Malatesta has turned many heads, with reason, since making his QMJHL debut. The highly effective two-way forward certainly made his presence known last year, scoring 23 times and registering 45 points in 59 games as a rookie.

Malatesta’s speed creates havoc on the forecheck. The Pointe-Claire, Quebec native is above average in terms of creativity and puck skills in traffic and possesses a quick release that makes him a threat to score every time he’s on the ice. As with any young player, Malatesta will look to reach his full potential by contributing more consistently this season.

Olivier Nadeau is coming off a successful rookie campaign with the Cataractes in which he scored 15 goals in 58 games. The ultra-competitive athlete is an effective two-way forward that makes great things happen every time he steps on the ice, drawing him comparisons to Boston Bruins star Patrice Bergeron.

Nadeau’s work ethic, high hockey IQ and accountability in all three zones are unmatched. The product of Saint-Georges, Quebec might not be the flashiest of players, but he’s always around the puck and makes all the right plays when he has it on his stick. The big bodied fifth overall pick of the 2019 QMJHL Draft will continue to work on his speed in open ice to reach his full potential.

The wait is over, Evan Nause has finally arrived in the QMJHL. After spending the past season in the USHL, the blueliner made the decision to come to the QMJHL in early June. The 17-year-old who grew up in Riverview, New Brunswick possesses all the tools to be an ultra effective two-way defender at the next level.

Nause’s vision and superior skating ability certainly set him apart from other defenders his age. The defenseman will have to put on some extra muscle to add a little physicality to his play, but there’s no doubt that given his work ethic and dedication to the game, he will definitely get there. Nause plays a very similar style to that of NHLer Jay Bouwmeester.

Justin Robidas is driven to prove he can play at hockey’s highest level. The highly skilled diminutive forward should easily surpass the point total from his rookie season, one in which he picked up 21 goals and 43 points. Robidas’ speed, relentlessness to hunt down pucks on the forecheck and keen instincts for the game are certainly his strongest attributes.

The 17-year-old’s ability to execute at top speed makes him one of the most lethal offensive forces in the Q. Robidas continues to find ways to get on the scoresheet, no matter the opponent, and that’s why he could very well become an effective pro.

Joshua Roy quietly went about his business a season ago, closing off his rookie campaign with 44 points in 60 games. The highly touted forward doesn’t need to overpower his opponents because he has the smarts to make all the offensive plays that matter. The first overall selection of the 2019 QMJHL Draft has elite-level skill and hockey sense.

Roy will have to be more physically and defensively engaged in all three zones to reach his full potential and the next level, but he possesses the skill and instincts to play pro hockey for a long time.