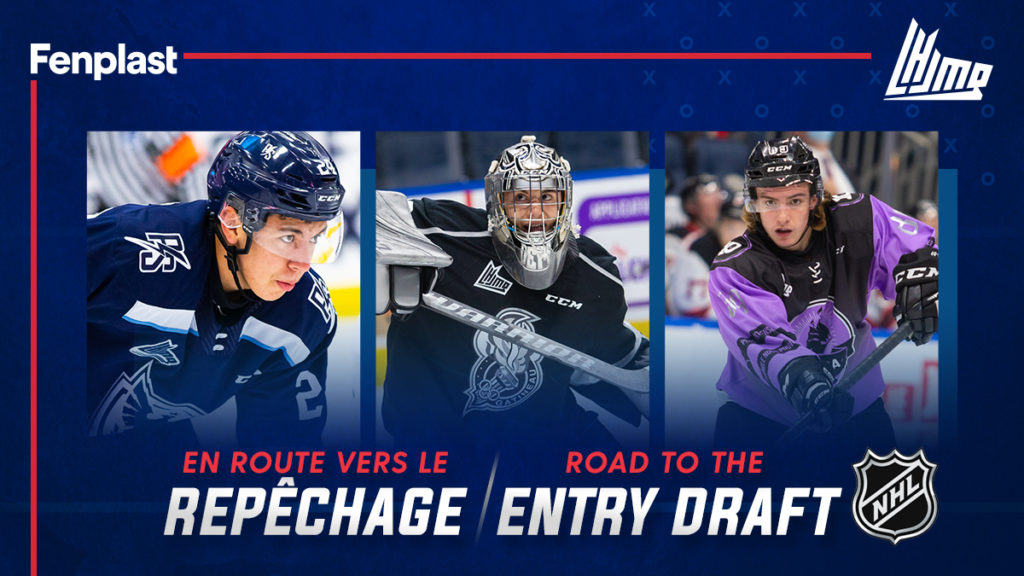 With the QMJHL returning to the ice in many of its markets, some European-born players are ready to kick-off their 2020-2021 campaigns while other NHL draft-eligible prospects will look to build on the few games they have played so far.

While the following players have already been ranked on the NHL Central Scouting’s January list, this month’s prospects are presented in alphabetical order.

Attilio Biasca | LW | Halifax Mooseheads
The native of Zug, Switzerland plays a skilled heavy two-way game, possesses good speed and had good awareness on the ice. At 6’0’’and 183 pounds, he doesn’t shy away from the dirty areas of the ice and possesses solid puck skills in high traffic areas.

The 17-year-old power forward has an incredibly accurate pro release. In 19 games in the U20 Swiss Elite League this season, Biasca had six goals and 12 assists, while the gritty winger was held to only one goal in three World Junior Championship games with Switzerland. Biasca will have to work on his explosiveness to reach his full potential at the NHL level, but he should become a permeant fixture in the Mooseheads top six for years to come.

Lorenzo Canonica | C | Shawinigan Cataractes
After picking up an assist as another member of the World Juniors’ Swiss Team, the Lugano native joins an already deep and skilled Cataractes team looking to make a strong push towards a President Cup. The highly touted center skates extremely well and possesses solid puck skills and hockey sense.

The 17-year-old plays a strong two-way game and has great offensive instincts. In 20 games this season in the U20 Swiss Elite League, the 5’11’’ and 179-pound forward scored 11 goals while adding eight assists. All signs point to Canonica being an impact player for the Cataractes in the second half of the season.

Emerik Despatie | G | Gatineau Olympiques
After being selected 35th overall by the Quebec Remparts in 2019, the goaltender was traded to the rebuilding Gatineau Olympiques in the off-season. It was a tough rookie campaign for the Cantley, Quebec product, who ended last season with a 4-9-0-0 record, a 4.37 GAA and 0.850% save percentage. However, the tides seem to have turned as the young netminder has a 1-1-0-0 record this year to go along with a stellar 1.98 GAA and 0.917% save percentage.

The 17-year-old backstop is extremely athletic, challenges the shooter on every occasion and moves very well in the blue paint. He plays a lot bigger than his 6’1’’, 173-pound frame, but it’s the intangibles that Despatie brings to the game that set him apart; he’s incredibly passionate about the game and the position. His work ethic, coupled with his natural ability and instincts for the position, are second to none.

Fabio Iacobo | G | Victoriaville Tigres
The Saint-Leonard, Quebec product went undrafted after posting a 13-11-4-0 record with a 2.84 GAA and 0.905% save percentage before last season ended due to COVID-19. The 19-year-old is an extremely athletic goaltender that moves incredibly well and possesses a quick glove.

The three-year veteran is very active between the pipes and never quits on pucks. His second effort and compete level is off the charts. At 6’1’’ and 198 pounds, Iacobo’s size may have some scouts questioning his ceiling at the pro ranks, which is unfortunate because this kid is one of the hardest working and most competitive netminders in the QMJHL.

Manix Landry | LW | Gatineau Olympiques
Manix Landry is a coach’s dream. The hard-working skilled winger competes in all three zones and has an incredible knack at making great things happen every time he’s on the ice. At 5’10’’ and 168 pounds, Landry plays a lot bigger than his size would indicate.

Landry skates like the wind and goes to all the dirty areas of the ice to create time and space for his teammates. His puck skills, coupled with his speed off the rush, cause havoc for opponents. He sees the ice very well and distributes the puck effectively and efficiently, but also has an accurate shoot when in stride. The three-year veteran had a breakout season for the rebuilding Olympiques last year scoring 15 goals and adding 25 assists in 59 games.

Viljami Marjala | C | Quebec Remparts
The 17-year-old from Oulu, Finland is a slick playmaking center with great offensive instincts and skills. The smooth-skating center distributes the puck with relative ease and sees plays materialize well before they happen. Marjala also brings a solid physical two-way element to his game but will have to work on his overall quickness and strength to excel at the pro level.

The Remparts have the youngster playing in every situation, which greatly benefits his development. In eight games with Quebec this season, he has one goal and eight assists. Marjala’s vision, passing ability and shot are definitely his strongest attributes and will serve him well in the second half of the season and beyond.

Israel Mianscum | LW | Sherbrooke Phoenix
At 6’2’’, 190 pounds, Israel Mianscum has all the makings of a solid power forward at the next level. The Mistissini, Quebec product recorded only 16 points in 52 games a season ago due in large part to playing on a very deep championship caliber team as a sixteen-year-old.

Nevertheless, Mianscum is a hard-working two-way winger who possesses a powerful skating stride. He has solid puck skills coupled with a great release. The gritty forward should increase his point totals in the second half of the season due to a larger role for the rebuilding Phoenix who selected him 10th overall in the 2019 QMJHL Draft.

Oleksii Myklukha | C | Rouyn-Noranda Huskies
The crafty and smooth-skating center is known for his tremendous vision and hockey sense. The 18-year-old Slovakian appeared in just 21 games with the Huskies last season, recording only two goals and six assists.

However, after adjusting to the North American sized rinks, all signs point to Myklukha having a larger impact during his sophomore season. The highly skilled elusive forward possesses breakaway speed and phenomenal puck skills. At 5’10’’ and 156 pounds, he will have to get a lot stronger to reach his full potential at the next level. Myklukha has played internationally with Slovakia on three separate occasions, the last time being in this year’s World Juniors where he scored one goal in four games.

William Rousseau | G | Quebec Remparts
William Rousseau is still patiently waiting for his opportunity to show what he’s capable of at the QMJHL level. The 18-year-old rookie netminder from Trois-Rivieres, Quebec had only appeared in two career games for the Remparts entering the season, posting a 4.78 GAA and a 0.805% save percentage.

However, the goaltender has had a .920% save percentage or better in every previous season he’s played in at different levels. A 6’1’’ and 173-pound netminder, Rousseau moves well and is technically sound. He has great reflexes, compete level and reads the play well. He has a quick glove but will have to continue to work on his stickhandling to distribute the puck more effectively.

Miguël Tourigny | RD | Blainville-Boisbriand Armada
Miguël Tourigny may have been passed over in the NHL draft a season ago, but the Victoriaville, Quebec native has not given up on his dream of reaching hockey’s highest level. The 18-year-old transitional defender has been tearing up the QMJHL this season, as shown by his seven goals and six assists in ten games played.

At 5’8’’ and 165 pounds, NHL scouts and prognosticators obviously question Tourigny’s size, but that has never limited the blueliner from bringing a physical two-way presence to the game. The extremely mature and cerebral defenceman understands the position so well that he seldomly gets caught or loses a puck battle in the defensive zone. Tournigny’s edge control, awareness and puck skills are truly off the charts.