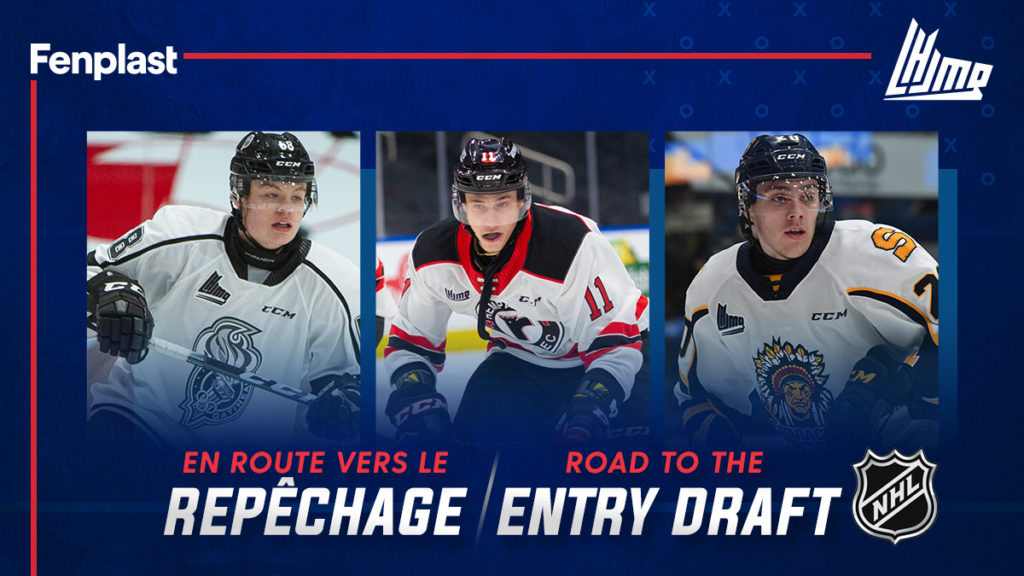 In a year surrounded by so much uncertainty, the QMJHL’s 2021 NHL Draft class continues to create quite a stir. Two high-profile athletes featured in this month’s article have joined new teams, while all prospects are gaining traction with the QMJHL’s activities back under way.

The highly skilled two-way defenceman has scored two goals and picked up one assist in nine games since being acquired by Gatineau from the Rimouski Oceanic. The Fleurimont, Quebec product will be a cornerstone for the young Olympiques defensive corps.

The 18-year-old has worked hard to improve his explosiveness and skating ability which will pay dividends at the next level. Belliveau’s shot, offensive instincts and ability to spot the open man in all three zones continue to be his strongest attributes.

Zachary Bolduc is shouldering most of the load for the rebuilding Oceanic, but the skilled forward is still developing into one of the best two-way forwards in the QMJHL. Bolduc’s skill, speed and accountability in all three zones continue to impress NHL scouts.

The Trois-Rivières, Quebec native’s stats may not jump off the page, but his overall progression is noteworthy. In 18 games this season, the 18-year-old has scored six goals and added seven assists. The sky is the limit for Bolduc.

Xavier Bourgault continues to be a difference maker on a very deep Shawinigan Cataractes team. The elite-level scoring forward has 13 goals and seven assists in 17 games so far this season.

Bourgault can score from anywhere on the ice. His puck skills are off the charts and he possesses a very accurate pro-like release.  Bourgault has the ability to play both forward positions with relative ease, which intrigues NHL scouts. All signs point to the L’Islet, Quebec product being an elusive top six scorer at that next level.

Zachary Dean’s stats may not be off the charts this season, but his overall game still is. The proud Newfoundlander has managed to score three goals and four assists in 13 games. Nevertheless, Dean has blossomed into a great two-way centre for the upstart Gatineau Olympiques.

The 18-year-old does everything at top speed which makes him a lethal threat and a unique talent. Dean’s offensive input shouldn’t decrease his draft stock; the Olympiques’ alternate captain thinks the game extremely well and has all the makings of a highly effective pro.

Zachary L’Heureux’s offensive production cooled off in February, but the power forward still possesses all the tools needed to be a solid contributor at the next level. In 21 games, the 18-year-old winger has scored ten goals and picked up eight assists.

The Mercier, Quebec product has worked diligently on his explosiveness and skating stride this season, which will undoubtedly help him excel in the pro game. L’Heureux still remains one of the most complete draft eligible players in the QMJHL.

Malatesta’s speed, agility, grit and scoring touch jump off the page every time he laces them up. The Kirkland, Quebec native is flourishing in his sophomore season which has seen his draft stock continue to rise.

Olivier Nadeau is having a breakthrough season for the Shawinigan Cataractes. Nadeau is arguably one of the best two-way forwards in the QMJHL. His playmaking ability and scoring touch speak for themselves as he is currently leading the Cataractes in scoring with 26 points (six goals, 20 assists) in 20 games.

The 18-year-old’s work ethic and high hockey IQ are truly unmatched. The Lac-Etchemin, Quebec product might not be the flashiest player out there, but he sure knows how to play the game the right way, which will definitely translate to the next level.

Evan Nause is on a different planet right now. The 18-year-old who grew up in Riverview, New Brunswick has seen his draft stock soar after an amazing stretch of inspired hockey. The skilled two-way defender has picked up ten assists in eight February games.

Confidence is paramount for any NHL prospect and Nause has definitely found his as of late. His vision and playmaking ability are a step above as the rangy 6’2’’, 186-pound rearguard has been excelling in all three zones. But Nause’s stellar play shouldn’t come as a surprise given his amazing worth ethic on and off the ice.

The highly skilled diminutive forward may have an incredible supporting cast around him in Val-d’Or now, but he is still leading the way when it comes to offence. Robidas is currently tied for the team lead with 24 points (12 goals, 12 assists) in 24 games.

Robidas’ speed and relentlessness in all three zones continue to draw attention from NHL scouts. A natural leader with the Foreurs, Justin Robidas is a special player who will undoubtedly carve out an outstanding professional career based on all the intangibles he possesses.

Joshua Roy has not been fazed by his change of scenery. The Saint-Georges-de-Beauce, Quebec product has been on fire after being acquired by the Phoenix from the Saint John Sea Dogs during the final days of the QMJHL Trade Period.

The first overall selection of the 2019 QMJHL Draft has seven goals and four assists in ten games since joining Sherbrooke. Roy possesses the scoring touch, skill and offensive instincts to play at hockey’s highest level. NHL scouts will continue to watch his progression more closely than ever before over the upcoming months.