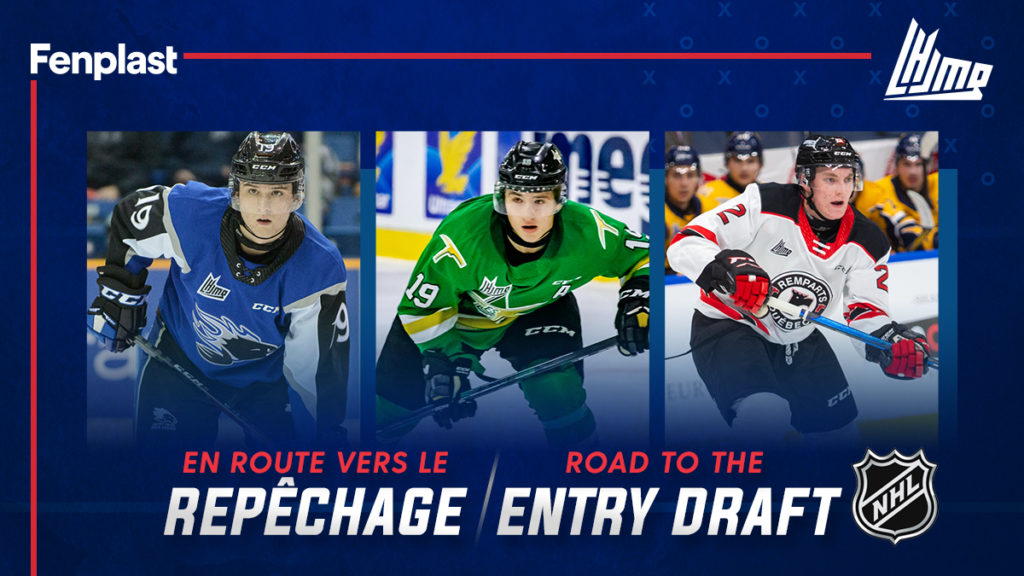 With the pandemic wreaking havoc on the current season, the QMJHL’s 2021 NHL Draft class has already faced its share of adversity. It has been impossible to get into a flow, but these NHL prospects have made the best of a difficult situation, showcasing their talent when they have had a chance to play.

Belliveau is off to a slower start this season than last when it comes to point totals. In 16 games, the Orford, Quebec product has only one goal and four assists. He will have to continue to work on his explosiveness and stride to excel at the pro level. The 17-year-old defenceman will continue to benefit and become a more complete two-way presence by playing in every situation this season for the Océanic. His vision and the quality of his passing are what truly sets him apart.

Evan Nause is not lighting the world on fire offensively, but he is becoming a solid two-way presence on the Remparts backend. The 17-year-old who grew up in Riverview, New Brunswick possesses the tools to be a reliable defender at the next level. In eight games, Nause has only recorded one goal and one assist, but it is his play in all three zones that continues to impress scouts. His vision and instincts for the game are his strongest attributes.

The first overall pick of the 2019 QMJHL Draft was starting to take flight when the season was paused. The Saint-Georges-de-Beauce, Quebec native had recorded nine goals and eight assists in 15 games for Saint John. Roy has never overpowered his opponents, instead relying on his elite-level skill and hockey sense to be an effective and efficient point-getter and playmaker. Roy will have to become stronger on the puck to reach his full potential at the next level but has showed marked improvements on the defensive side under new Sea Dogs head coach Greg Gilbert, a three-time Stanley Cup Champion.

James Malatesta’s two-way presence and relentlessness in all three zones have NHL scouts excited. He has only played eight games so far, scoring one goal and adding two assists, but it is the intangibles he brings to the ice that are starting to separate him from others. The Pointe-Claire, Quebec product’s speed creates havoc, and his scoring touch, creativity and puck skills in traffic make him a threat every time he is on the ice.

Olivier Nadeau is becoming one of the best two-way centres in the QMJHL. The product of Saint-Georges, Quebec might not be the flashiest of players, but he is always around the puck and makes all the right plays when he has it on his stick. In ten games so far for the Cataractes, Nadeau has notched three goals and eight assists. His work ethic, high hockey IQ and accountability in all three zones are unmatched.

Justin Robidas continues to play inspired hockey this season for the championship-calibre Foreurs. The diminutive forward already has eight goals and 12 assists in only 15 games. His speed and elite level instincts are certainly his strongest attributes, but it is his unwavering determination and drive that set him apart from other prospects. The 17-year-old Texan finds ways to get on the scoresheet, no matter what his opponents throw his way.

Zachary Dean does everything at top speed, which is what makes him so lethal. Newfoundland’s next top NHL prospect has only played six games thus far, scoring two goals. The 17-year-old centre has elite-level puck skills and does not shy away from high-traffic areas. Dean will have to get stronger and continue to work the defensive side of his game to play through the middle at the next level.

Xavier Bourgault can score from anywhere on the ice. In ten games this season, he has seven goals and five assists. The 18-year-old speedster from L’Islet, Quebec has what it takes to be a top-six forward at the next level. It is unclear where NHL teams will elect to play Bourgault given his prowess at both forward positions. All signs point to Bourgault being selected in the first round of the NHL Entry Draft.

Zachary Bolduc has only suited up for seven games so far for the Océanic this season, scoring three times and adding one helper. Bolduc’s skill, speed and relentlessness are by far the Trois-Rivières, Quebec product’s strongest attributes. Although Bolduc still needs to gain a little strength and weight, the 17-year-old already possesses many of the intangibles it takes to excel in the pro ranks.

Zachary L’Heureux was on fire before the league took its extended pause. In 12 games, the gritty 17-year-old from Montreal had found the back of the net seven times while adding six assists. Despite L’Heureux’s speed and explosiveness continuing to be small areas of concern for some NHL scouts, the power forward remains one of the most complete draft eligible players in the QMJHL.