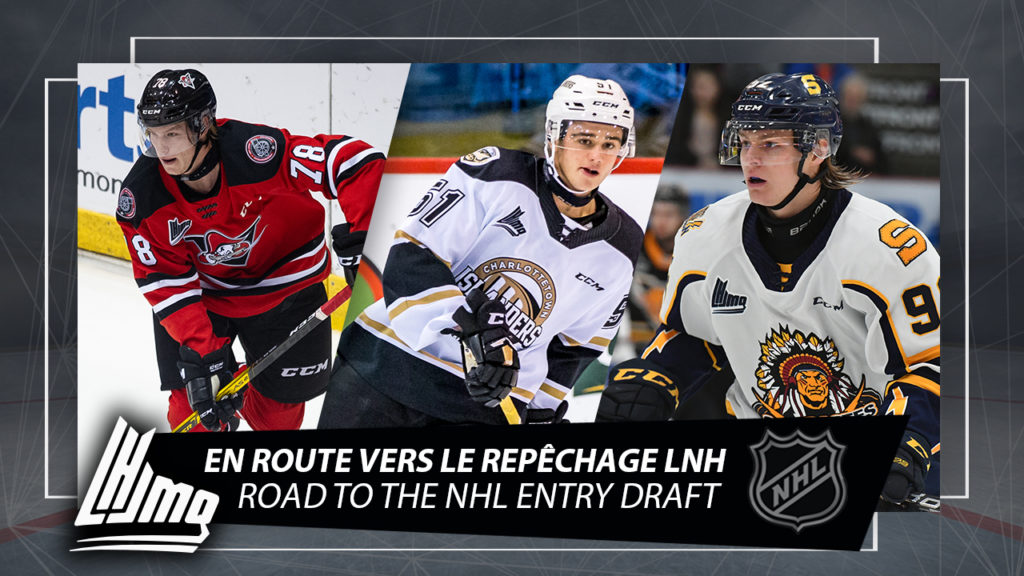 The NHL’s Central Scouting Midterm Rankings were released two weeks ago and possible outcomes for the upcoming NHL Draft are getting clearer and clearer. The letter evaluations have gone by the wayside. It’s all about the numbers now.

All the attention is ramping up as the draft eligible prospects in the QMJHL are doing everything in their power to get noticed by NHL scouts. The road to the 2020 NHL Entry Draft is taking shape.

10.  Thimo Nickl – D – Drummondville Volitgeurs
Nickl, a native of Klagenfurt, Austria, continues to be a difference maker on the Voltigeurs blue line and plays in every situation. The 18-year-old right shooting rearguard has 28 points in 42 games. Nickl is a smooth skating and puck moving two-way defender. He possesses an above average shot from the point and thinks the game very well.

9. Ryan Francis – RW – Cape Breton Eagles
Ryan Francis is the straw that stirs the drink in Cape Breton. The highly skilled elusive forward continues to put up impressive offensive numbers while logging big minutes in all situations for the Eagles. Francis’ compete level, drive, determination and willingness to go to the dirty areas of the ice continue to impress NHL Scouts.

“Ponomarev has all the offensive skills; soft hands, great shot and he’s a good passer as well,” said one NHL Scout. The 18-year-old is known to see the ice incredibly well and he will likely get more opportunities offensively in the second half of the season.

7. Lukas Cormier – D – Charlottetown Islanders
After suffering a broken foot earlier in the season, Cormier has seamlessly picked up right where he left off. The dynamic skating defender has drawn many comparisons to NHL standouts like Samuel Girard and Torey Krug. Cormier has the uncanny ability to control the pace of the game and is extremely accountable in his own zone. He doesn’t back down from the physical aspect of the game and has tremendous positioning.

6. Mavrik Bourque – C – Shawinigan Cataractes
Mavrik Bourque is a star in the making. The highly skilled speedster is relentless on the forecheck and his moves are extremely calculated when it comes to the offensive side of the game. He’s becoming a complete 200-foot player who has the willingness to go to the dirty areas of the ice.  Bourque’s ability to play in traffic, coupled with his breakaway speed and scoring touch, continue to amaze NHL Scouts. Don’t look at his size, don’t look at the numbers, just watch how this young man plays the game; he does things the right way.

5.  Jeremie Poirier – D – Saint John Sea Dogs
Jeremie Poirier is a natural when it comes to being an offensive defenseman. The highly skilled defender possesses terrific puck skills and offensive instincts. He’s a terrific quarterback on the power play and should continue to put up massive point totals in the second half of the season. While the Salaberry-de-Valleyfield, Quebec product’s offensive skills are undeniable, tons of NHL Scouts will continue to converge on the Port City to evaluate the talented defender’s progress and how he does on the defensive side of the puck.

4. Justin Barron – D – Halifax Mooseheads
With Justin Barron dealing with a blood clot that has him sideline indefinitely right now, it’s still unclear if the Mooseheads star defenseman will return to action this season or not. But NHL Scouts have been watching Barron for quite some time now, and they know exactly what the highly skilled puck moving defenseman can do. Barron’s skill set is off the charts. When healthy, the Halifax, Nova Scotia product is arguably the most complete blueliner in the QMJHL.

3. Hendrix Lapierre – C – Chicoutimi Sagueneens
No one has ever questioned Hendrix Lapierre’s talent, skill, ability and passion for the game. But unfortunately, right now, the scouting world is questioning his injury history. Lapierre’s ability to read the play and spot the open man while at top speed is truly mesmerizing. That is partially why, despite not playing since late November, he’s still ranked as the third best prospect in the QMJHL. Lapierre has game-breaking talent, which can no doubt translate to the next level.

2. Dawson Mercer – C – Chicoutimi Sagueneens
Dawson Mercer has a motor that never stops. It’s exactly like his passion for the game; relentless. His draft stock continues to soar because the proud Newfoundlander does everything at top speed on the ice. His skills and drive have NHL scouts raving about him. Once Mercer officially gets settled in with the Sags, expect the talented offensive genius to dominate the second half as NHL Scouts get to witness all the upside and potential in his game.

1. Alexis Lafrenière – LW – Rimouski Oceanic
What hasn’t already been written about Alexis Lafrenière? The humble kid from Saint-Eustache, Quebec has taken the hockey world by storm and there’s no doubt Lafrenière will be the first overall pick come June. His elite level of skills has prognosticators already comparing him to the some of the NHL greats. It’s easy to see his skills, they jump off the page. But the most telling aspect of Lafrenière’s game is his compete level and his relentless desire to be the best. Those are what make him truly special.